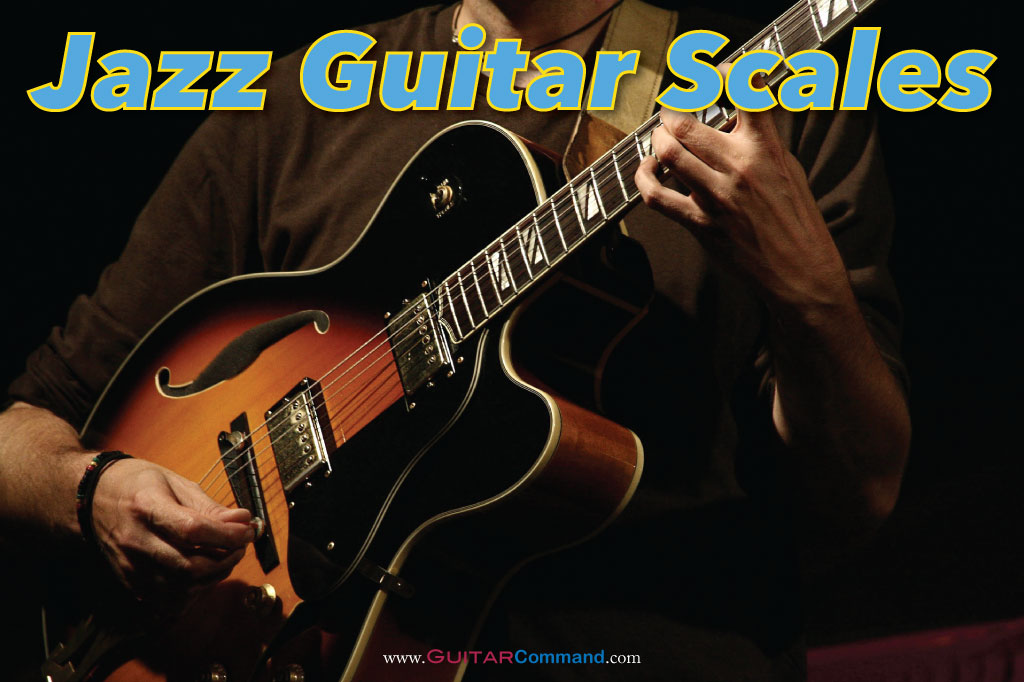 This page contains jazz scales guitar notation with tab, diagrams and information on how to use scales in jazz improvisation.

Introduction to Jazz Scales on Guitar

Jazz guitarists improvise using many different guitar scales. Although many jazz guitarists concentrate on using arpeggios rather than scales as a basis for improvisation, most will also have a large arsenal of guitar scales and licks that they can call on.

On this page, we’ll look at some of the most widely-used jazz guitar scales and explain how they are used.

We’ve provided tab, notation and diagrams for all of the scales. This gives you the opportunity to play the scales for yourself and hear how they sound, even if you don’t read music.

Master The Fretboard With Guitar Command

In jazz, the use of scales–as opposed to chords and arpeggios–as a basis for improvisation is known as ‘horizontal’ playing. (By contrast, using chords / arpeggios is known as ‘vertical’ playing.)

‘Horizontal’ lines can be created with many different guitar scales, the most commonly-used of which are listed in the next section.

If you want to start playing jazz, you should aim to be familiar with the major scale, pentatonic minor scale and blues scale. In fact, you could play great jazz guitar solos using just these three scales. You’ll find fretboard patterns and TAB for them below.

An important skill in jazz guitar is being able to access these (and other) scales wherever you are on the guitar neck. Jazz music is constantly changing key. Your lines will flow much better if you’re not constantly having to make large jumps up or down the guitar neck. In order to avoid having to do this, you should try to learn a number of different patterns for each scale.

Blues music was a huge influence on jazz, and you’ll hear the blues scale being used in nearly every jazz style.

The pentatonic minor scale, on which the blues scale is based, is another important scale in jazz. As well as being a good choice for soloing over the ‘1’ chords in minor keys, it has several other uses.

For a modern jazz sound, try playing a pentatonic minor scale a minor 3rd above a dominant 7 chord (e.g. the ‘V’ chord in a ii V I progression). It produces very jazzy-sounding flat 9, sharp 9, flat 5 and sharp 5 notes which, if used with care, can create some interesting lines.

For Notation & TABs for these guitar scales, see the following pages:

Modal scales are scales derived from other scales (in particular the major scale). We won’t go into how modes are formed here; if you want to find out more about them then check this page out: Guitar Modes.

Despite being based on the notes of a major scale, each mode has its own distinctive tone. One of the best ways of learning modes is to learn the major scale patterns, then use these as a basis for playing modes.

When doing so it’s important to treat each modal scale as a scale in its own right, rather than just a ‘major scale that starts and ends on a different note’.

A whole genre of jazz, known as ‘modal jazz’, is based on using the sound of modes without the emphasis on playing through key changes that is present in other jazz styles. Modal scales can bring their unique sounds over unchanging chord sequences or an ostinato (a repeated line or riff).

Probably the two most important modal scales in jazz are the Dorian and Mixolydian modal scales. As well as being used in modal jazz type improvisation, these two scale types are also used in most other varieties of jazz.

An additional note can be added to both of the above scales to create ‘bebop’ scales. You’ll find out more about bebop scales further down the page.

You can find out more about improvising with these scales on the following pages:

The Lydian mode is often used over major chords. It varies from a major scale by having a sharpened 4th, giving it a slightly more ambiguous, jazzy sound.

Guitar Command has produced special backing tracks to allow you to learn, and improvise with, modal scales. You can listen to samples here: Guitar Modes Backing Tracks.

Bebop scales are used by jazz musicians to create smooth, flowing lines. Essentially, they are major scales / modes of the major scale with an extra note added. The extra note produces a pleasing chromatic effect, and also helps improvisors finish their improvised phrases on the desired beat.

A bebop dominant scale is a mixolydian scale with an additional natural seventh note. The scale spelling is 1, 2, 3, 4, 5, 6, b7, 7, 1. This scale is often used over dominant 7th chords such as those in a 2 5 1 progression. Play the scale below to hear how it sounds.

There are many other scales used in jazz guitar improvisation. The final two we’re going to look at in this lesson are the whole tone scale and the diminished scale.

The whole tone scale is a mysterious-sounding scale that can sound good when played over dominant chords. It contains the flat 5 and sharp 5 altered tones.

Tab and Diagrams for these two scales can be found here:

Altered notes add ‘tension’ to lines or phrases. Tensions are a kind of ‘controlled dissonance’ and are at the heart of the jazz sound.

We’ll now take a very brief look at how scales are used in jazz improvisation.

You can find out more about the 2 5 1 progression here: 2 5 1 Progression Explained.

Guitar scales you could use to solo over these chords include a D Locrian modal scale for the Dm7b5, and a C harmonic minor scale for the G7b9 (and the Cm chord). (See our main Guitar Scales page for patterns for these scales.)

Alternatively, you could use an altered scale over the altered dominant seventh chord (the G7b9)

We’ve looked at lots of guitar scales and covered a lot of ground in this lesson. Don’t worry if you feel that you’ll never learn all these jazz scales guitar diagrams and theory! Learn scales one by one, a shape at a time. You’ll soon find yourself getting confident using them all over the fingerboard.

The most important thing is to listen to and analyze solos by other jazz musicians – and not only guitarists. Learn what scales were used to play your favorite solos, and use and adapt other musicians’ licks in your own playing.

3 thoughts on “Jazz Scales Guitar: The Scales Used By Jazz Guitarists & How To Use Them”