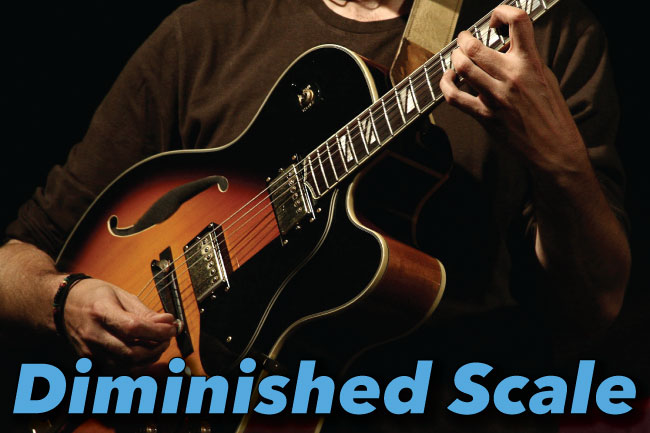 The diminished scale has a rather ambiguous sound when played without accompaniment. However, in the right circumstances diminished scales can liven up melodies and guitar solos.

Diminished scales are commonly used to improvise over diminished chords (from which they are formed), and are also used to create tensions over dominant chords.

Two common ways of playing diminished chords on the guitar are shown below:

In these diminished scale diagrams, any of the white circles can be considered to be the root / tonic note of the scale.

If you look closely at the spacing of the notes in a diminished scale, you’ll see why this occurs.

The notes rise in a continuous tone / semitone pattern throughout the octave.

Two more ways of playing diminished scales on the guitar are shown below:

We hope that you’ve enjoyed learning how to play this strange-sounding, but useful, scale on your guitar.

For a lesson on improvising with diminished scales, including example guitar solos and a backing track allowing  you to play your own solo, see this page: How To Use Diminished Scales.