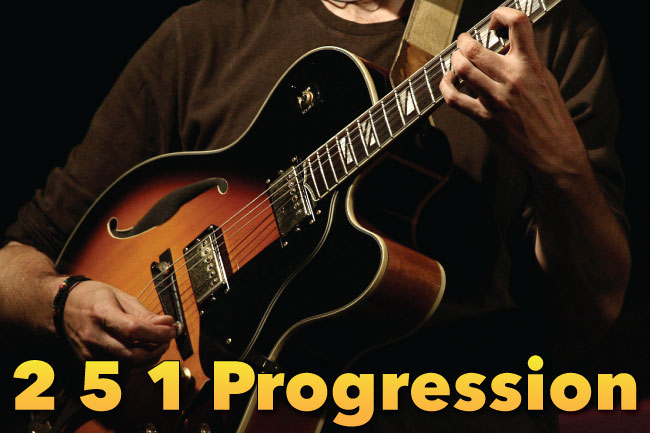 This lesson provides an introduction to the 2 5 1 progression.

Even if you don’t play jazz, the 2 5 1 is a very important sequence of chords.

This lesson explains what ‘2 5 1’ actually means, and provides example chord progressions so that you can play it for yourself.

If you want to play some 2 5 1 progressions, examples can be found at the end of this lesson. Be sure to come back and learn the theory, too!

Quick test: can you tell where the 2 5 1’s are in the progression below?

2 5 1 progressions lie at the heart of jazz music. They’re used either to reinforce the current key / tonal center, or to introduce a new key or tonal center  (see below for explanation of tonal centres).

What Are Tonal Centers?

As you explore 2 5 1’s, you’ll probably come across the term ‘tonal center’. Put simply, this is the key that you are in at a certain point in the music, rather than the original key of the piece.

Songs often change key (or modulate*) at least once. They will then (nearly always) return to the original key in order either to return to the start for a repeat or to end.

A 2 5 1 progression mid-way through a piece of music can introduce a new key, or tonal center.

* When a piece of music changes key, it is said to have ‘modulated’.

What Are Key Signatures?

The key signature is the cluster of sharps and flats at the beginning of every line of music, just after the clef. It shows the performer what key the music is in.

If there is an F sharp in the key signature, then all of the F notes in the score are sharpened, unless they are preceded by a natural or other accidental sign.

The illustration below shows the key signature for E flat major. This key has three flats.

Some keys (C and Am) don’t have any sharps or flats in their key signature. Some (G and Em, F and Dm,) only have one.

Key signatures can change during the course of the music. A change in the key signature usually represents a longer, or permanent, change of key rather than a brief change of tonal center.

The 2 5 1 Progression In More Detail

2 5 1 progressions can either be major or minor. In this lesson, I will concentrate on the major 2 5 1. I’ll cover minor progressions in another lesson!

As we’ve seen, the chords in any key are given numbers to identify them. The chords are formed from the notes of a scale. In this lesson we’re discussing chords in major keys, and are therefore using a major scale.

Although the 1 chord comes last in the 2 5 1 progression, I’ll explain it first, to introduce the chord numbering system.

The major 2 5 1 progression is based on chords made from the notes of a major scale. In the key of C major, the chords come from a C major scale.

The chord with the first note of the scale as its root note is the ‘1’ chord.

See this article for information about all of the chords in all of the major keys: Diatonic Chords.

The 1 chord is a major chord. In its basic form it also contains the 3rd and 5th notes of the scale. Additional notes can be added, but it will always have a major tonality: i.e. Major 7th, Major 6th, Major 6/9, etc.

The 1 chord in the 2 5 1 progression may not be the 1 chord of the key you were in previously: as soon as you hit the 2 5 1, you can consider yourself to be in the new key.

It is from the new key that the 2 5 and 1 chords of the progression take their names.

So that’s the 1 chord dealt with.

Here are some potential 1 chords from C major (as you’re hopefully beginning to see, it is rare in jazz for chords to be just major or minors: they are usually extended to become major 7ths, or minor 6ths, etc.).

The 2 chord – the chord that actually starts the 2 5 1 progression – is built from the second note in the major scale of the new key. (Note: this assumes that the 2 5 1 is introducing a new key, but it doesn’t always. For instance, it is often used in turnarounds to reinforce the current key.)

Chord 2 also contains the 4th and 6th notes of the new scale, and is a minor chord.

In jazz, the 2 and 5 chords are often extended to include the 7ths and/or other notes. It is also rare that the 1 chord is just simply a major triad without additional notes. Most often the 1 chord is extended to become a major 7th.

Here are some potential 2 chords in C major

With a 2 chord before the 5 chord, the effect is even stronger.

In jazz, dominant 7th chords are where the fun begins. Accompanists enjoy embellishing 7th chords with additional and altered notes. Soloists similarly play a wide range of notes and scales over 7th chords.

The hope is that, on the arrival of the 1 chord, everything will resolve itself and all of the preceding craziness will make some sort of sense!

Here are some potential 5 chords from a C major 2 5 1 progression.

Ok, you’ve gotten through the theory (well done!). Now it’s time to actually play some 2 5 1 progressions. The following examples are all in the key of C major. Once you can play them fluently, try transposing them into other keys.

The 2 and 5 chords usually last for the same amount of time: usually half a bar each, or a whole bar each. Sometimes they can flash by with just one beat each!

The progression shown below shows a typical usage of a 2 5 1. In fact there are two 2 5 1 progressions: the first marks a change of key to C major, and the second takes the music back into G major. The 2 5 1s are marked on the music.

I hope that you have enjoyed this introductory lesson to 2 5 1 progressions.

There has been a lot to take in, I hope that it all makes sense. Feel free to ask me any questions in the comments below: I’ll be happy to clarify anything you are unsure of.

If you want to learn more about chord theory, take a look at this lesson: Guitar Chord Theory. It contains masses of important information about what chords are and how they are named.

To learn more about key signatures and the chords in each key, take a look at this article: Diatonic Chords.

If you want to teach yourself jazz guitar, check out these recommended books: Best Jazz Guitar Books.

For more free guitar information, subscribe to Guitar Command. Stay one step ahead of your guitar playing friends! Click here for info.