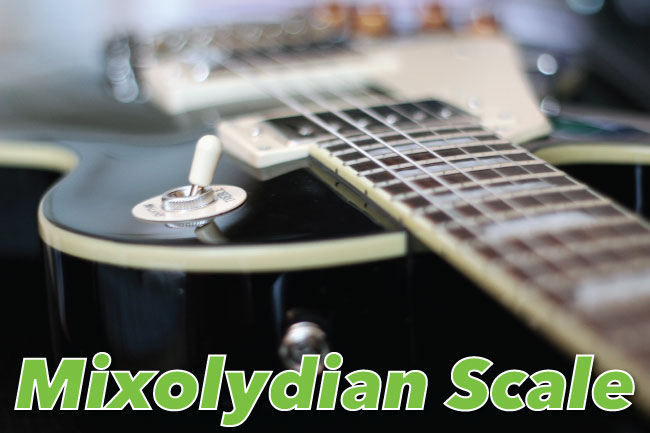 Hear the distinctive sound of the Mixolydian scale by playing the guitar tab, above. The tab shows a 2 octave mixolydian modal scale with a tonic note of C.

You can use the fretboard diagrams below to play the Mixolydian scale with any tonic note.

The Mixolydian modal scale is built on the fifth degree of a major scale (see below for details). Many folk melodies, particularly in Celtic music, are written with Mixolydian scales.

The Mixolydian scale is also used in jazz to improvise over dominant 7th chords.

In the diagrams below, the green circles show the tonic note of the scale. (The tonic note is the note that the scale is named after, e.g. the ‘C’ in C major.)

Notes In A Mixolydian Scale

Notes In A G Major Scale

Notice that only the F (the 7th note) is different.

The Mixolydian scale is a ‘modal’ scale. Modal scales are formed from other scales. Most of the time, the term ‘modal scales’ refers to scales formed from the major scale.

You can find out more about modal scales here: Guitar Modes.

The Mixolydian scale is formed by starting and finishing on the fifth degree of a major scale.

Once you have learned one or two of the above Mixolydian guitar scale shapes, learn how to use the scale in improvisation here: Improvisation With Mixolydian Scale, where you will be able to hear an example guitar solo, and also play your own solo over a backing track.

We hope that you have enjoyed learning about the Mixolydian scale. Try using this scale for yourself, either by writing Mixolydian melodies, or by using it in improvisation.