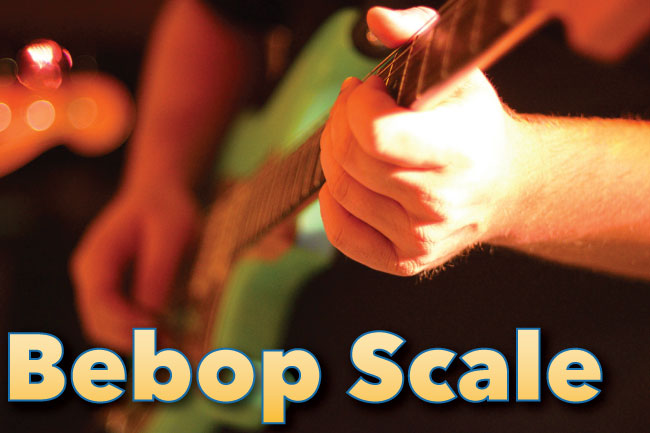 This page contains bebop scale guitar tab, fingerboard diagrams, notation and information. Using these you’ll be able to play all of the forms of this useful scale – all over the neck.

There are three main types of bebop scale: dominant, minor (Dorian), and major. We’ll cover all three on this page.

Bebop scales allow jazz improvisors to play fluent scale lines in which chord tones fall on the beat. They are not part of ‘strict’ musical theory – rather, they have evolved out of the kind of lines jazz musicians in the Bebop era – such as Charlie Parker – were playing.

Jazz musicians often add extra chromatic notes into scales in order to hit the desired chord tones or ‘target’ notes at the end of a phrase. Bebop scales are essentially just one way of doing this.

Bebop scales contain one more note than ‘standard’ major scales (or modes of major scales). If you play an ascending or descending bebop scale in eighth notes (quavers) against a 4:4 rhythm, and then play a major scale over the same rhythm, you will be able to hear how much smoother the bebop scale sounds.

The chromatic notes in the scale makes it sound much ‘jazzier’ than the standard major or Mixolydian scale.

Fretboard diagram 1 corresponds to the tab below, but also shows additional notes below and above the root notes. These notes can be used to extend the scale into other octaves.

Another way of playing this scale is shown below:

The dominant bebop scale can alternatively be thought of as a major scale with a minor seventh note added.

Minor bebop scales can be used to improvise over minor 7th chords, such as those found in 2 5 1 progressions.

There are two types of minor bebop scale. The first type (shown above) is the most common. It’s a Dorian scale with an added major third note (i.e. a G Dorian with an added B natural).

Either version of the minor bebop scale can be used to solo over minor chords.

Bebop scales can be used to create flowing lines over 2 5 1 progressions. Lines created with bebop scales can also be extended or combined with other scales or arpeggios.

You may have noticed that the G minor bebop scale (version 1) is essentially the same scale as the C dominant bebop scale. Both scales contain the same notes, they just start at different positions.

Therefore, you can play either the dominant bebop scale, or version I minor bebop scale over both the ii and V of a 2 5 1 progression.

Experiment with bebop scales by creating your own lines playing over single chord vamps and 2 5 1 progressions.

Practice starting lines on chord tones, and on non-chord tones, on and off the beat. Get a feel for how the scales flow, and play around with them – switch directions when playing the scales (i.e. play some ascending notes in a descending line), add extra chromatic notes, etc.

Remember that bebop scales aren’t strictly defined. Any ‘extra’ chromatic notes can be added to a standard scale in order to end a line on the desired note.

As you get acquainted with bebop scales you’ll begin to realise how much the timing and feel of licks and runs can be improved by the inclusion of the extra chromatic note – it’s one of the most commonly used techniques in jazz guitar playing.