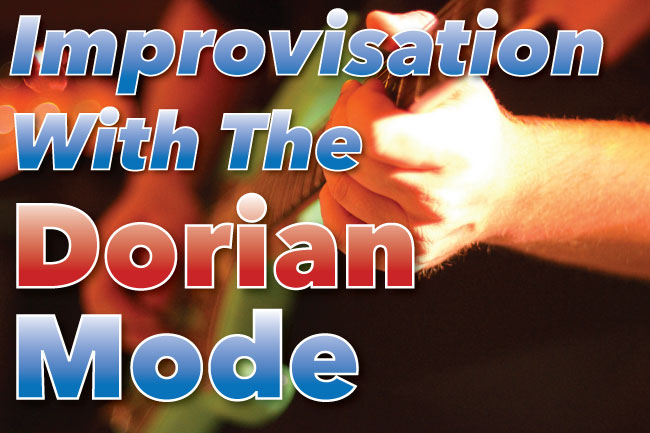 This is a guitar lesson on improvisation with the Dorian scale.

You’ll find one way of playing the Dorian scale further down the page, but jf you don’t know what the Dorian scale is, or if you want to know how to play it in other fretboard positions, you can find out here: Dorian Scale Guitar.

In this lesson you’ll hear an example of a guitar solo using the Dorian modal scale. There’s also a guitar backing track so you can practise your own Dorian guitar solo.

The Dorian modal scale is formed from a major scale. It uses the same notes, but starts and ends on the second degree of the major scale. To learn more about how modal scales are formed see the Guitar Modes page.

Many traditional folk melodies are written in the Dorian mode, and today it is commonly used in rock and jazz improvisation.

This is one of many ways of playing the D Dorian scale on guitar. The above scale is played in the fifth position.

You could just play the first eight notes up and down for a one-octave Dorian scale, but in the above diagram the scale above has been extended to include notes from the next octave.

Again, if you want to know more ways of playing the Dorian Mode on guitar see this page: Dorian Scale Guitar

Experiment with playing the one octave scale, then the extended scale to give you a feel for the sound of the Dorian modal scale.

The Dorian scale is often used to solo over minor seventh (m7) chords, particularly when they are the ‘ii’ chord in a sequence. (The ‘ii’, (or ‘2’) refers to the chord number and represents how the chord is being used in a particular sequence – if you’re not sure what this means, don’t worry: continue with this lesson and read up on diatonic chords later.)

Example Of A Guitar Solo That Uses The Dorian Scale

The example guitar solo is played over this chord sequence:

Now play along to the backing track and improvise your own guitar solo using the Dorian mode.

The notes of the Dorian scale will sound good being played over both the Dm7 and G7 chords.

Once you are getting some good phrases in one position, learn the scale in other positions and solo up and down the neck. You can also use a D blues scale for some variety.

Other Pages Of Interest:

3 thoughts on “Improvisation With The Dorian Scale”