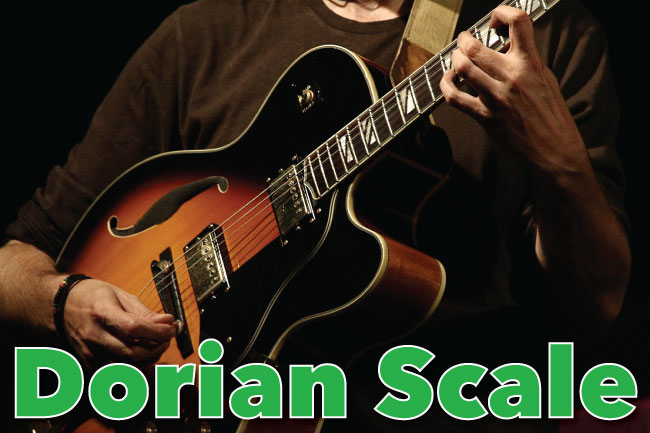 The above tab shows one way of playing a Dorian scale on guitar. It shows a 2 octave C Dorian scale starting at the 8th fret.

You can use the fretboard diagrams below to play the Dorian scale with any tonic note.

The green circles show the tonic note of the scale. (The tonic note is the note that the scale is named after, e.g. the ‘C’ in C major.)

What Is The Dorian Scale?

The Dorian Modal scale is a minor scale that is widely used in traditional folk music, and is now common in rock and jazz.

You can create some very beautiful melodies using the Dorian scale. Try improvising some for yourself, using the scale shapes in the diagrams above.

The Dorian scale is a ‘modal’ scale. Modal scales are formed from other scales. Most of the time, the term ‘modal scales’ refers to scales formed from the major scale.

You can find out more about modal scales here: Guitar Modes.

The Dorian scale is formed by starting and finishing on the second degree of a major scale.

Hear some Dorian mode guitar improvisation, and play your own solo against a backing track, here: Improvisation With The Dorian Scale.

The Dorian modal scale uses the same notes as those in a major scale, but it starts and ends on the second note of the major scale.

If you know a major scale shape on guitar, you can simply start on the second note, and end one note higher, and you’ll be playing a Dorian scale.

We hope that you have enjoyed learning about the Dorian scale. Try using this scale for yourself, either by writing Dorian melodies, or by using it in improvisation.