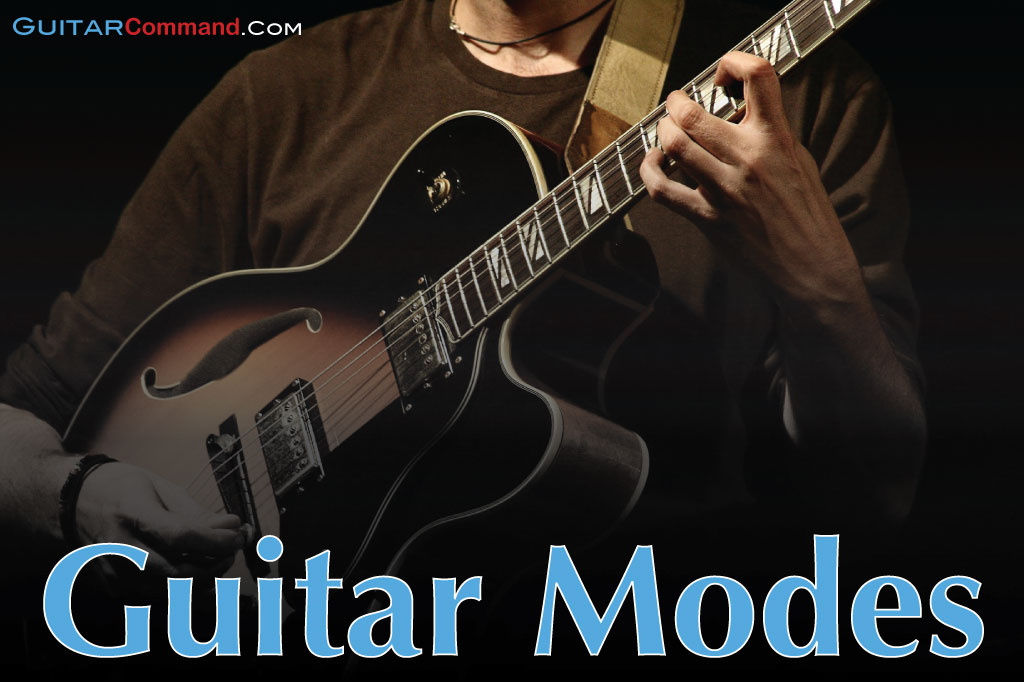 Welcome to our complete guide to guitar modes and modal playing. By the end of this page you’ll be able to incorporate modes into your own guitar solos and songs.

Modes are widely used in lead guitar improvisation. This page shows you how to construct and play modal scales on the guitar. Scale diagrams and tab are provided, so there’s no need for you to be able to read music in order to start experimenting with modes.

The first part of this lesson explains what modes are and how they’re created. If you just want to play the scales, go straight to the Guitar Modes Fretboard Diagrams & Tab section.

Otherwise, read on for a complete guide to modes and modal playing.

Modes are scales that are derived from other scales.

Most of the time when you hear people talking about modes they’ll be referring to scales that are derived from the notes of a major scale.

These are the modes that we’ll be discussing throughout this page.

There are seven modes of the major scale. Each has its own distinctive sound, and each can therefore bring a different flavor to a solo or melody.

Each of the seven modes is formed using the notes of a major scale. The notes are played in the same order as the major scale, but each mode starts on a different note.

The Dorian modal scale is derived from the major scale one tone lower than its tonic note. Therefore a D Dorian scale will use the notes of a C major scale (Because D is a tone above C).

D Dorian scale contains the following notes: D, E, F, G, A, B, C, D. Notice that these are the same notes as a C major scale, but starting and ending a step higher.

Modes are much easier to understand visually. The ‘Modes Of a C Major Scale’ diagram, below, will help you to get your head around the concept (it’s not as complicated as it sounds!).

How Modal Scales Are Built From The Major Scale

Remember: although any scale can have modes, the terms ‘modes’ and ‘modal scales’ usually refer to the modes of the major scale.

The diagram below shows the modes of a C major scale. Below the scale you’ll see how modal scales are created using the same notes, but with different start (and end) points.

The fretboard diagram below shows you one way of playing a 2 octave major scale. The green circles show the root notes of the scale.

Using the notes from the major scale diagram shown above, you can construct modal scales:

Below you’ll find diagrams of the shapes used to play all of the modes.

Below are all of the modes of a major scale. They are shown in diagram form and as tab with a root note of C.

When you are playing the different modes, try to distinguish the individual sound of each scale. Each mode should be thought of not as a part of a major scale, but as a new scale in its own right – with its own sound and uses in improvisation.

The Ionian modal scale is the same as a standard major scale.

In order to play a C Ionian scale, play the pattern shown above with the green notes positioned over C notes on the fretboard (i.e. so the green note on the 6th (low E) string is played at the 8th fret). This is shown as tab below.

The Dorian mode has a minor sound. It is often used in folk melodies. In jazz it’s used to improvise over the ‘2’ chords in 2 5 1 progressions.

You can find out more about the Dorian scale here: Dorian Scale Guitar.

The Phrygian modal scale has a minor tonality and a ‘Spanish’ sound. It is often used by metal guitarists (see our Metal Guitar Scales page), and also in Spanish music.

The Lydian modal scale is the same as a major scale, but with a sharpened 4th note, giving it a slightly ‘mysterious’ sound. It can be used by jazz guitarists to solo over major chords. 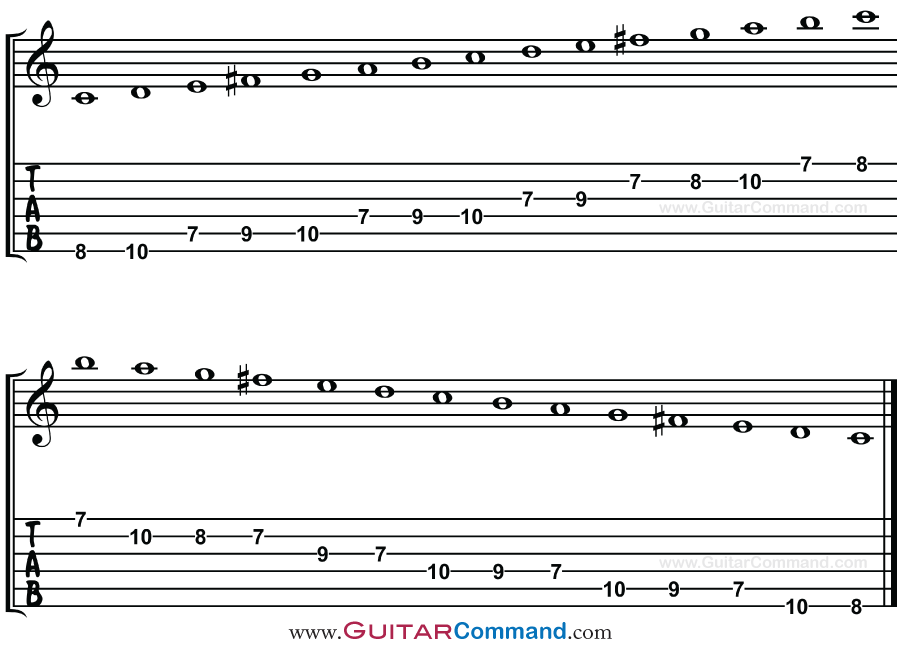 The mixolydian modal scale can be used to solo over dominant fifth chords. It is another mode that is often used in folk melodies.

The Aeolian modal scale is often used to improvise over minor chord sequences. It is also known as the ‘natural minor’ scale.

The Locrian mode, when played without accompaniment, sounds rather ambiguous. It is often used to solo over minor 7th flat 5 chords in minor 2 5 1 progressions.

How To Learn & Use Guitar Modes

Play each of the scales shown above a few times, and learn how they sound. You should eventually get to know each modal scale as a scale in its own right, rather than just as a major scale with a different starting note.

Try inventing some melodies using the Dorian and Mixolydian modal scales. You may notice that these scales have a ‘folky’ sound. Many folk melodies are in the Dorian mode (What Shall We Do With The Drunken Sailor, Scarborough Fair, etc.) and the Mixolydian mode is widely used in Celtic music.

Modes In Jazz And Other Modern Music Styles

Modes are widely used in modern music, particularly in improvisation. The term ‘Modal Jazz’ is used to describe a whole genre of modal-based music. One famous example of modal jazz is Miles Davis’ ‘Kind Of Blue‘ album. Modes are also used in fusion and rock music.

Dorian scales can be used to improvise over ii7 chords (e.g. Dm7 in a C major song).

Mixolydian scales can be used to solo over Dominant chords (e.g. B9 in a song in E Major)

Locrian scales can be used to improvise over ii flat5 chords (e.g. Bmb5 in a song in C minor).

There are many ways of utilizing modes in your guitar playing. We hope that after reading this article you understand what guitar modes are, and are excited to try them out in your own music.

• Our downloadable Guitar Scales Chart Book features shapes for playing guitar modes in all positions on the fingerboard.

10 thoughts on “Guitar Modes Tab & Fretboard Diagrams: Complete Lesson – Learn How To Use Modes In Your Solos”