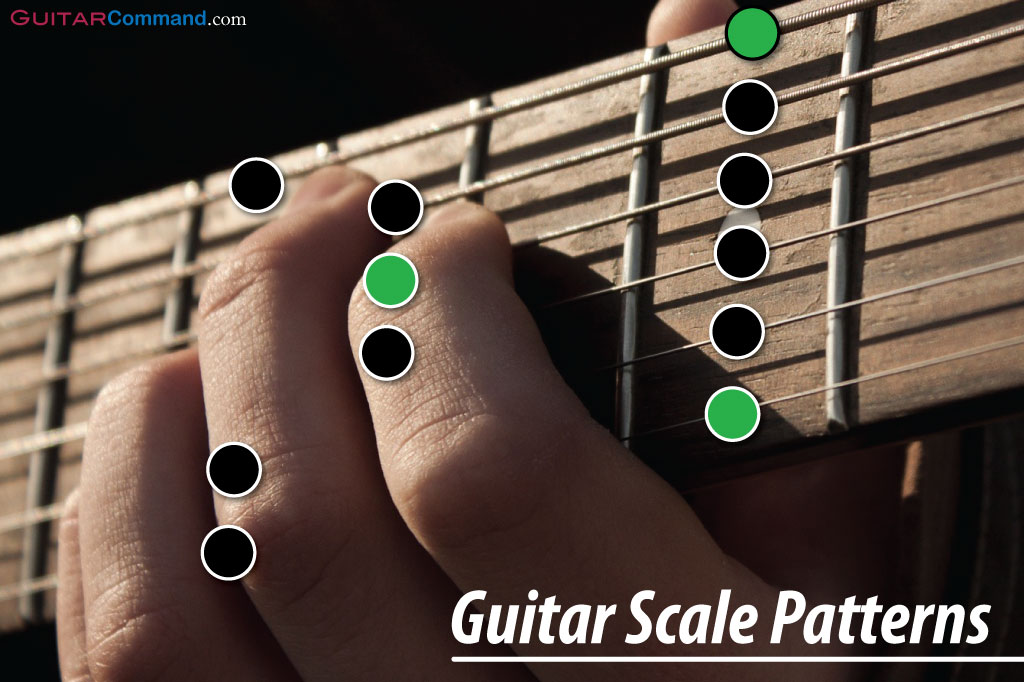 What Is A Guitar Scale Pattern?

A guitar scale pattern is a simple visual representation of the guitar fretboard. It shows where the fingers of the guitarist’s fretting hand should be placed in order to play a certain scale.

A scale is a linear sequence of notes that starts on a tonic note and ends on the same note one or more octaves higher than the start note. Scales are often played ascending then descending in one phrase without repeating the uppermost tonic note.

The pattern above includes a fret number. This tells you at which fret you should position your hand in order to play a specific scale (in this case an F pentatonic minor).

Not all scale patterns provide a fret number. For those that don’t you’ll have to rely on your knowledge of the fretboard to play the scale at the correct position. See Fret Numbers, below, for more information.

Guitarists tend to learn scales as patterns because the same pattern can be moved to different positions of the fretboard in order to play the same scale in a different key.

See the Movable / Transposable Guitar Scale Patterns section of this page for an explanation of this concept.

Parts Of A Guitar Scale Pattern

Below is a G pentatonic minor scale pattern.

In a guitar scale pattern, the notes of the scale are represented by circles, the frets by horizontal lines and the strings by vertical lines.

In a guitar scale pattern for a standard 6 string guitar, the strings represented by the vertical lines are, from left to right:

The tonic notes of the scale (i.e. the C notes in a C major scale, A notes in an A harmonic minor scale, etc.) are often shown in a different color, or are otherwise different from the other notes in the scale. This is not always the case if a fret number has been included.

In the scale patterns on this page the tonic notes are green.

How To Use Guitar Scale Patterns

Find the pattern of the scale you want to play. In this case we’re going to play a G major scale.

The pattern below doesn’t have a fret number (not all do), so we’ll have to work out where to play it using our knowledge of the guitar fretboard. (You can find a useful chart here: Guitar Strings Notes.)

Find the lowest tonic note of the scale pattern. In the pattern above this is the green note on the 6th (the bottom E) string.

(We ignore the black notes outside of the scale. To find out why see the ‘Why Are There Additional Notes In Guitar Scale Patterns?‘ section below.)

On your guitar’s fretboard, locate a G note on the same string as the lowest tonic note on the diagram.

In this case it is the G note at the 3rd fret of the 6th string.

In order to play the above scale, we’ll use the middle finger, because by doing so we’ll be able to play all of the notes of the scale without changing our hand position.

Play the next note as indicated on the scale pattern. In this case it is the A note at the 5th fret of the 6th string.

Continue this process until you have reached and played the next tonic note.

If the scale pattern contains only two tonic notes, play the notes you’ve just played in the reverse order until you get back to the original tonic note. You’ll have played a 1-octave scale ascending and descending.

Scale patterns representing guitar scales that should be played in the first 3 or 4 frets may include the guitar nut. This is usually shown as a thicker fret line at the top of the diagram.

(The guitar nut is the narrow grooved ridge that holds the strings in place between the fretboard and the headstock.)

If a scale pattern represents a specific scale – i.e. C major scale rather than a general major scale, then a fret number will be included. This tells the guitarist at which fretboard position the scale should be played.

Many guitar scale patterns don’t have fret numbers, so you’ll have to know where the notes are on the guitar fretboard in order to play the scale in the correct position.

Why Are There Additional Notes In Guitar Scale Patterns?

Why Is There More Than One Scale Pattern For Each Scale?

If you only know one pattern for a scale then you’re limited as to where on the fretboard you can play that scale.

This is the reason why guitarists often learn multiple patterns for the same scale. It allows them to play the same scale in multiple fretboard positions and also to join up patterns to extend the scale beyond the range of a single pattern. 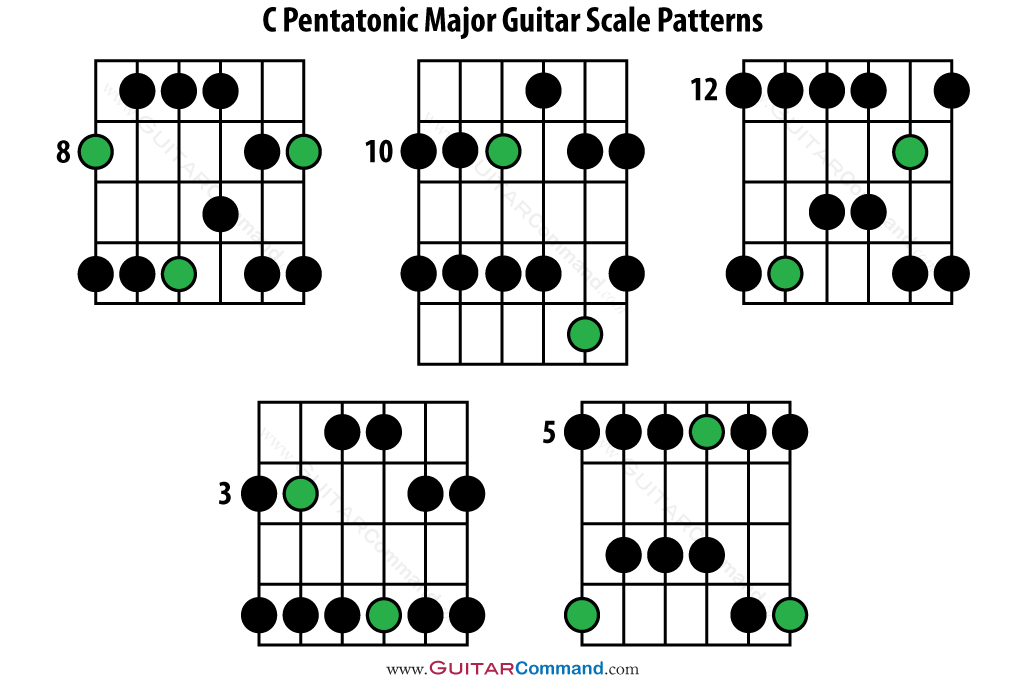 You could also join several patterns together and move between different positions on the guitar neck.

This would come in handy if you wanted to play a guitar solo using the C major pentatonic scale; knowing multiple patterns would allow you to take your solo beyond the notes of just one pattern. You could join 2 or more patterns and use much more of the fretboard.

Herein lies the real strength of guitar scale patterns: a single pattern can be moved up and down the fretboard in order to play the same scale (e.g. major scale) with any tonic note (e.g. C major scale, D major scale, Bb major scale, etc.).

For example, the same scale pattern used to play a G major scale starting at the third fret could be moved 2 frets higher up the fretboard (i.e. up to the 5th fret) in order to play an A major scale.

This is demonstrated below: 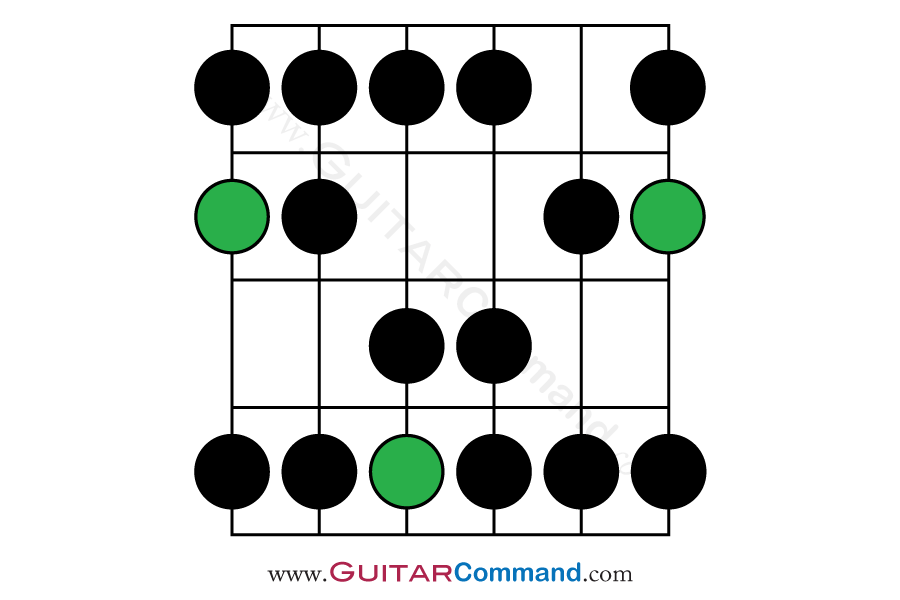 … can be used to play a G major scale starting at the 3rd fret of the 6th string:

… and an A major scale starting at the 5th fret of the 6th string (and any other major scale):

Being able to play at the correct fretboard position requires knowledge of where the notes are on a fretboard.

Below is a selection of common and exotic guitar scales for use in your own playing.

This is probably the most commonly-used guitar scale pattern. It is used in many musical genres, including rock, blues, metal, jazz and pop.

This variation on the pentatonic minor pattern includes an additional note: the ‘flat 5’, or ‘blues note’. Its presence gives the scale a bluesy sound.

This is the major equivalent of the pentatonic minor scale. You can use in in songs in a major key.

This is the ‘standard’ musical scale.

This scale has a minor tonality, and can be used to play over songs in minor keys. It is also known as the Aeolian modal scale.

There are several ‘minor’ scales, each with their own unique sound. You could try using a harmonic minor scale to improvise over a minor key sequence; it has a sound reminiscent of ‘classical music’.

The Dorian modal scale is a minor scale which is popular in both folk and jazz music. The melody in ‘Scarborough Fair’ uses a Dorian scale. Many jazz musicians use the Dorian scale in their improvisations.

The minor 7th note in a Mixolydian scale’s minor makes it sound good when improvising over 7th chords. The scale is also used in folk melodies.

This scale has a Spanish / Middle Eastern sound. Use it to give your solos an exotic twist!

This scale is unmistakably Japanese in origin. It’s rarely heard in rock and pop music, and could make your solos stand out from the crowd!

If you have any questions relating to scale patterns and their use, feel free to ask them in the comments below: we’ll be happy to help!

Find out more at Guitar Command:

1 thought on “Guitar Scale Patterns: What They Are & How To Use Them, PLUS A Selection Of Useful Patterns”