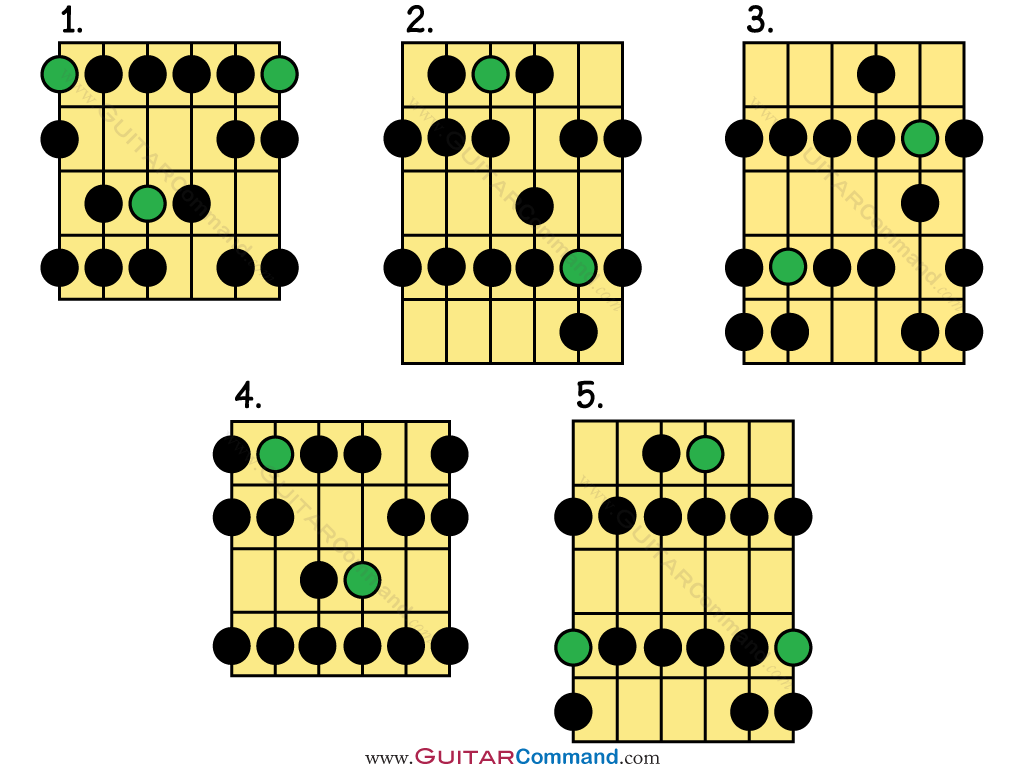 About The Phrygian Scale

The Phrygian modal scale uses the same notes as that of a standard major scale, but starts and ends on the third note of the scale. This is explained in the examples below:

The third note of a Phrygian scale is a minor 3rd from the tonic note, giving the scale a minor tonality.

The Phrygian modal scale has a subtle ‘Spanish’ sound, and can be used over Spanish / Latin chord progressions. Its effect is less marked than that of the other scales in our Spanish Guitar Scales page.

The Phrygian scale can also be used to provide a subtly ‘exotic’ sound in metal / rock solos.

If you have any questions about anything covered on this page then feel free to ask them in the comments section below; we’ll be happy to help!

Get to know the sound of the Phrygian scale by playing the pattern below. Further down the page you’ll find four additional Phrygian patterns and tabs. 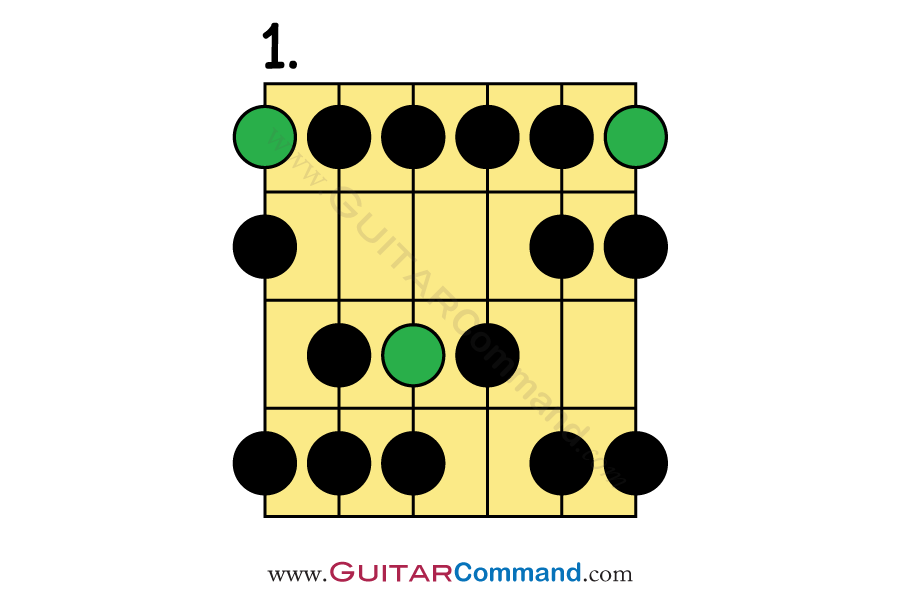 Play it at the 8th fret for a 2-octave C Phrygian scale, as shown in the TAB below. (At the 8th fret the green tonic notes as shown on the diagram will be positioned over ‘C’ notes on the fretboard.) 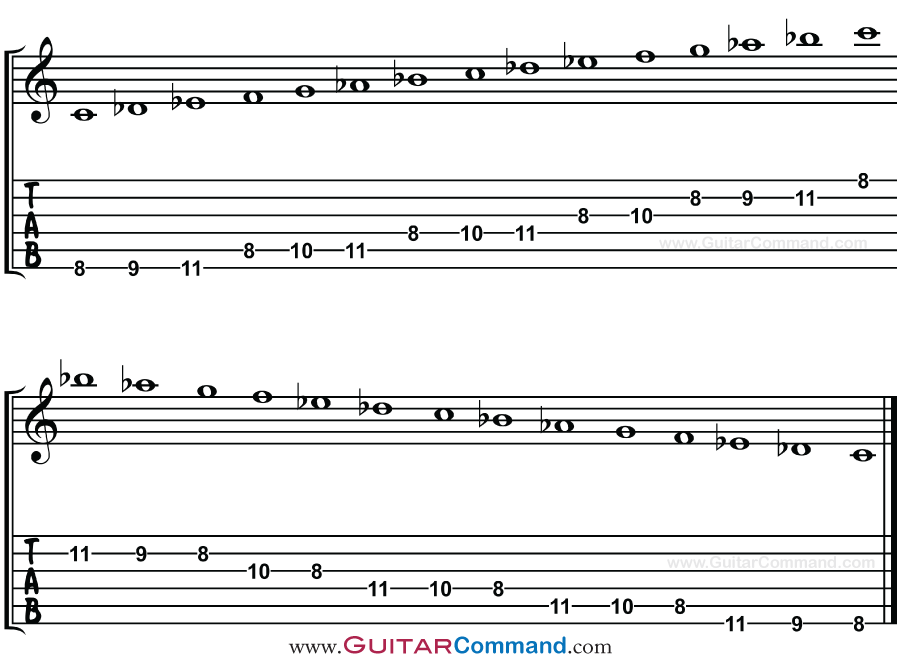 You may have noticed that the scale pattern above includes 2 additional notes that extend the scale beyond the second octave.

Scale diagrams often include notes that are either above or below the tonic notes in this way. This is because you’ll usually be using the scale while improvising, so knowing which extra notes are available in that fretboard position can be useful.

If you just want to play the scale then start and stop on the green tonic notes. 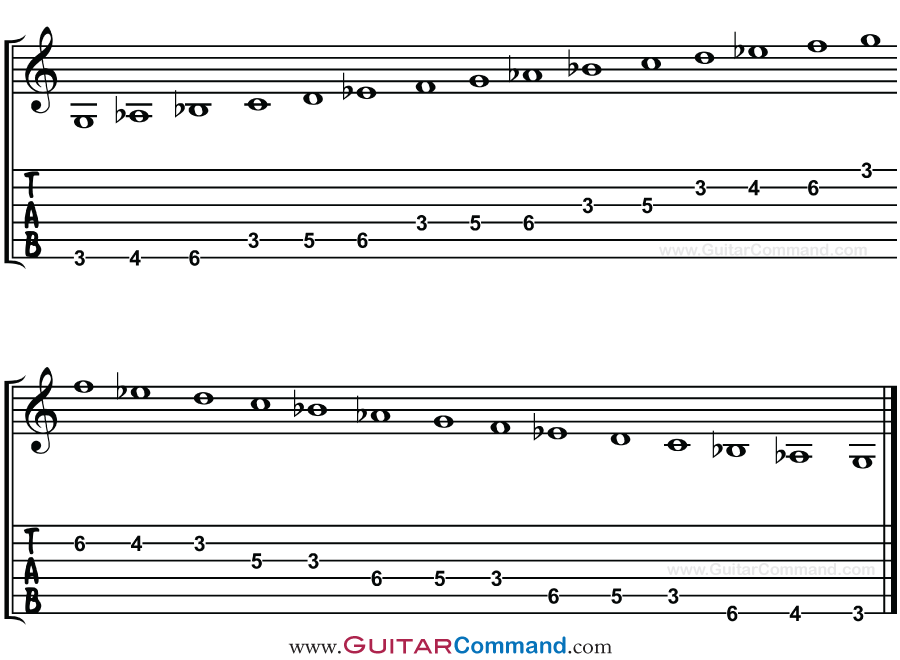 The diagram below shows the first Phrygian scale pattern together with four more patterns. We’ll take a closer look at each of the new patterns below.

The basic Phrygian scale pattern (pattern 1) can be extended up and down the guitar fretboard using the additional scale patterns. You’ll see how to join the patterns up in order to create longer lines further down the page.

A tab example has been provided for each of the new patterns. The tab shows how the pattern can be used to play either a 1 octave or a 2 octave C Phrygian scale. (Patterns 1 & 5 span 2 octaves, the others a single octave.) 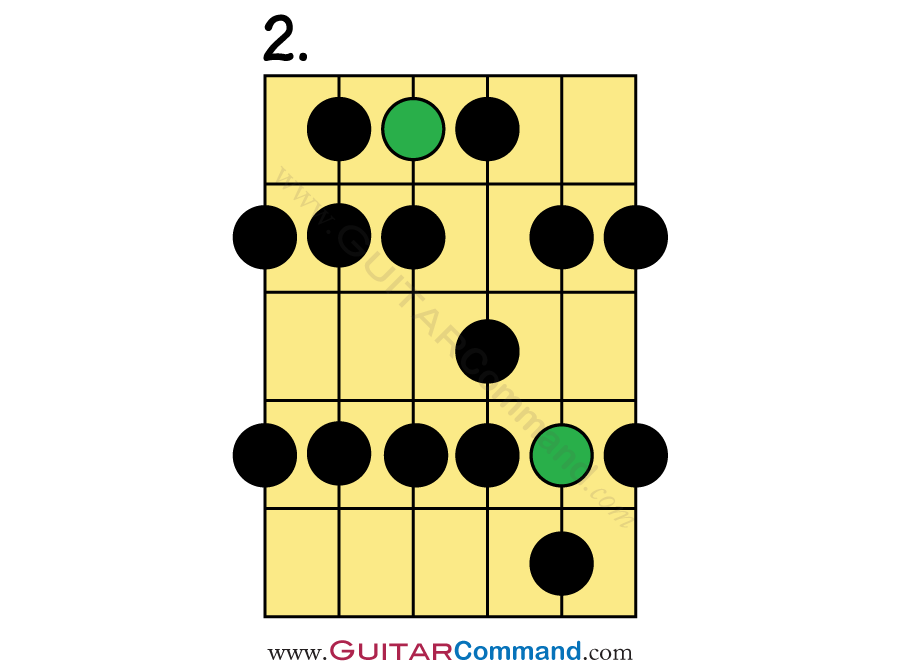 Play this pattern in 10th position (i.e. position your hand so that the index finger is ready to play at the 10th fret), starting and stopping on the green notes, for a 1-octave C Phrygian scale: 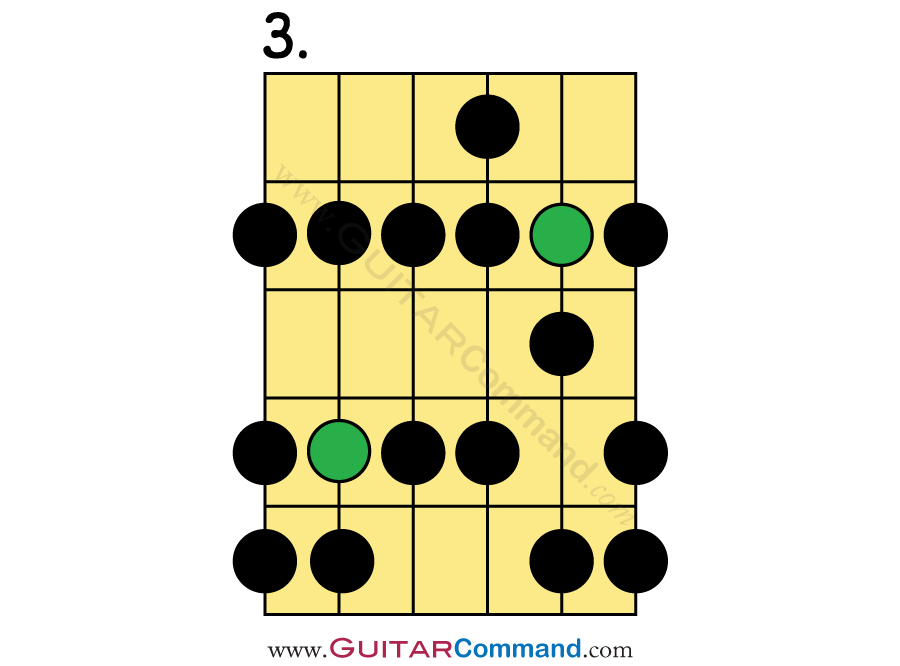 The TAB below shows how pattern 3 can be used to play a 1-octave C Phrygian scale in open position. (You could play the same scale an octave higher by using the pattern starting on the C at the 15th fret of the 5th string.) 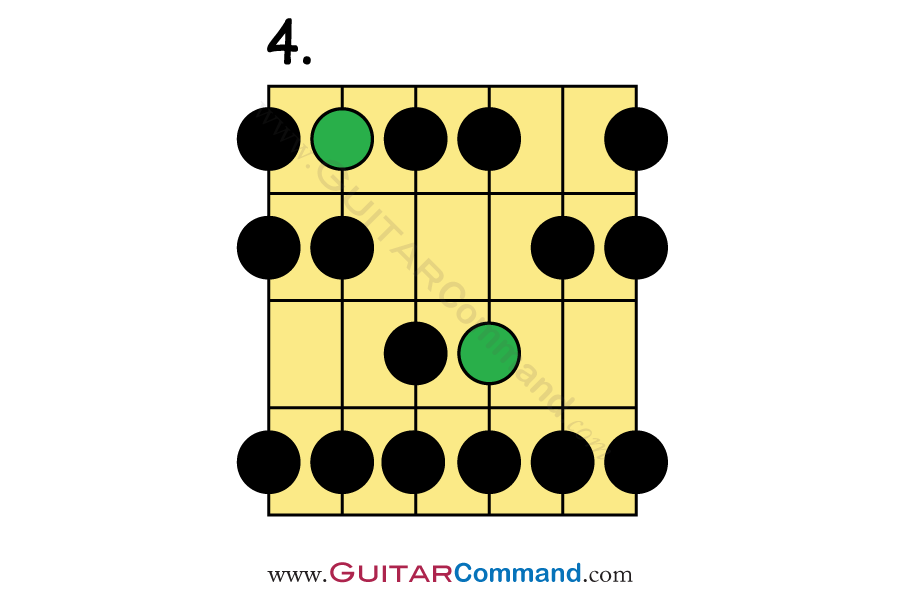 Play this pattern at the 3rd fret for a C Phrygian scale, as shown in the TAB below: 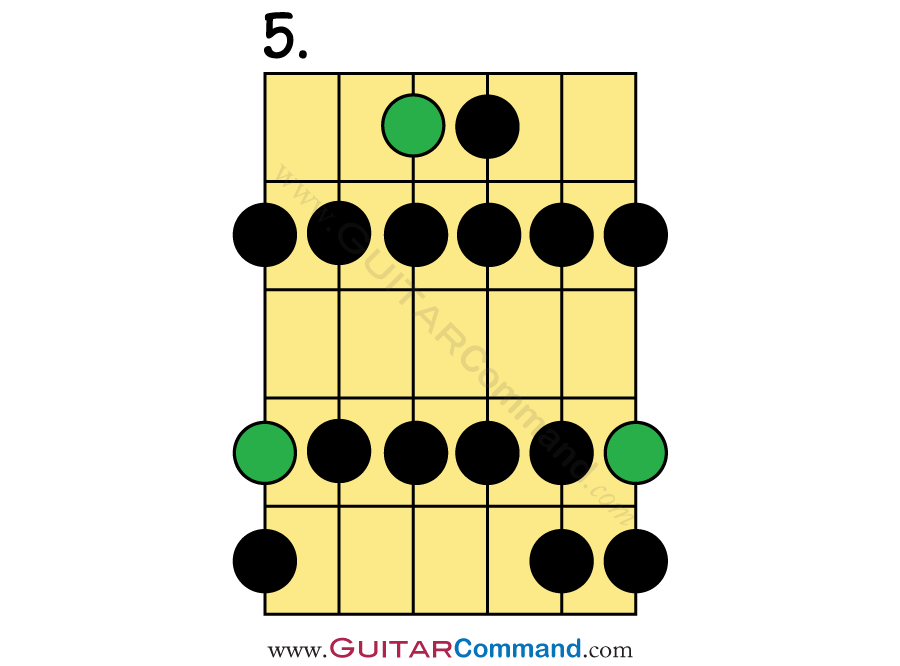 Playing this pattern in 5th position will result in a C Phrygian scale, as shown in the TAB below: 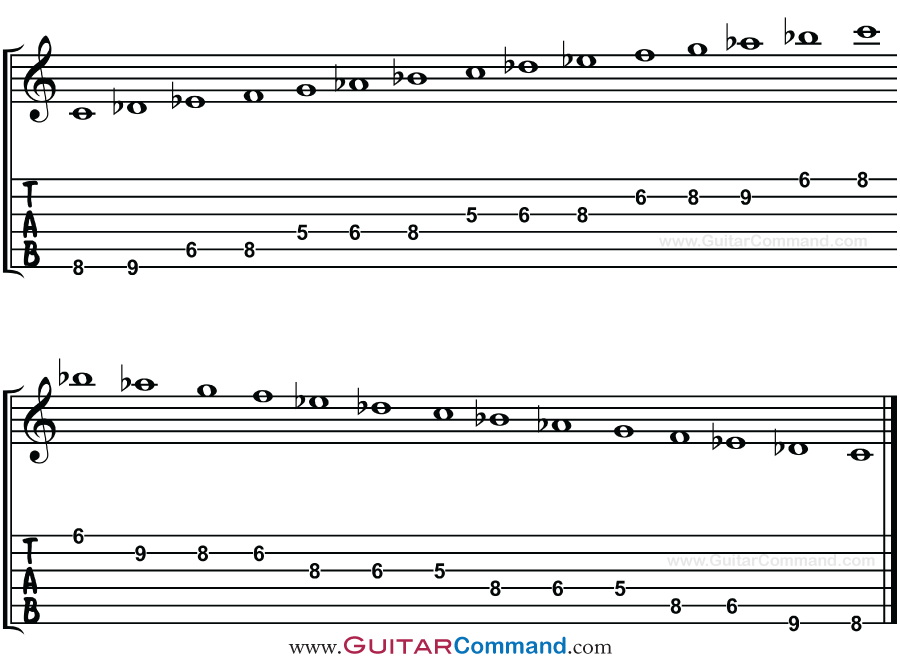 For example, if you only knew the basic Phrygian scale pattern (pattern 1) and were improvising over a chord progression in C, then you’d be limited to playing in 8th position (i.e. with your index finger positioned over the 8th fret.)

If you also knew Phrygian scale pattern no. 3, then you could also improvise using a C Phrygian scale in open position, or in 12th / 13th position (the pattern requires changing position). This would give you access to several more notes. 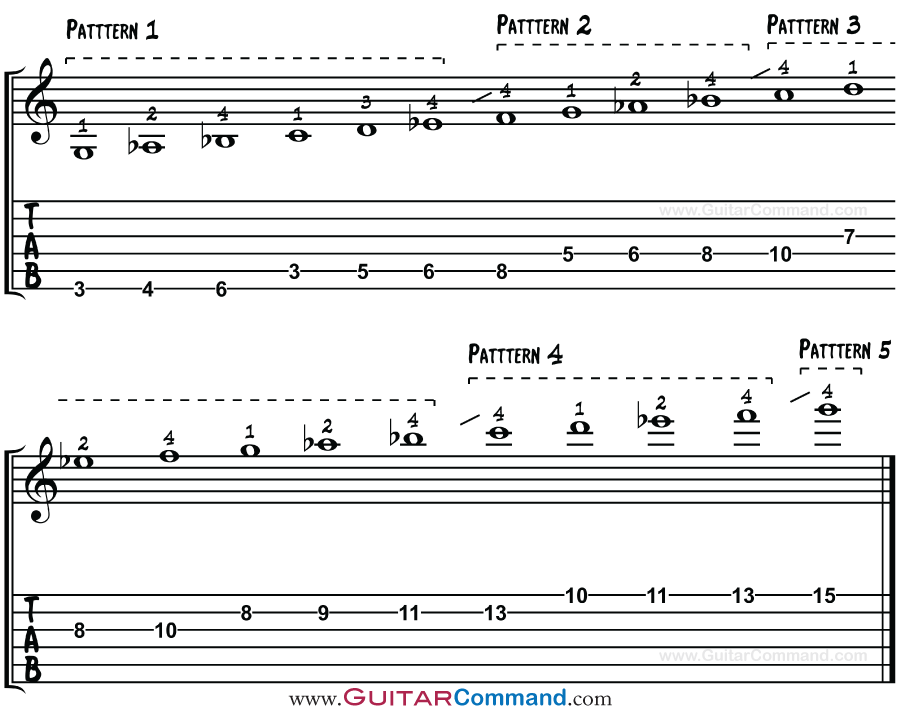 This is just one of many ways you can join Phrygian scale patterns up to make longer lines.

Notes In The Phrygian Scale

Therefore, the notes in a C Phrygian scale are:

… and the notes in G Phrygian scale are:

How To Use Phrygian Scales

The Phrygian scale has a minor tonality and can be used to improvise over minor chord sequences.

Because of this, the Phrygian scale can be used to solo over chord progressions than contain chords that are diatonic to the major scale a major third lower .

For example, you could use the E Phrygian scale to solo over the following chord progression, because all of the chords are diatonic to C major.

The Phrygian scale has a Spanish sound, and can be used over Spanish-influenced chord progessions, such as the one below. A solo using the E Phrygian scale sounds good over the E major chords in the progression despite the scale’s minor tonality.

The scale can also be used in metal / rock, and can bring a Spanish / exotic sound to your solos. Try using a G Phrygian modal scale over the chord progression below:

2 thoughts on “Phrygian Scale Guitar: The Ultimate Guide – Learn How To Play The Phrygian Mode On Your Guitar”