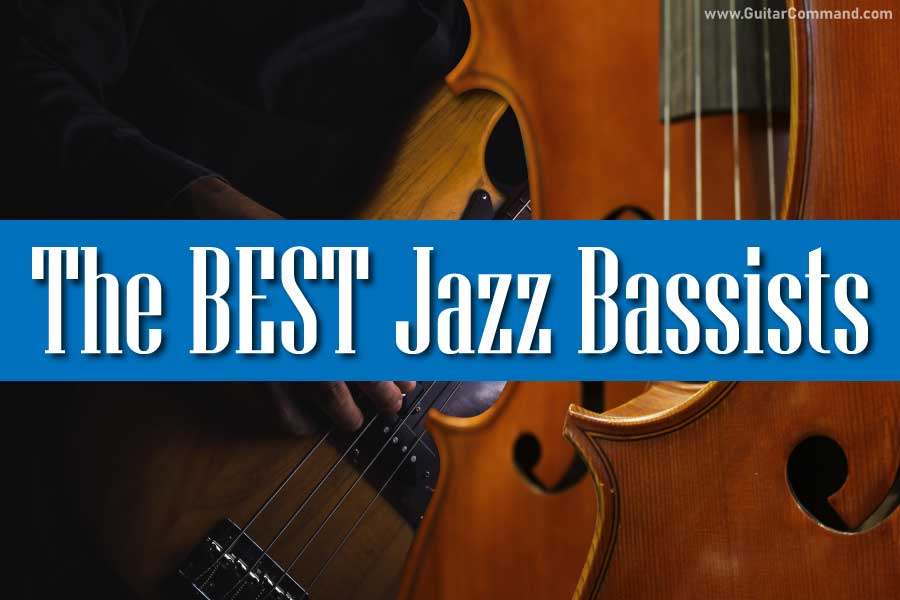 Who were the best jazz bassists? On this page we take a look at the lives and work of some of the greatest bassists in jazz history…

The bass–in both its acoustic and electric form–provides the foundation of a jazz ensemble’s sound. Although often overlooked, jazz bassists have played a major part in creating and shaping some of the most powerful and interesting music in history.

Capable of supplying rhythmic, melodic, and harmonic elements, the bass provides the link between the rhythm section and the other members of a jazz ensemble.

On this page you’ll discover some of the players responsible for developing the bass’s role in jazz music. We’ve also provided details of notable jazz bass albums, so you can check out their playing for yourself…

The Greatest Jazz Bassists Of All Time

No list of the best jazz bassists would be complete without Charles Mingus. The American pioneer is one of the most respected bassists and composers in jazz history. His free-flowing compositions bring together elements of swing, blues and collective improvisation, blending them with a fierce, energetic style.

Mingus is primarily known for his big band compositions and recordings, but his small ensemble works are equally as powerful and worthy of attention.

Paul Chambers was a prolific bassist whose career was brought to an early end by tuberculosis (which may have been brought on by alcohol and heroin addiction).

Originally from Detroit, Michigan, Chambers grew up playing multiple instruments, eventually dedicating most of his time and energy to the double bass. He moved to New York City in 1954 and joined up with legendary trumpeter Miles Davis in 1955.

Chambers’s virtuosic soloing made heavy use of the bow and his time feel was extraordinary.

After his time with the Miles Davis Quintet, Chambers went on the work consistently in a trio setting with fellow Davis alumni pianist Wynton Kelly and drummer Jimmy Cobb.

Stanley Clarke is an American fusion / jazz bassist who was instrumental in raising the profile of the electric bass guitar in jazz.

Clarke, who was born in 1951, is perhaps best known for his work with his long-term collaborator, keyboardist Chick Corea. Along with Corea, Clarke is the only permanent member of the jazz fusion band, Return To Forever.

In addition to his work with Corea, Clarke produced many recordings under his own name, and was leader of the Stanley Clarke Band.

School Days, released in 1976, is the “classic” Stanley Clarke album. The title track features one of Clarke’s best-known bass riffs.

Return To Forever’s Romantic Warrior is considered one of the best jazz fusion albums of all time, and is the ensemble’s best-selling album. As well as Corea and Clarke, the album also features Al Di Meola on guitar and Lenny White on drums.

American jazz double bassist Ron Carter is one of many distinguished jazz musicians who first rose to fame as a member of the Miles Davis Quintet. Carter has performed on over 2,000 recording sessions, and is the world’s most recorded jazz bassist. He is also an acclaimed cellist.

Before joining the Miles Davies Quintet, Carter played with many notable jazz musicians, including Cannonball Adderley, Thelonious Monk and Eric Dolphy. In the course of his career, Carter has released numerous recordings under his own name, and has collaborated with many jazz notables, including Chet Baker, George Benson, Herbie Hancock, Astrud Gilberto, Quincy Jones and Kenny Burrell.

Either Pastels and Piccolo, recorded in 1976 and 1977 respectively, would serve as excellent introductions to Carter’s playing and compositional skills, and are regarded by many as being the bassist’s finest recordings.

Oscar Pettiford is one of the most recorded bassists of his era. Growing up in a musical family in Oklahoma, Pettiford made his professional debut in 1942 and recorded with the famous tenor saxophonist Coleman Hawkins in 1943.

Shortly after, Pettiford moved to New York City where he became part of the group of musicians that jammed after-hours at a club called Minton’s Playhouse. This group, which included such legends as Thelonius Monk, Dizzy Gillespie, and Charlie Parker, is generally regarded as the birthplace of the bebop idiom.

Pettiford continued to both record and perform extensively as both sideman and leader, eventually moving to Denmark where he died at the age of 37 from an polio-related illness.

One of the most important double bassists in the history of jazz music, Reggie Workman has performed and recorded with some of the most iconic musicians in jazz history.

Originally from Philadelphia, Pennsylvania, Workman rose to prominence as the bassist in John Coltrane’s quartet in 1961 and was featured on Coltrane’s legendary Live at the Village Vanguard recording.

Workman continued to work through the 1970’s, 80’s and 90’s in a number of different bands. He is still performing today and is a professor at the New School for Jazz and Contemporary Music in New York City.

Charlie Haden made his professional debut at a young age, performing with his family’s band on the radio in their hometown of Shenandoah, Iowa.

Haden developed an interest in the double bass as a young teenager and moved to Los Angeles when he was 20 in 1957 to pursue a career in music. While in Los Angeles, he worked with several important musicians, including the free-jazz pioneer saxophonist Ornette Coleman.

Haden recorded on Coleman’s iconic 1959 quarter release The Shape of Jazz to Come and moved with the band to New York City that same year for the band’s now legendary six-week residency at the Five Spot Cafe.

That residency helped spark a new creative movement in jazz towards the avant-garde. Haden continued to work with some of the most influential musicians of the 20th century including drummer Paul Motian, pianist Keith Jarrett, and guitarist Pat Metheny.

Haden has won multiple Grammy awards and founded the Department of Jazz Studies at the California Institute for the Arts.

Derrick Hodge is one of the most successful bassists and composers of the last two decades. He has received five Grammy awards for a wide range of work in composition and performance, most notably his work on Robert Glasper’s 2013 and 2014 releases Black Radio and Black Radio 2.

Hodge has been an active composer for film and TV including important collaborations with director Spike Lee. The bassist signed with Blue Note records in 2011 and has since released three records on the label as a leader.

Scott Lafaro was an innovative and virtuosic bassist who made an indelible impact on the jazz bass tradition in a tragically short-lived career.

It was not until Lafaro returned to the East Coast and began working in New York with pianist Bill Evans and drummer Paul Motian that his style blossomed. In that trio, Lafaro was given the freedom to expand the role of the double bass into an instrument that shared an equal melodic footing with Evans’ piano.

Instead of the traditional role of a jazz bassist, Lafaro pioneered a more upfront style that complimented and intertwined with Evans’ improvised lines. This new direction profoundly affected the role of the bass in jazz music.

Tragically, Lafaro’s career was cut short by his death in a car accident when he was only 25 years old.

Another mainstay of all “greatest jazz bassist of all time” lists is Jaco Pastorius. Widely regarded as one of the preeminent electric bassists, Pastorius was a wild and iconoclastic character who raised the profile of the instrument in jazz for all time.

Originally from South Florida, Pastorius became a bass instructor at the University of Miami in the early 1970’s. Here he met guitarist Pat Metheny, who was also on the faculty at the time. The two would go on to record Metheny’s acclaimed debut L.P., Bright Size Life.

Pastorius would eventually be signed to Warner Bros. records and tour the world with his Word of Mouth big band.

Pastorius is known for his eccentric performance style and his use of a fretless Fender Jazz bass. (Rumour has it he removed the frets himself with a butter knife and filled in the holes with epoxy.)

Pastorius’s fluid, virtuosic ability combined with his innovative use of harmonics and bass guitar chords has influenced generations of bassists.

One of the most influential bassists in jazz history, Ray Brown is best known for his work with the Oscar Peterson Trio and with Ella Fitzgerald.

Originally from Pittsburgh, Pennsylvania, Brown began on the piano at a young age and made the switch to double bass after he learned of an opening in his high school’s jazz ensemble. He moved to New York City when he was 20 years old in 1946. Here he began to work with some of the most prominent musicians of the era, including pianist Hank Jones, trumpeter Dizzy Gillespie, and vibraphonist Milt Jackson.

In 1951, Brown joined Oscar Peterson’s trio with drummer Ed Thigpen. The trio recorded and performed extensively for about 15 years.

This list of the best jazz bassists was compiled as a quick guide to jazz bass; it is by no means definitive and is in no particular order. If your favorite jazz bassist or album hasn’t been included, let us know in the comments section below; we’d love to hear your thoughts and comments!

How To Get A Jazz Guitar Sound

Is A Bass A Guitar?