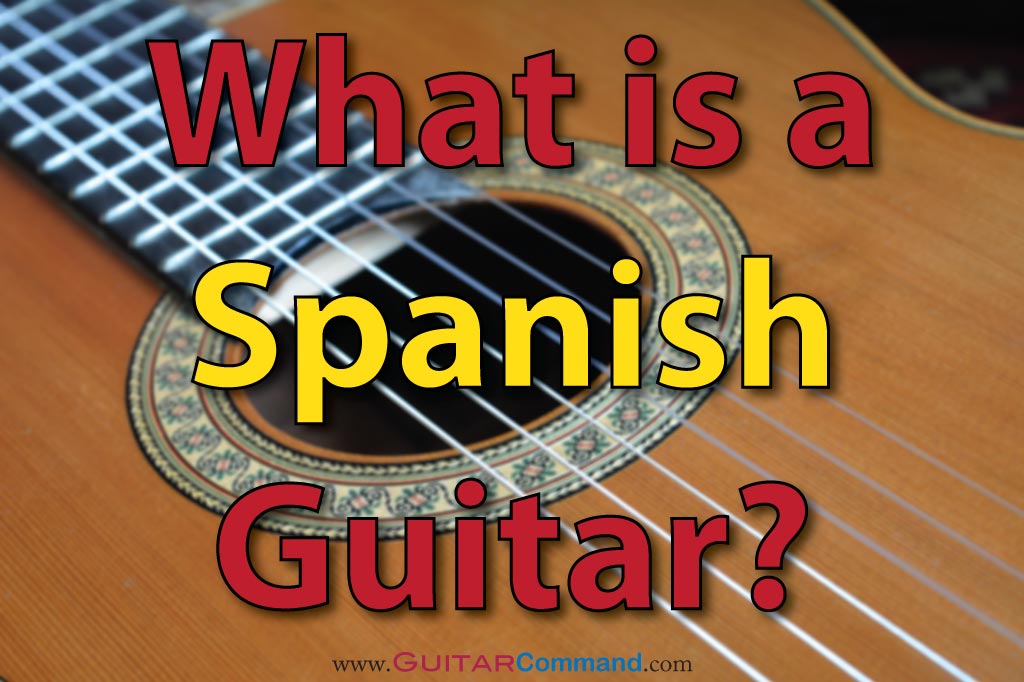 What Is A Spanish Guitar?

A Spanish guitar is a type of acoustic guitar that is strung with nylon strings. It is typically used to play either classical music or traditional music which is either Spanish or Spanish in origin.

The Spanish guitar is also known as the ‘classical guitar’ or the ‘nylon-string guitar’ (the names are interchangeable).

You can hear a Spanish guitar being played in the video below (the music is by Spanish composer Isaac Albéniz).

The standard tuning for a Spanish guitar is the same as that of a steel-string acoustic and electric guitar. Music for the Spanish guitar music is written an octave higher than it is played in order to avoid over-use of ledger lines (see Wikipedia) in the notation.

Unless the guitar is a left-handed model, it is the performer’s left hand that holds the strings down at the required position on the fretboard, and the right hand that plays the strings.

The strings of a Spanish guitar are typically played with the fingers rather than with a pick / plectrum. Most Spanish guitarists grow the fingernails of their right hand in order to achieve a stronger and more controlled sound.

The instrument is usually played while seated, with the guitar resting on the performer’s left leg (unless it is a left-handed guitar, in which case it would rest on the right leg). A footstool is often used to raise the leg (and therefore the guitar) to a suitable height.

The precursors to the modern Spanish guitar were plucked instruments such as the vihuela and the lute. Both of these instruments were strung with gut strings (i.e. material from the intestines of animals), as were early Spanish guitars.

The use of gut strings fell out of favor as suitable synthetic materials became available. Today’s Spanish guitars are strung with nylon strings, with the lowest three strings having an additional outer winding of metal.

The Spanish guitar has a soft, sweet tone. It is an extremely expressive instrument, with the player having a great deal of control over the tone being produced.

Various right-hand techniques are used which can substantially alter the timbre of the notes, while left hand effects such as vibrato, slides and slurs can be used to give melodies a lyrical, song-like quality.

In the video below, a right-hand technique known as tremolo is being used to give the impression of long, sustained melody notes (which would otherwise be impossible to achieve on a Spanish guitar):

The front panel of a Spanish guitar’s body is known as the ‘top’. It acts as a soundboard, amplifying the vibration of the strings. The wood out of which a Spanish guitar’s top is constructed has a strong effect on the instrument’s sound. Guitars with spruce tops tend to have a clear, bright sound. Those with cedar tops have a warmer but less defined sound.

Visually, spruce tops are blonde to tan in color. Cedar tops are darker, being pale brown to deep orange-brown.

Although both guitars are a similar shape, there are many differences between a Spanish guitar and an acoustic guitar.

Because a Spanish guitar is strung with nylon, rather than metal strings, its neck is under considerably less tension than that of an acoustic guitar. A Spanish guitar neck therefore does not require a truss rod*, and is constructed from a solid piece of wood.

* The metal rod that is inserted into the necks of both acoustic and electric guitars.

Being strung with nylon strings, the body of a Spanish guitar requires less bracing (the system of wooden supports inside the guitar body that hold the different parts of the body together) than that of an acoustic guitar.

Stringing a Spanish guitar with acoustic guitar strings is highly likely to damage the guitar.

The Spanish guitar is significantly louder than an acoustic guitar. The sound it produces is fuller, and has more depth (but less sustain) than the acoustic guitar, whose tone has a more metallic, ringing quality.

You can find out more about acoustic guitars on this page: What Is An Acoustic Guitar?

The machine heads of a Spanish guitar point backwards, whereas those of an acoustic guitar traditionally point out to the sides.

The strings of Spanish and acoustic guitars are tuned to the same notes, and the notes of their respective fretboards are the same. However, there is a great deal of difference in how the two instruments are played.

As we’ve found, the Spanish guitar is played while seated, and it is the fingers, rather than a pick, which are used to sound the notes.

Strumming, while a mainstay of acoustic guitar playing, is used only for effect in Spanish guitar (the exception to this is flamenco guitar, which relies heavily on strumming techniques).

There is a strict technique employed when playing the Spanish guitar. Most Spanish guitar students learn to read music, and the emphasis is on playing written music rather than writing songs and improvising.

The modern Spanish guitar, as well as having its own extensive repertoire, has in addition inherited the music of its plucked predecessors. Music originally written for instruments such as the lute and the vihuela is kept alive by today’s classical guitarists.

What Is A Spanish Guitar? Discover More with Guitar Command

You can find out more about Spanish / classical guitar playing on the following pages:

What Is An Acoustic Guitar