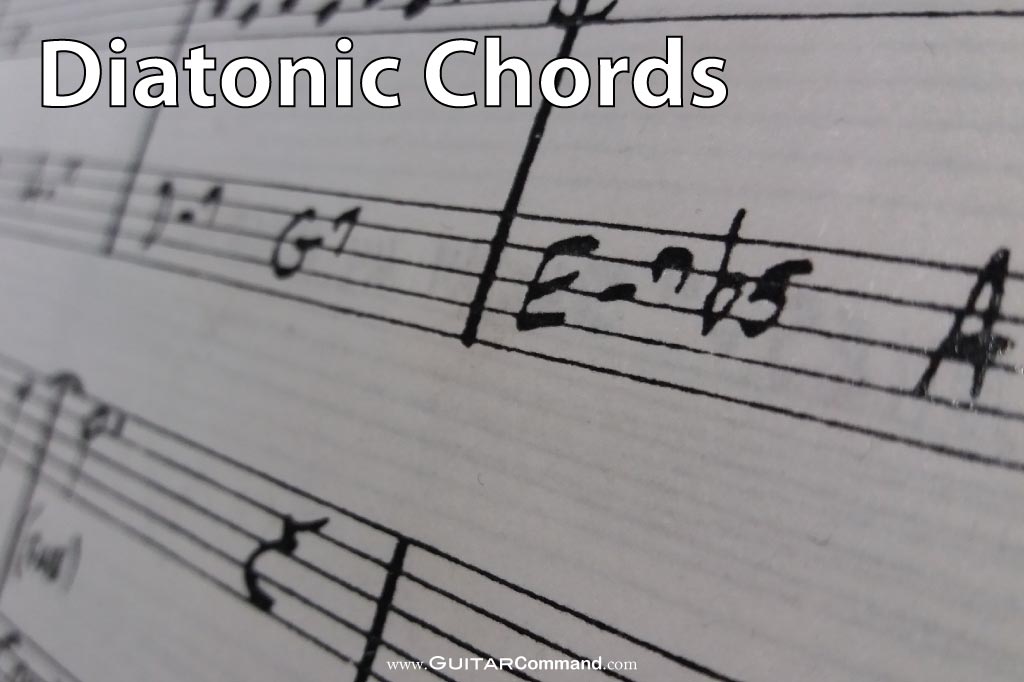 Knowledge of diatonic chords is useful for songwriters, improvisors, and anyone else interested in how music works. On this page you’ll find out what diatonic chords are and how to use them.

Also included is a list of the diatonic triads and seventh chords in every major key.

What Are Diatonic Chords?

Diatonic chords are the chords that can be made from the notes of a particular scale. For example, chords made using the notes of a C major scale are said to be diatonic to C major.

The predominant scale in a piece of music generally dictates what key the music is in. Therefore, diatonic chords can also be said to be the chords that belong to a certain key.

The diatonic triad chords of the key of C major are built from the notes of the C major scale, as shown below:

(When talking about diatonic chords, it is usually the triads built from a scale that are being discussed.)

Not all of the chords used to harmonize a melody have to be diatonic; non-diatonic, or ‘chromatic’, chords can also be used to bring additional color to an arrangement.

Music can change key. This means a new scale being used for the melody, and the new melody would therefore be harmonized with a new set of diatonic (and chromatic) chords.

Chords can be diatonic to one key and chromatic to the other. For example the chord of G major is diatonic to the key of C major but not to F major. (This is because an F major scale contains a Bb, therefore the triad built on the G is a G minor. See the ‘The Diatonic Triads Of All Major Keys’ section further down the page for more info.)

Why Are Diatonic Chords Important?

Knowledge of diatonic chords is useful both in songwriting and in improvising. In songwriting, knowing which chords belong to which key, and how they relate to the chords of other keys, can help you come up with new chord progressions and melodies.

Being able to tell which key you’re in while improvising is an important skill. This is especially true in music that changes key frequently, such as jazz and complex rock and pop songs.

If you know the current key of the music you’re improvising over, then you’ll be able to select a suitable scale to use.

Knowledge of diatonic chords is an essential part of traditional music theory and classical harmony.

On this page, we’ll examine the diatonic triads and diatonic seventh chords of every major scale.

We won’t cover minor keys on this page; they’re slightly trickier because there are more of them, and one, the melodic minor, uses different notes when descending than it does when ascending, giving it even more diatonic chords.

As we’ve seen, diatonic chords are the chords that can be made from the notes of a particular scale. Therefore, chords diatonic to a C major scale are built from the seven notes of that scale, namely C, D, E, F, G, A, B.

There are seven possible diatonic triads using the notes of a major scale; each note of the major scale becomes the root note of one of these chords.

The following diagrams will help to explain this:

Below is a chart showing all of the diatonic triads in each major key:

Triad chords contain three notes, the outer two of which are a fifth (perfect, diminished or augmented) apart. There are four kinds of triad: major, minor, diminished and augmented.

Triads can also be inverted, which means that the third or fifth becomes the lowest note of the chord, rather than the root.

The triad built from the fifth degree of the scale (i.e. G in a C major scale) is often extended to include the seventh note. This produces a dominant seventh chord, which is an important chord harmonically as it creates a strong pull back to the root triad.

The other diatonic triads can also be extended in this manner in order to create diatonic seventh chords. These chords are often used to harmonize melodies in jazz.

In a major scale, the order of diatonic seventh chords is:

Diatonic Seventh Chords In Every Key 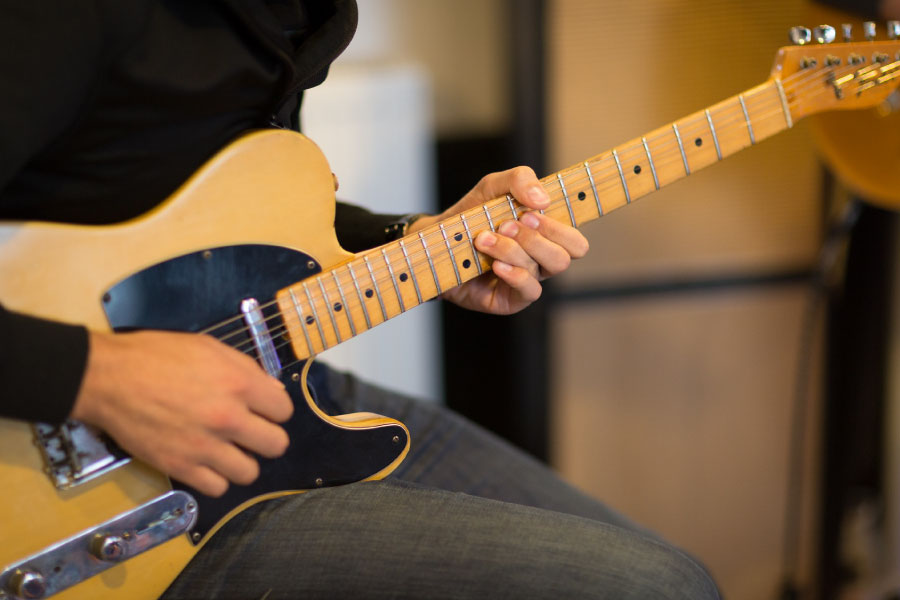 You don’t need to know about diatonic chord theory in order to write a good song, but even a passing knowledge of the chords present in different keys can help you to both create melodies and harmonize songs more effectively.

If you’ve come up with a good melody, perhaps by jamming over chords with lyrics you have already written, then you can try harmonizing it with diatonic chords.

For example, suppose that you have written a melody in C major over a repeated C to F chord progression. You could, at various points in the song, try playing an Am in place of a C chord, or a Dm in place of the F.

Both of these minor chords are diatonic to the scale of C, and their inclusion may add another dimension to the music.

You could also experiment with the diatonic 7th versions of the chords; this is particularly effective if you want a ‘jazzy’ sound.

These ideas may or may not fit with the song, but knowing diatonic chords gives you some useful tools to experiment with, and may help you to find that extra something that makes a good song into a great one.

You could also try adding some non-diatonic chords into your songs. Use chords that contain the notes of your melody. For example, if your song is in the key of C major, and your melody note is an E, try playing an A major chord underneath it.

The A chord isn’t diatonic (there isn’t a C sharp in a C major scale), but you may find that your song is suddenly given a harmonic twist that you hadn’t previously considered.

A technique used in Baroque times that is still relevant today is to find a chord common to both the key you’re currently in and another key. This chord can be used as a ‘pivot‘ to prepare the listener for a key change into the new key (perhaps from a verse into a chorus).

As you experiment, you’ll begin to find new ways of harmonizing your songs. Use the charts on this page to experiment with diatonic chords. Just having a little bit of music theory under your belt could mean the difference between a hit and a miss!

If you have any thoughts or questions then feel free to add a comment below; we’d be happy to help!

2 thoughts on “Diatonic Chords: What They Are & Why You Should Know Them”