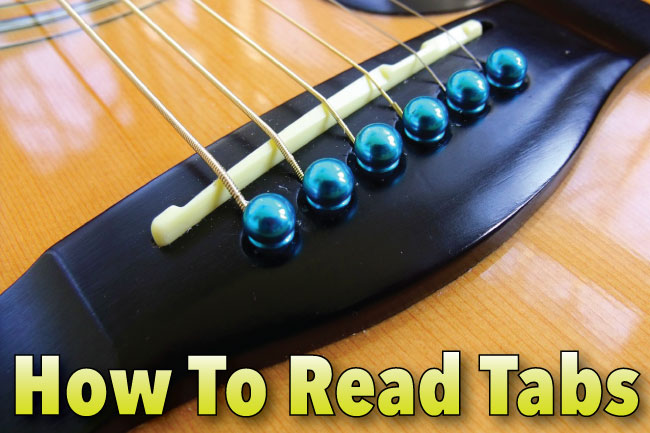 Lesson four of Guitar Command’s Learn To Play Guitar In Two Months series of articles shows you how to read tabs.

Tab is an alternative to music notation. It shows how music should be played on fretted instruments.

Tab is easier to learn than standard musical notation, and is widely used among guitarists. So, if you’ve been following the series and you’re confident playing chords, now is the time to start reading guitar tabs!

How To Read TABs: Introduction

Learning how to read tabs is a useful skill for the beginner guitarist. While TAB is not as versatile as traditional musical notation, it is far easier to learn. It is at its most effective when the guitarist already knows how the music sounds. This is because TAB is not as good as music at showing rhythms – i.e. how long each note is, and where the notes come in the bar.

Tab usually appears below standard notation. It can also be used without notation.

The horizontal lines on guitar tab represent the guitar strings.

The bottom line of tab represents the bottom E string, the second line up is the A string. This continues up to the top line which is the top E string.

The numbers on tabs show the fret at which the strings should be played.

In tab, an open string is shown as ‘0’. The example below shows the open strings of the guitar played from lowest to highest.

A ‘3’ on the bottom TAB line means that you should play the note at the third fret on the low E string. This would produce the note G.

A ‘2’ on the third line of TAB means that you should play the second fret of the D (or fourth) string. This would produce an E. These examples are shown below.

TAB is usually used in addition to standard notation, as in the examples on this page. This means that you can also see how the melody appears in notation form. This helps when you start to learn how to read standard musical notation.

Tab can also be used on its own, without notation. When this occurs, you should also get to know the music by listening to it, as tab does not accurately convey the rhythm of the notes.

Below is a C major scale in notation and guitar tab. Practice playing it up and down. This is helpful both for learning how to play guitar tabs and for coordinating your fretting and picking hands.

How To Play Single Notes On Guitar

Picking Hand – How To Hold A Guitar Pick

Hold the pick between your thumb and first finger. Your grip should be reasonably firm, but not too tight. When playing single notes you are making smaller movements than when you are playing chords. This is because you are aiming to hit just one string rather than several at a time.

The movement should come mainly from the wrist, but it is okay for your forearm to move slightly too. Only move your hand as much as you need to. An efficient style will help you to play faster and with greater accuracy.

Although it is not overly important at the beginning, try to get into the habit of using alternate upstrokes and downstrokes when playing scales and melodies.

You can find more information on picking here: How To Hold A Guitar Pick.

It’s easier to play single notes than chords with the fretting hand because you only have to worry about holding one note down.

Push the string against the fretboard, using only enough force to play the note without it buzzing. Any more force will be wasted, and holding the notes down too hard can make them sound sharp.

It is easier to hold notes down just behind the fretwire rather than in the middle of the fret.

Practice How To Read Tabs

Now you know the basics of how to read tabs, here are some example melodies for you to try. They are both well-known tunes, so try to see if you can work out the relationship between the tunes, the notation and the tab itself.

Do You Need To Learn To Read Music?

While much guitar music is presented in both tab and notation, you’ll eventually come across music without tab.

Because reading guitar tab has certain limitations, it is advisable that if you plan to play from scores you should also learn to read music early on. Eventually you’ll be playing solely from the notation, and will be better able to converse with other musicians.

However, there are many guitarists who don’t read music. Learning how to read tabs allows you to get to know new music quickly and easily. You can then learn to ‘read the dots’ as you progress in your musical career.

For more lessons in this series, see: Learn To Play Guitar In Two Months.

2 thoughts on “How To Read Tabs”