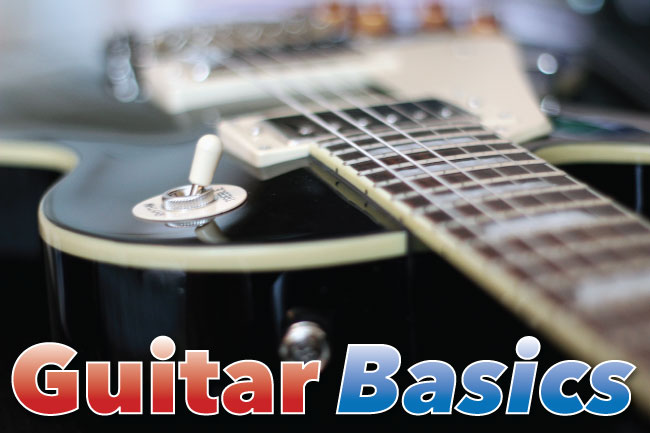 This page covers guitar basics. These are the things that you should know either if you’re thinking about learning the guitar, or if you’re in the early stages of your guitar playing career.

Subjects covered in this guide:

(Click to jump to the relevant section of the page.)

This list of guitar basics is by no means comprehensive, but it will be invaluable for those thinking about taking up the guitar.

Links to further free information available on this site (and elsewhere) are provided throughout the article.

There are four basic types of guitar: acoustic, electric, classical and bass. Let’s look at each of them in turn…

Acoustic Guitars have steel (or equivalent material) strings. They’re used in nearly all styles of popular music. Acoustic guitars can be used either as solo instruments or to provide accompaniment for singers or other instrumentalists.

* Devices that turn a guitar string’s vibration into electrical current.

If you see a solo singer / songwriter strumming chords while singing, he or she will probably be using an acoustic guitar.

Some acoustic (and electric) guitars have 12 strings rather than the usual 6. 12 string guitars are usually used for providing rhythmic accompaniment (strumming chords on a 12 string produces a loud, rich sound). As a beginner you’ll probably be better off getting a standard 6 string guitar.

Electric guitars rely on amplifiers to produce a usable sound – they emit only a very quiet, metallic sound when played acoustically.

Beginner guitarists usually find electric guitars easier to play than acoustic guitars. This is mainly because they require less pressure to be exerted in order for a note to be played.

When amplified, the basic, or ‘clean’, sound of the electric guitar can be altered by electronic means. Because of this, electric guitars are extremely versatile and can change from gentle strumming to distorted heavy metal sounds with the flick of a switch.

Classical guitars (also called ‘Spanish guitars’) are strung with nylon strings (although the three lowest strings are wound with metal). They are used to play classical music such as that written by Bach, Sor and Albeniz.

Classical guitars can be used in rock and pop music, often to add a Spanish sound to the music.

You can find out more about playing classical guitar here: Learning Classical Guitar

Bass guitars have four strings, which are tuned: E, A, D, G (the same notes as the lowest four strings of a standard guitar, but tuned an octave lower). Bass guitars generally provide the bass lines in rock, pop and jazz music. They can also be used to play lead lines and riffs.

You can find out more about the bass guitar and the differences between it and a standard guitar here: Is a Bass a Guitar?

Other Types Of Guitar

There are many variations within each of the main types of guitar. You can find out more about the different types of electric guitar here: Types of Electric Guitar.

Most guitars are available in both standard and left-handed forms. When playing a standard guitar, the player’s left hand will be holding down the strings on the fretboard, and his right hand will be plucking or strumming the strings.

‘Left-handed’ guitars are available, which means that each hand’s role is reversed.

If you’re left-handed, it’s definitely worth trying a standard guitar; most tuition books and videos are aimed at people who play standard guitars, and you’ll have a much wider range of guitars to choose from. If you really can’t get to grips with it then change to a ‘lefty’ guitar.

A standard guitar has six strings, which are tuned E, A, D, G, B, E, from low to high. The strings are numbered 6 to 1 from low E to high E.

The strings of a guitar can be tuned to other pitches, but this is by far the most common sequence.

If you don’t have a reference instrument or tuner to hand, then you can tune a guitar so that its strings are in tune with each other (but not necessarily with other instruments). This is fine if you’re just playing by yourself.

Guitar notation is written an octave higher than it is played.

When playing guitar, one hand (the fretting hand) holds down single notes or chords on the fretboard, while the other hand picks or strums the strings.

Should I Play With A Pick Or With My Fingers?

A pick (also called a plectrum) is a small, rounded triangular piece of plastic which is used to pluck or strum the guitar strings. It is usually held between the thumb and index finger.

Classical guitarists and ‘fingerstyle’ acoustic (and some electric) guitarists use their fingers instead of a pick to pluck the strings.

The left hand is used to ‘fret’ the notes, by holding the string down at the desired position on the fingerboard.

The right hand is used to sound the strings by causing them to vibrate, either by using a pick or by using the fingertips or nails.

Classical and fingerstyle guitarists, as we’ve already found, do not use picks. This gives them more control over the notes and chords being played.

A solo classical guitarist can produce self-contained music, made up of separate elements such as bass lines, chords and melody lines, without relying on other musicians.

However, it is harder to play fast solo lines using the fingers rather than with a pick. It also takes more effort to play loudly and evenly.

A chord is simply a group of notes played at the same time. There are many different types of chord, each with their own individual sound. The three most common types of chord are major, minor and dominant seventh.

Chord symbols are often used instead of the full names. The root note of the chord is given first, then the symbol for the kind of chord to be played. If there is just a letter with no symbol, then a major chord should be played.

Guitar chords are also often shown as chord boxes. Chord boxes are diagrams that represent the fretboard. They show where the fingers of the fretting hand should be positioned in order to play a particular chord.

Strumming is a way of playing chords rhythmically in order to provide an accompaniment for other musicians or singers. It is an essential basic technique for rock & pop guitarists.

A pick is generally used to strum chords, although the fingers or thumb can be used. Most non-classical players start off by learning chords. Many famous songs can be played using as few as three chords, so chord playing is a good way of introducing beginner guitarists to playing music.

When guitarists talk about ‘lead guitar’ they usually mean improvising guitar solos. However, the term can also be used to refer to playing the main part, rather than an accompanying part, in a song.

Lead guitar solos are usually built on guitar scales, such as the major scale, pentatonic scale or blues scale.

Riffs are short musical phrases that are repeated at various parts of a song. They can also be used as introductions to songs, and as accompaniment parts.

Many guitarists get by without reading traditional musical notation. This is because much popular music is improvisatory in nature, and also because guitarists also have two other ways of reading music: chord charts and tablature (usually shortened to TAB).

Chord charts show where in the music the chords should be played.

TAB is a way of writing music for fretted instruments. It shows the fret number at which the fingers should be positioned. It is often shown underneath traditional musical notation.

Traditional music notation (‘the dots’!) is used by all guitarists, but only for classical guitarists is the ability to read music considered to be an essential skill. However, in order to become a good all round musician, it is a good idea to learn how to read music from the beginning, no matter what kind of guitar you play.

Additional information on guitar basics is available on these pages:

We hope that this page has been useful to you if you are thinking about learning the guitar. The guitar is a versatile and expressive instrument, and has the potential to provide you with years of pleasure.

Because the basics are the same for all types of guitar, you can change between them depending on where you are in your musical career. Many classical guitarists started on electric or acoustic instruments, and vice versa.

Now you know the guitar basics, you’re ready to take the next step: Learn To Play Guitar In Two Months.

We wish you many years of happy guitar playing!

Guitar Command is a dedicated publisher of music and tuition material for the guitar. Our high-quality Guitar Backing Tracks are used by thousands of guitarists all over the world.

If you found this article helpful, please subscribe to the FREE Guitar Command email newsletter.

3 thoughts on “Guitar Basics: How To Get Started Playing Guitar”