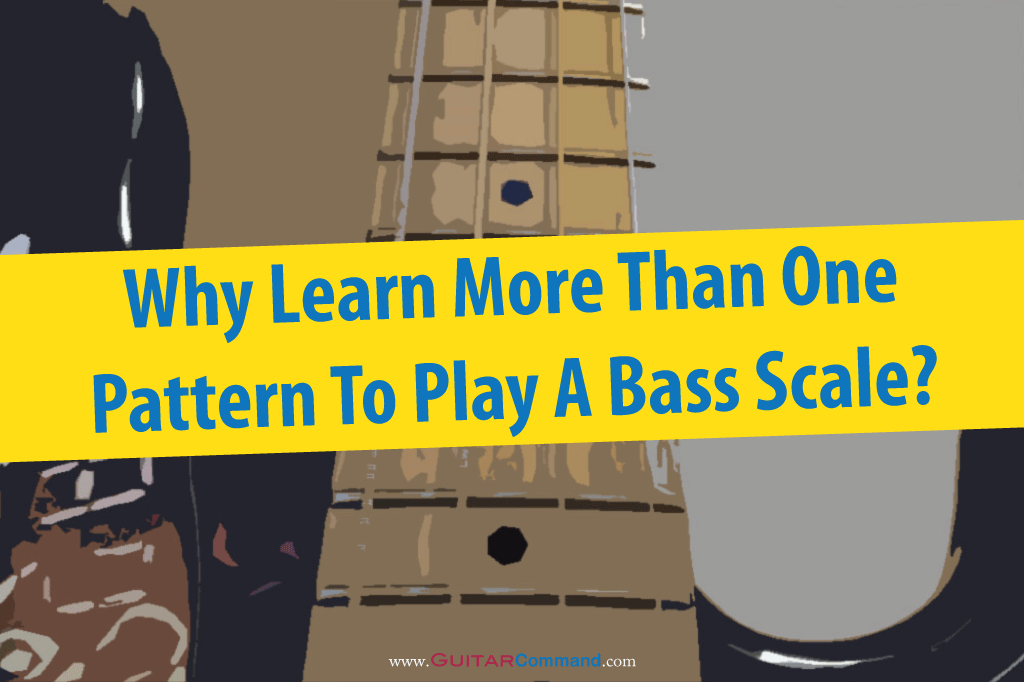 A single bass guitar scale is often represented with multiple diagrams. Why is this? Do you need to learn more than one pattern in order to play a scale on the bass guitar?

Many bass guitar scale books (including our own Bass Scales, Chords and Arpeggios Book) use fretboard patterns / diagrams to represent bass scales, and often provide more than one pattern per scale.

On this page we explain why there is often more than one bass scale pattern for a scale, and what those extra patterns are for…

You don’t necessarily have to learn scales in order to play bass; many (most?) bassists write their bass lines by ear or simply by following the chords of a song.

However, scales are useful for improvising and for coming up with ideas, not to mention improving your technique. Learning scales also helps you to build up your knowledge of the fretboard.

Bassists often learn scales as patterns rather than as sequences of individual notes. By doing it this way, scales can be transposed simply by playing the same pattern at a different fretboard position.

Although bass scale patterns make learning scales on the bass guitar (relatively) easy, they can be confusing at first–especially when there are multiple patterns per scale.

So Why Is There More Than One Pattern Per Bass Scale?

You’ll often see a single bass scale being represented not just by one pattern, but by several different patterns.

For example, all of the bass patterns below can be used to play either part of, or a whole pentatonic minor scale:

This can lead to confusion: ‘I just want to play a pentatonic minor scale; why are there five patterns–and which one should I use?’

The reason that there are multiple patterns per scale is that–due to the nature of the bass guitar (and other fretted instruments)–the same note can be played at multiple places on the fretboard.

Therefore, a scale–which, after all, is just a sequence of individual notes–can also be played at multiple places on the bass guitar neck. Having multiple patterns per scale simply reflects this.

To illustrate this point, play a C pentatonic minor scale using pattern 4, as shown in the TAB below:

Now play a C pentatonic minor scale using pattern 1 at the 8th fret (as shown in the TAB below).

Notice that, although you’re using a different pattern, the notes are exactly the same (albeit played at different frets):

Now play the same scale using pattern 5 in 5th position (i.e. so your index finger is positioned at the 5th fret, and the starting note is played with your little finger at the 8th fret), as shown in the TAB below:

Notice that although the TAB is different, the actual notes are the same; they’re just played at different frets.

It’s up to you as a bassist to select the most suitable scale pattern for playing the scale. We’ll cover how you should go about doing this further down the page.

Okay, so we’ve found out that patterns 1, 4 and 5 might be used to play exactly the same scale. This explains why there might be 3 patterns for each scale, but what about patterns 2 and 3? What are they for?

On a standard, 4-string bass guitar, it’s impossible to play 2-octave scales without changing fretboard position (i.e. moving your whole hand up or down the neck). There just aren’t enough notes available in each position.

In fact, some bass scale patterns (e.g. pentatonic minor patterns 2 and 3) contain only a single tonic note, and therefore can’t even be used to play a one-octave scale.

These patterns are included for two reasons:

The first is that you may want to play a riff or lick using a certain scale, but don’t actually need to play the entire scale from tonic note to the note an octave above or below it.

The second reason these ‘incomplete’ patterns are included is that each of these patterns can be combined with others in order to create lines which span more notes than are available in a single pattern.

You combine patterns by shifting your hand up or down the fretboard (usually to an adjacent pattern) while playing. Examples are given below:

The lick below uses pentatonic minor patterns 4 and 5.

The lick below uses pentatonic minor patterns 3 and 4.

You can’t play a 2-octave scale on a standard bass guitar without changing fretboard position. In the following example, several patterns are combined to make a 2-octave G pentatonic minor scale.

Which Bass Scale Pattern Should I Use?

If two or more scale patterns contain exactly the same notes, which one should I use?

As a bassist, it’s up to you to select the most suitable pattern for playing a scale.

For example, if you wanted to write a bassline using a D pentatonic minor scale, and you only knew pattern 1, then you’d be stuck playing up at the 10th fret (see the TAB below).

The TAB below shows the notes in the main scale, plus the ‘extra notes’ that are shown in the pattern but that fall outside of the 1-octave D pentatonic minor scale.

In this position you’d be playing relatively high notes that wouldn’t sound very bass-like. In many circumstances that would be okay, but generally it’s our job as bassists to underpin the song by providing the low end.

If you also knew pattern 4, then you could play at the 5th fret (see the TAB below). Yes, it’s the same scale, but at the 5th fret you’d also have access to the ‘extra’ notes on the E string – namely the A and the C at the 5th and 8th frets respectively.

You might prefer to have these relatively low ‘extra’ notes available as an option in your bassline.

If you also knew pattern 2, then you could incorporate the open D and A strings into your bassline, and you’d also have access to the low F and G on the E string (see the TAB below).

(Note that a full octave scale can’t be played using this pattern, so all of the notes could be considered to be ‘extras’.)

When choosing a pattern to use, ask yourself if you need to play a full octave and what other notes you want to be readily available.

Most of the time you’ll want to choose a pattern relatively low down the neck, but if you’re soloing or riffing you might want to venture further up the neck.

There are no hard and fast rules as to which pattern to use, so just experiment with the various patterns to see which falls best under the fingers.

Bear in mind that you don’t have to learn every pattern in order to use a particular scale in your playing! In fact, in many cases, simply learning pattern 1 is fine. Once you know the sound of a scale, you can then learn extra patterns as and when required.

We hope that this page has cleared up any confusion you may have had over why bass scales have more than one pattern, and which pattern you should use.

Please feel free to ask us any questions you may have in the comments below and we’ll try to help you out.

Check out these pages on Guitar Command for further information…