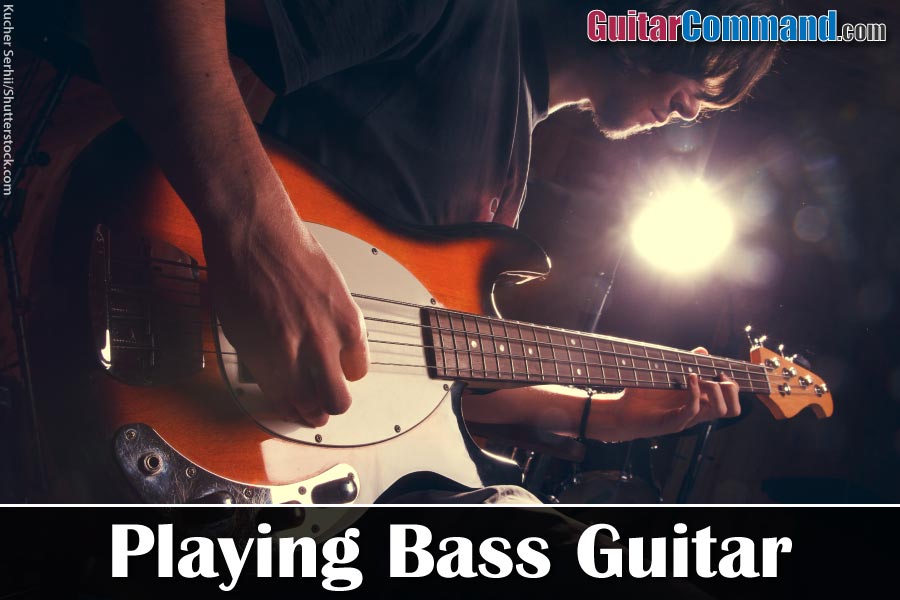 On this page, you’ll find a brief guide to playing bass guitar for beginners. We cover what a bass guitar is, the different types of bass guitar, bass playing styles, and the bassist’s role in a typical band.

In a typical song, the bass guitar supplies both “groove” – by reinforcing the rhythm of the drums, and harmonic context, by playing low notes that suggest the song’s chord changes.

In some songs, the bass line can be the focal point of the music; in others, the bass will play a more background role, filling out the music’s “bottom end”.

A bass player acts as “go-between” between the drums, which have a purely rhythmic role, and the melodic and harmonic layers provided by other instruments.

What is a Bass Guitar?

A standard bass guitar – such as the Squier Precision Bass, above – is a solid-bodied instrument with four strings. (As you’ll find out below, acoustic bass guitars, and bass guitars with more than the standard, four strings, are available.)

A bass guitar has a longer neck than a standard, six-string electric guitar and is strung with much thicker strings.

Tuned an octave lower than a standard guitar, the bass guitar is the lowest-pitched of all the instruments in the guitar family.

The bass guitar is the electric equivalent of the upright double bass (the strings of both instruments are tuned to the same pitches), and performs a similar role to that instrument, as well as other low-pitched instruments such as the ‘cello or tuba, in their respective ensembles.

A bass guitar is tuned in fourths. (Without getting too technical, a “fourth” is an interval of 5 semitones. Each fret is a semitone, so if you play a note at the 5th fret of any of the first three strings of a bass guitar, it will be the same note as the next string.)

The strings of a bass guitar are tuned to the following pitches:

Brief History Of The Bass Guitar

Although rudimentary bass guitars were developed earlier, the bass as we know it was designed and mass produced by Leo Fender in the 1950s.

The instrument was developed as a lighter, more portable, alternative to the upright double bass, which was commonly used in the jazz and rockabilly ensembles of the time.

Because the bass guitar was easy to transport to shows, and significantly less expensive, than a double bass, it achieved rapid success.

The inclusion of frets on a bass guitar, as opposed to the fretless neck of a double bass, made it a relatively easy instrument to learn. It also made precise tuning and note definition a major feature of bass playing.

In its standard form, a bass guitar is a solid-bodied instrument with four strings and a fretted fingerboard.

In more extreme genres of music, particularly in progressive metal circles, it’s common to see five or even six-string basses.

The extra string of a five string bass is typically tuned to a low B, expanding the instrument’s range downwards. A six string bass usually adds both a lower, and a higher string to the standard electric bass configuration.

Fretless basses, the fretboards of which, as the name suggests, lack frets – allow players to slide smoothly from note to note, producing a very distinctive sound (which is perhaps due for a resurgence?).

It can be quite challenging to play correctly-pitched notes on a fretless bass, so if you’re just starting out, you’d probably be better off learning on a standard bass guitar. 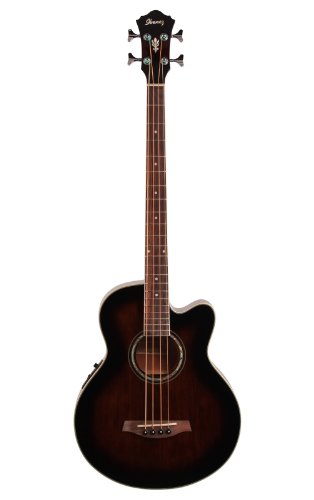 Acoustic bass guitars typically have pickups, which allow them to be plugged into amplifiers if necessary. 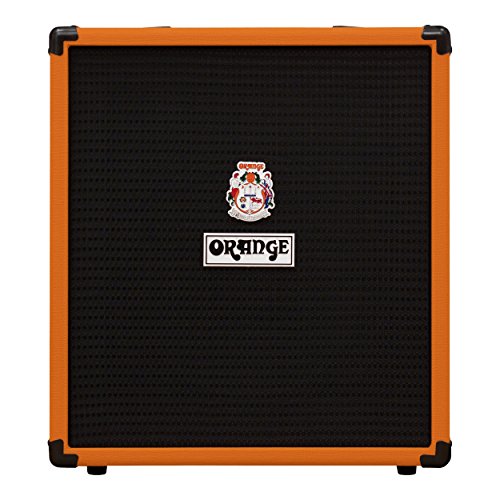 Bass guitars are, with the exception of acoustic basses, electric instruments. If you want anyone to be able to hear your bass, then you’ll need an amplifier.

Bass amps are similar, but not identical, to guitar amps. While you can play a bass through a guitar amp, at best, the sound won’t be great, and at worst, you might damage the speakers.

Bass amps and speakers are designed specifically for the low tones produced by a bass guitar.

Bass amps typically use larger speakers and higher wattages – 150 to 500 watts plus, as opposed to the 100 watts or fewer of a guitar amp – to push out the powerful low tones of the bass guitar.

This is because the low-pitched notes of a bass guitar have low frequency waveforms, which are longer than those produced by a standard guitar. This requires more power and a bigger speaker to produce a clear, discernibly musical sound.

If you’re just staring out on bass, however, we recommend that you use a combo bass amp. This way, you only have to purchase a single piece of gear, rather than two, and the combo will be easier to transport than a stack.

Similarly, you should consider the size of speakers in your rig. A lot of bass combo amps use a single speaker. One 12” or 15” speaker is plenty for your bass amp.

You don’t need to use a six-foot-tall, 8×10” speaker, “refrigerator” style bass cabinet similar to that used by Metallica’s Cliff Burton… at least not at the beginning of your bass-playing career.

There are plenty of great combo bass amps available from reputable manufacturers, including Roland, Orange, and Fender.

Other essential items of bass guitar gear are: a cable to connect your bass to the amp; a strap so you can play standing up; a tuner and (possibly) a few picks.

A tuner is essential when you’re starting out. Why waste time tuning by ear when you could be playing bass? Your ear will develop in time, anyway – perhaps faster if you’re used to a correct reference pitch.

A cheap, clip-on tuner (such as the Fender FT-2, below) will work fine. 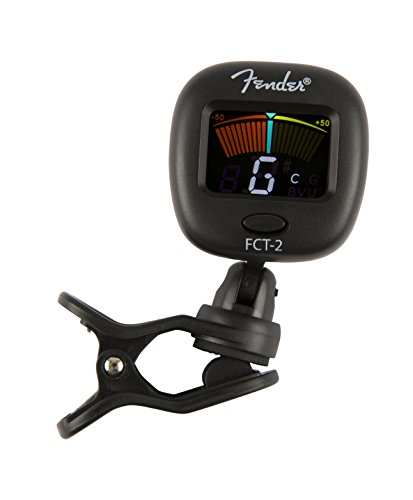 If you’re going to be using a pick (also known as a plectrum) to play bass guitar (see below), then bass guitarists tend to opt for large and thick / heavy styles.

Bass effects pedals aren’t usually a priority when you’re starting out, but experienced bass guitarists often use modulation effects such as chorus or flanger, and effects such as compression and overdrive / distortion, to modify / fill out their sound.

A bass multi-effects pedal, such as the Zoom B1X, below, is a great way to get a wide range of tonal versatility in a single unit. 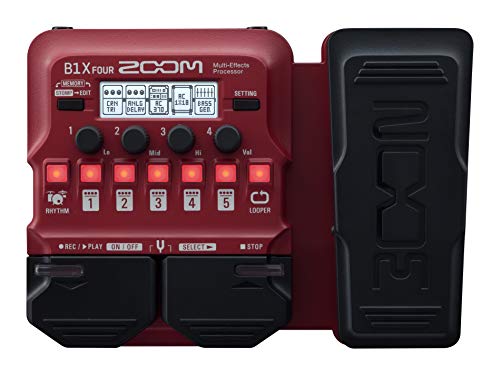 You can hear the bass guitar in most styles of popular music. Rock, metal, pop, jazz and country all feature the bass. (In the latter two styles the upright double-bass is also common.)

Old-school funk and disco are particularly well known for often featuring elaborate bass lines that incorporate a variety of techniques.

Broadly speaking, there are two schools of thought when it comes to playing bass. You either use a pick in your right hand, as you would when playing an electric guitar, or you use your fingers in a “walking” motion.

Playing bass guitar with a pick produces a clear, bright, precise sound that will cut through the mix.

Playing with the fingers, which is sometimes known as “fingerstyle”, produces a mellower, smoother and more expressive sound.

There are no hard and fast rules about which approach is best suited to a particular genre or style, although the more aggressive, defined sound of a pick tends to be favored in hard rock and metal styles.

That is not a strict rule, however, as some of the greatest metal bassists of all time, such as Iron Maiden’s Steve Harris, play using their fingers.

A sub-classification of fingerstyle bass playing, that arguably could be a style all its own, is slap bass.

Slap bass has an aggressive sound that is most associated with funk and funk-derived bass styles.

Flea, of the Red Hot Chili Peppers, is one of the most famous bassists associated with this style, although he has been known to dabble in other playing approaches, too. Another prominent slap bassist is Level 42’s Mark King.

Slap bass involves two main movements. The first requires the player to use the edge of their thumb’s knuckle, where it is particularly bony, to quickly strike the string against the fretboard.

The other is “popping”, which refers to pulling the string away from the fretboard and quickly releasing it so it snaps back against the fretboard.

The slap bass playing style is difficult to master, but sounds great when done well.

What Does A Bassist Do in a Band?

A bassist provides both rhythmic and harmonic elements to a band’s sound. Typically, a bass line will suggest a song’s underlying chord progression, with the notes being played rhythmically to enforce the beat provided by the drums.

The bass guitar does not always play a background role; a bassist is often called upon to provide (or back up) the main, focal point or riff of a song.

Bass parts can be simple, such as the single, repeated-note bass line in a typical AC/DC track, or elaborate, such as the melodic, wandering bass lines of bassists such as Yes’s Chris Squire and Rush’s Geddy Lee.

Low notes are great for articulating rhythm. The human ear is naturally tuned towards higher notes, which is why we typically appreciate intricate melodies in an upper register like that of the human voice.

For this reason, the range occupied by the bass guitar is often used to strengthen the rhythmic element of a song.

For example, Iron Maiden’s famous “galloping” sound, as exemplified on “Run to the Hills”, is defined mostly by the interaction of bass and drums locking in and highlighting particular beats.

Similarly, the “bouncing” bass of Motown and soul records like “I Can’t Help Myself” creates an identifiable beat for people to dance to.

Unlike drums, bassists can control how long a “beat” lasts for within the bar, allowing the rhythm section to control the overall groove and feel of a track.

Some bassists adopt a pronounced harmonic role within a band. Paul McCartney of the Beatles and Gene Simmons of KISS are well known for their use of melodic, walking bass lines.

Our Bass Tabs book provides a huge selection of sample bass lines and melodies for the beginner and intermediate bass guitarist.

You can find out more about the book here: Bass Tabs Book

We hope that this brief guide to playing bass guitar has increased your knowledge of the instrument and how it is played.

The bass guitar is a deceptively simple instrument; you could feasibly get a gig as a bassist within a few months of taking up the instrument, but if you want to set yourself apart from the crowd and become the next Geddy Lee / Paul McCartney / Jaco Pastorius, then you’ll need to devote a significantly longer amount of time to your bass playing!