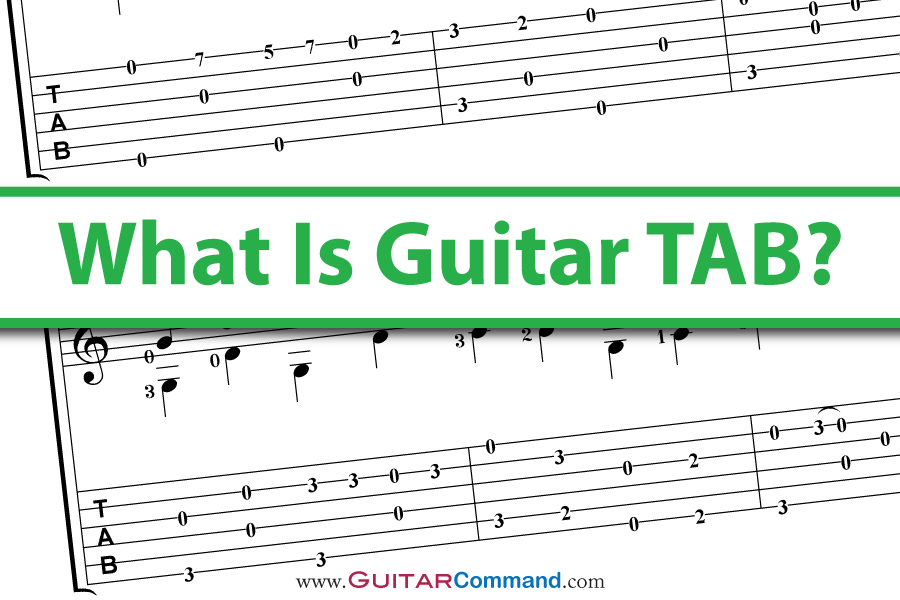 What is guitar TAB? On this page we explain what guitar TAB is and find out its advantages and disadvantages…

What Is Guitar TAB? A Definition

Guitar TAB is a form of musical notation in which notes are represented by numbers showing the fret at which the the string should be held down in order for that note to sound. The numbers are positioned on horizontal lines which represent the strings of a guitar.

See below for a note-by-note guide to reading TAB.

Guitar TAB can either represent a melody…

Guitar TAB is often provided as an alternative to traditional notation. It is usually presented on an additional stave underneath the musical notation that it represents: 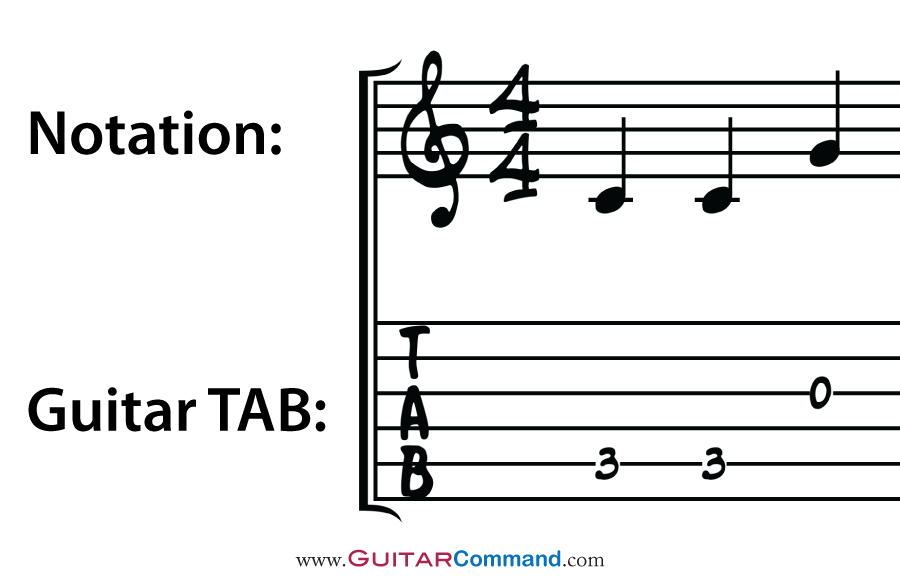 On this page you’ll find a brief explanation of how to read guitar TAB. For a more detailed explanation, see this page: How To Read TABs.

The ‘TAB’ in guitar TAB is short for ‘tablature’. Tablature has been used as a means of writing down music for fretted instruments for hundreds of years (according to Wikipedia, it first appeared in around 1300).

Music for both the lute and the vihuela (both early forerunners of the guitar) was commonly written in tablature.

Guitar TAB is regarded as being easier to read than traditional notation, and is commonly used by beginners. This is because using TAB requires no previous knowledge of notes and other musical symbols.

TAB has a number of limitations (which are discussed below) which make it less suitable for detailed music transcription. In particular, its lack of an adequate means of representing the rhythmic element of music mean that it is unsuitable for complex musical transcriptions.

How To Read Guitar TAB: The Basics

Standard guitar TAB has six horizontal lines, each of which represents one of the guitar’s six strings: 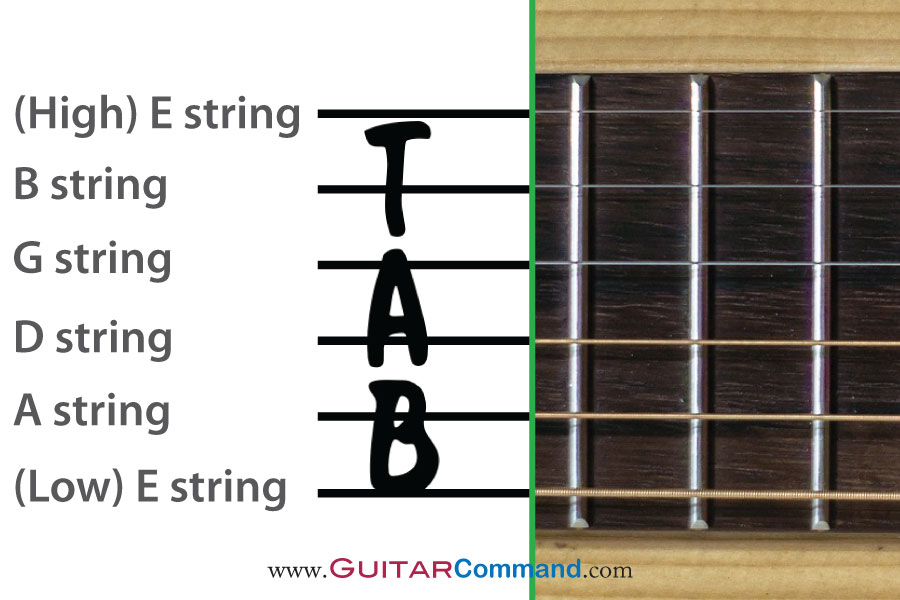 The numbers in guitar TAB represent the individual notes of a melody, chord, etc. They show the number of the fret at which the string should be held down by a finger of the fretting hand (one of the limitations of TAB is that it doesn’t usually specify which finger should be used). The other hand should them pluck the string in order to make the note sound.

When playing a standard, right-handed guitar, the notes are fretted with the fingers of the left hand and the strings are plucked, picked, or strummed with the right hand. The reverse is true with a left-handed guitar. 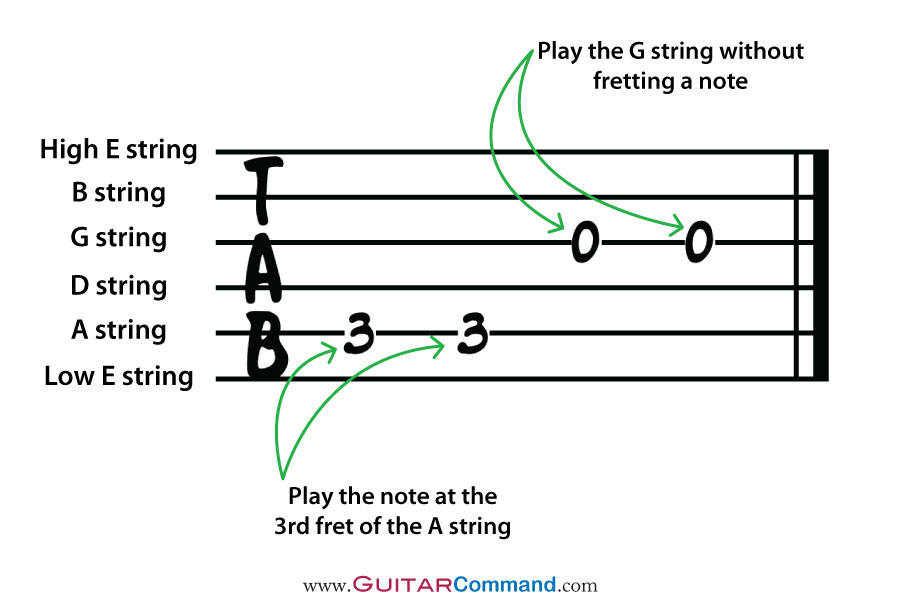 In the TAB example above, the A string is held down at the third fret by one of the fingers of the fretting hand. The string is plucked twice with the other hand to produce the 1st and 2nd notes of the melody.

The G string is then plucked twice to produce the 3rd and 4th notes of the melody (the ‘0’ on the TAB means that the string is played ‘open’, with no notes being fretted).

The numbers on the TAB stave are usually positioned immediately below the equivalent notes on the music stave:

Below are two well-known melodies in musical notation and guitar TAB: 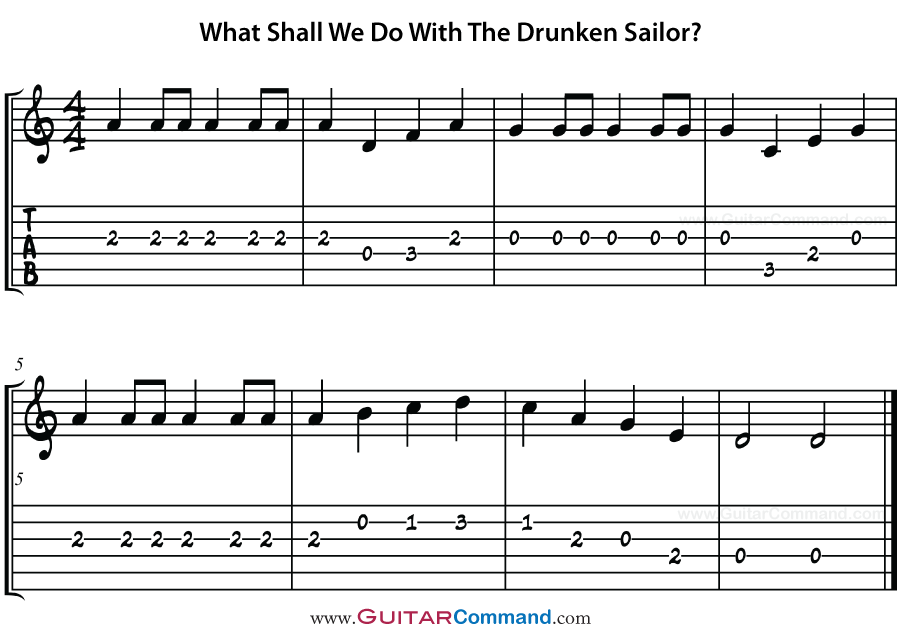 Guitar TAB’s simplicity is also its weakness. The main problem with TAB is that while it accurately represents pitch, it lacks an adequate means of representing rhythm. In fact, rhythmic information is often completely omitted from tablature.

In general, guitar TAB is only useful when the piece of music it represents is already known by the performer.

Guitar TAB lacks a means of showing the duration of each note (i.e. how long the note should sound for).

TAB also cannot accurately show when a note or chord should be played. Although TAB occasionally includes the ‘tails’ of the notes above the note numbers, this is not always sufficient to let the performer know when, or for how long, the notes should be played.

A musician who is able to read music can immediately tell by looking at a piece of music its general melodic shape, the range that it covers, and its harmonic and rhythmic complexity. This is not possible (to the same extent) with TAB.

Sight reading (the ability to play an unknown piece of music for the first time) is easier with traditional notation than it is with TAB, once the basics of music notation have been mastered.

Unless the music is previously known (by ear) by the performer, it is impossible to play an accurate rendition of the music from TAB alone. This is due to the lack of rhythmic information in TAB.

TAB Is Everywhere; Do I Need To Learn How To Read Music?

Although TAB is a great way of reading and writing music, as we’ve seen above it does have its limitations.

If you already know how a piece of music goes, and you just want to find out how to play it on guitar, then TAB is useful. This is because you’ll already know the rhythmic elements of the music.

If you’ve never heard a piece of music and you’re given it in TAB form, then it will be hard – if not impossible – for you to work out exactly how it should be played. You’ll have to know how to read the notation above the TAB to play the piece accurately.

Strictly speaking you don’t need to know how to read music in order to play the guitar. You can write your own songs and riffs and remember them by ear (or record them being played). If you want to learn other people’s songs / riffs / solos, etc. then you can work them out by ear or with the use of TAB.

That being said, we recommend that you begin reading music as soon as possible in your guitar journey; having a full appreciation of how music works will increase your enjoyment of the instrument and make you a better all-round musician.