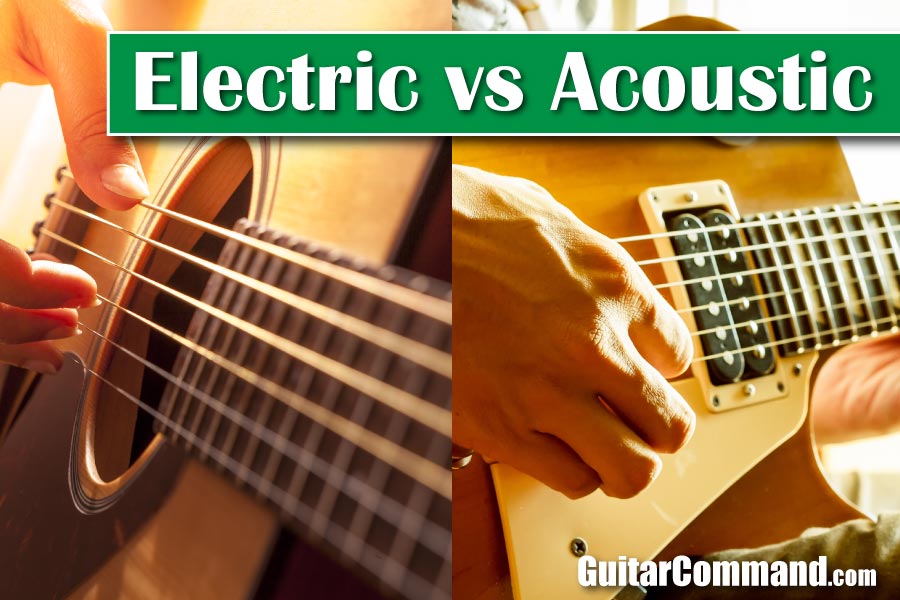 Electric vs acoustic guitar: what are the differences between the two instruments? What type of guitar is easiest to play? Which is easiest for a beginner? Which is cheapest?

On this page, we answer all of these questions and more, giving you are complete guide to choosing between an electric or acoustic guitar…

The Difference Between Electric and Acoustic Guitar

Which Is Easiest: Electric or Acoustic Guitar?

What Is An Electric Guitar Best For?

What Is An Acoustic Guitar Best For?

Which Type Of Guitar Is Best For A Beginner?

If you have any questions, feel free to ask them in the comments section at the bottom of the page.

The Difference Between Electric and Acoustic Guitar

Electric guitars usually have solid bodies and are equipped with pickups to convert the strings’ vibrations into an electrical signal, which is fed via a lead to an external amplifier. An acoustic guitar has a hollow body that amplifies the sound without the need for electronic amplification.

In other words, if you want your electric guitar to make anything other than a barely-audible, metallic sound, you’ll need an amplifier to plug it in to! An acoustic guitar, on the other hand, is loud enough to be played without an amplifier.

You can find out more about guitar amps (and see some beautiful classic amps) on this page: Guitar Amp Brands & Famous Amps

Because electric and acoustic guitars produce sound in such different ways, there are numerous other differences between the two types of guitar, not just in the actual sound they produce.

In this guide, we look at the difference between electric and acoustic guitars, comparing their construction, sound, price, and the kind of music each type of guitar is best for.

Below are the key differences between electric and acoustic guitars…

Due to their hollow construction, most acoustic guitars are bigger than electric guitars; not only is the body both wider and deeper, but the neck is also typically a little wider than that of an electric guitar.

This can make an acoustic guitar a little uncomfortable to play.

A typical electric guitar has a slim, solid body, which is often contoured for comfort. The neck of an electric guitar is slimmer than that of a typical acoustic guitar.

Early electric guitars were hollow, or semi-hollow, instruments aimed at jazz and blues players. Most modern players, however, associate the electric guitar with solid-bodied instruments such as the Gibson Les Paul or Fender Stratocaster, which were popularized in the mid-20th century.

Electric guitars, instead of a sound hole (or as well as, in the case of semi-hollow guitars), are equipped with one or more pickups. Pickups are magnetic devices that convert the vibration of the strings into an electronic signal. The pickups are mounted under the strings on the body of the guitar.

Electric guitars are usually fitted with an array of knobs that control the volume and tone of the guitar.

Electric guitars fitted with more than one pickup usually have a pickup selector switch. This allows the player to choose which pickup is currently being used. (A pickup positioned near the guitar’s bridge produces a bright sound; a pickup near the neck produces a warm sound).

These days, many acoustic guitars are designed with built-in microphones or pickups to allow you to play them through an amplifier or PA. Even these “electro-acoustic” guitars don’t sound like, or play in the same way, as true electric guitars.

Some electric guitars are even designed with “hybrid” technology allowing you to make a semblance of acoustic tone using the electric guitar. This type of guitar has its uses, but is not a substitute for a proper acoustic guitar.

Acoustic guitars have a distinctively bright, but “woody” tone. This is because, when you play an acoustic guitar without any amplification, all you are hearing is the natural resonance of the strings and the wood from which the guitar is made.

An electric guitar played clean (i.e., without any distortion), and without any effects, produces a mellow, ringing sound. The controls on the guitar itself can determine the color of this sound, which can be further modified by the amp’s controls and with the use of electronic effects.

In fact, it’s not uncommon to hear a variety of sounds from one electric guitar during the course of the same song!

Think of Nirvana’s “Smells Like Teen Spirit”, which features a dry clean sound, a big, distorted sound, and a warbling, phased-out lead guitar tone. All those tones were made using the same Fender guitar and a variety of pedals.

Electric guitars can produce a wide range of different sounds, from the percussive, clicky clean tone of Mark Knopfler to the take-no-prisoners distorted sound of Metallica.

As a general rule, acoustic guitars are more expensive than electric guitars of equivalent quality because they are harder to build.

Constructing an acoustic guitar requires more time, effort, and expertise, because it is made of many different pieces of wood, all of which must be shaped and joined together.

By comparison, even high-end electric guitars, such as Fender’s iconic Stratocaster, were designed to be made in factories in large quantities, and are relatively simple in their construction.

That’s not to say great electric guitars are not made by extremely skilled professionals, and that there are no decent, mass-produced, affordable acoustic guitars available. The reality is, however, that the intensive labor requirements for making a great acoustic guitar are reflected in their pricing.

That said, giant manufacturers such as Yamaha and Ibanez are able to mass-produce perfectly good acoustic guitars under $300, but in this price range there are more electric guitars on the market due to their comparatively cheap manufacturing costs.

A decent, beginner electric guitar can be had for under $250. The Yamaha PAC012, for example, would make a great first guitar.

You can get a pro-quality electric guitar for under $1,000, and a top-of-the-range one for under $2,000. On the other hand, high quality acoustic guitars, such as the top-end offerings from Martin or Taylor, will easily set you back over $3,000… or more! 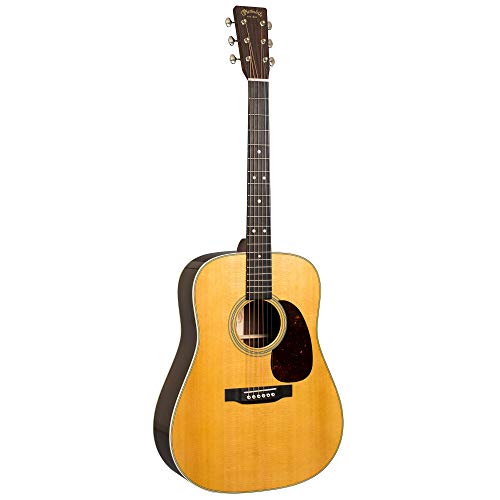 You can find out more about the cost of a new electric guitar on this page: How Much Is An Electric Guitar?

Playing-wise, electric and acoustic guitars are more alike than they are different. As a general rule, the tunings are the same, basic technique for picking and fretting applies to both, and the music theory for chords and melodies is applicable to both as well.

If you are a competent player on acoustic, odds are you can play electric guitar reasonably well, and vice versa.

At the end of the day, both are guitars.

At a more advanced level, it is worth noting that there are techniques that are only really used on one type of guitar.

Fingerstyle – playing with the fingers rather than with the pick – is a technique far more commonly employed on acoustic guitar.

Playing fingerstyle allows you to play solo pieces that have independent melodies and accompaniment. This is possible due to the more nuanced sound of an acoustic guitar, and simply don’t sound that great when tried on an electric guitar.

Which Is Easiest: Electric or Acoustic Guitar?

The relatively narrow neck, thin body and low action (the distance between strings and frets) of an electric guitar make it easier to play than an acoustic guitar for a beginner. Until your fingertips harden up and your hand gains strength, playing acoustic guitar can be quite tough physically – although you will get through the painful first stages eventually!

Therefore, if you’re just starting out, it’s probably easier to learn the basics on an electric guitar.

However, neither electric nor acoustic guitar is so much easier that it’s worth neglecting the other for. If you’re more interested in the sound of one or the other, you should play that type of guitar. There’s really no right or wrong answer here, and it’s down to your own personal preference.

What Is An Electric Guitar Best For?

The electric guitar is probably most associated with the rock genre and its various offshoots like metal and punk. It’s not a blanket rule, but generally speaking, you can expect the electric guitar to be a major feature of more upbeat styles of music.

What Is An Acoustic Guitar Best For?

In recent years, the acoustic guitar has become extremely popular in pop music. Ed Sheeran, one of the biggest pop stars in the world, exclusively plays acoustic guitars.

Acoustic guitar is commonly used in many genres of music, but the softer, warmer tones of the acoustic guitar are more closely-associated with soft rock, folk, and country music than they are with the aggression of high-voltage rock and roll.

You can hear acoustic guitar on jazz and blues records, too, although it’s common for proficient players in those genres to play both acoustic and electric guitars.

Which Type Of Guitar Is Best For A Beginner?

Although an electric guitar is slightly easier to play at the start, this shouldn’t be a major factor in your decision. Instead, select the guitar that’s most suited to playing the music you love.

If you want to play all styles of music, then we recommend you start on an electric guitar. Playing electric guitar is a lot easier on the fingers at the start.

The one disadvantage of starting out on electric guitar is that you’ll need an amplifier and a lead to connect the guitar to the amp. If you play acoustic guitar, all you need is the guitar itself!

Most of the big guitar companies sell beginner electric guitar packages that contain a guitar and an amp, plus a lead, picks and often a few other accessories: 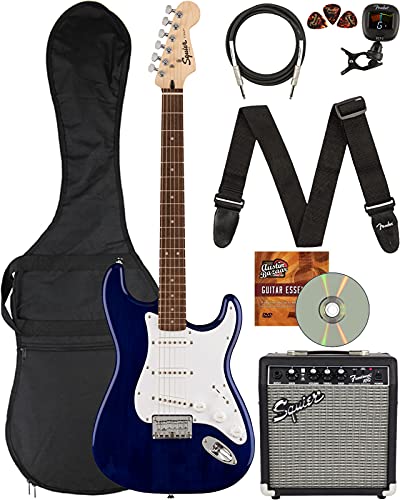 Another factor worth considering is that you can upgrade a cheap electric guitar to improve its performance more easily than an acoustic guitar. You can, for example, swap out the pickups in your beginner electric for more expensive pickups, and improve its tone that way.

One bonus of acoustic guitars is that they are better-suited to traveling because they are self-contained. You can’t (easily) play an electric guitar round a camp fire!

If you want to play rock music in a band then there is only one choice: an electric guitar. If you’re more interested in playing folk music or folk-inspired pop or rock music, or if you want to be a solo singer / songwriter, then acoustic guitar is the way to go.

Don’t spend too much time choosing whether to get an electric or an acoustic guitar – make your decision and get playing! You can always change over at a later date!

How To Play Rhythm Guitar

How To Play Lead Guitar