This article will show you how to hold a guitar pick and also explains basic picking technique.

Although there is no official ‘right way to hold a guitar pick’, we’ll show you a good basic technique that you can use, and if necessary adapt, to find a style that works for you.

Read on to find out more…

Why Play With A Pick?

Most electric and many acoustic guitarists play with a pick. Playing with a pick produces a clear, even tone and allows single note lines to be played at speed. A good picking technique allows you to play fast and evenly, and can improve your timing and confidence.

Despite these benefits, after the initial few weeks of learning guitar, many players won’t give a second thought as to how they hold the pick.

They’re often the same players who wonder why other guitarists are able to play faster and more fluently than them.

The key to finding a good picking style is a willingness to experiment and to try out new things. What works for some may not work for others, so take the time to find out what works best for your hand / wrist and playing style.

After that it’s a case of practicing and refining. Plenty of strict scale work with a metronome is the best way to improve your picking technique.

The following pointers will help you to achieve a good basic technique that can be further developed if necessary.

How To Hold A Pick

Hold the pick between your thumb and your index finger. Your grip should be reasonably firm, but should allow a small degree of movement.

Hold the pick towards the pointed end so that only a small triangle emerges from your fingers. The pick should be held at roughly 90 degrees to the thumb. Aim for a tip of around 4mm.

Whereas some players anchor their picking hand to the top of the guitar with their little finger, it is usually preferable to keep the hand free.

The right hand should hover closely over the strings, with the thumb loosely parallel to the strings.

The ‘at rest’ position of the pick should be at right angles to the string.

The thumb and index finger shouldn’t move and are kept fairly rigid. The other fingers of the picking hand should be loosely bunched together.

Keep your picking movements as small and as efficient as possible.

Some guitarists move their thumb and finger as part the picking action but this can be inefficient. Again, it’s a case of finding what works best for you.

The picking hand should be free to move up and down in order to access all of the strings. Don’t keep the hand in one place and rely on stretching your thumb and index finger to access other strings – move the whole hand to maintain your most efficient picking position whichever string you are playing.

A Tip For Finding An Efficient Picking Action

To find and develop an efficient picking action, start by playing a single note on one of the middle strings (e.g. the C at the 5th fret of the G string).

Using alternate (up and down) picking, play the note repeatedly as fast as you can. Aim for a ‘machine gun’ effect. You should find that your wrist has fallen into an efficient, comfortable picking action.

Once you have found a good action, use it to alternate between two notes on the same string, e.g. C,D,C,D,C,D,C,D,C,D etc.

Then, add another note on the same string and play up and down the three notes, e.g. C,D,Eb,C,D,Eb,C,D,Eb, etc.

Now use this action to play up and down scale fragments that incorporate two strings, e.g. C, D (3rd string) E, F, G (2nd string) and down again. You may have to change the picking action slightly to move between the strings. The aim is to play up and down these notes as quickly and as smoothly as you were playing the single note originally. This is the basis for your new picking technique.

What Kind Of Pick To Use? 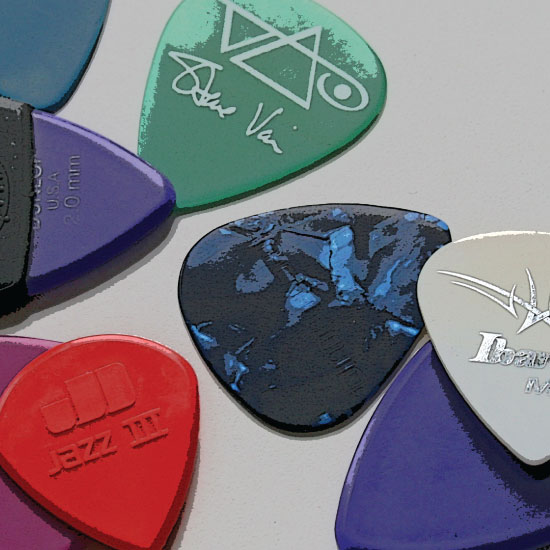 For fast, single line picking on an electric guitar you should use a medium-heavy pick at least. Any lighter will detract from the precision of our picking. The size and shape of the pick is a personal thing but I prefer a bigger pick, finding it easier to keep hold of.

The thickness of your pick also affects the sound. I prefer a very heavy, 2 mm pick as I  mainly play with a clean jazz guitar tone. The sound is noticeably different on recordings if a lighter pic is used. For shredders, and anyone else who plays with an overdriven or distorted tone, a good starting pick would be a large 1 mm pick.

However, as usual the best advice is to buy a selection and find what works for you. A much lighter pick may come in handy in some recording situations, e.g. for recording a lightly-strummed acoustic guitar part.

Other Ways Of Holding A Pick

There are other ways of holding a guitar pick. As mentioned, some players anchor their little finger on the guitar’s body. Others rest their palms on the bridge. Some jazz guitarists emulate George Benson’s picking style, and swear by its efficiency (search on YouTube for examples of this). Check out videos by your favorite player and watch for how they hold the guitar pick. Even if it looks effortless, they’ve probably put a lot of work into developing a style that works for them.