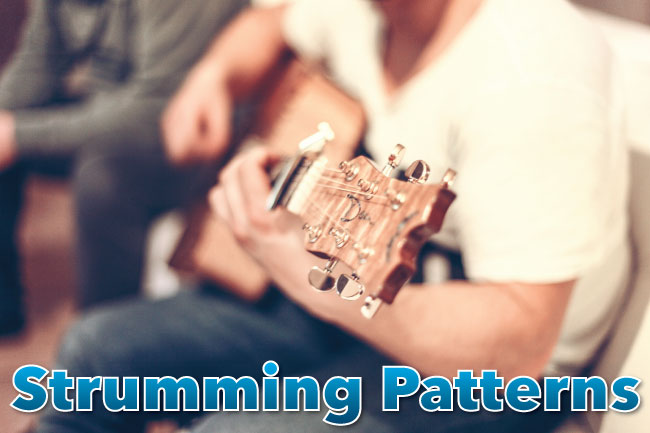 In the previous lesson, Simple Guitar Chords, we found out how to play chords using a very basic strumming pattern. In this lesson we introduce three more chords, and bring them to life with some new strumming patterns.

At the end of the lesson, we’ve provided some sample chord progressions so you can practice what you have learned!

New Chords For This Lesson

In this lesson we are going to be using the following new chords:

The simple guitar strumming pattern below is great for getting used to playing new guitar chords. Once you can play the new chords reasonably clearly, practice strumming them using this basic pattern.

Count a slow ‘1, 2, 3, 4’ beat, either in your head or out loud. Repeat this without stopping, keeping the speed of your counting even. Then start to strum downwards on every beat.

The ‘slash’ note heads on the music above represent the entire chord. This technique is used when a specific strumming pattern is called for by the writer / arranger of the music.

Most of the time strumming patterns for guitar are selected or improvised by the guitarist.

Remember to keep your counting / strumming at an even speed. The speed of the beat is known as the ‘tempo’ of the music.

As a rhythm guitarist, you’ll often be responsible for setting and keeping the tempo, particularly if you are accompanying a solo singer or instrumentalist.

Once you can play the basic strumming pattern evenly, try playing with a faster tempo. Experiment with giving the first beat a slight emphasis.

The patterns below introduce an up-strum at various points between the main down-strums. To play an up-strum, simply reverse the direction of your strum so that you play the strings as your hand is moving upwards. You’ll be touching the strings with the other side of your pick.

Start by playing an up-strum between every down strum of the basic strumming pattern shown above. This is not a pattern you would usually use when playing a song, but it’s a good exercise to get used to playing up-strums.

Before you play these strumming patterns, practice counting eighth notes. Add an ‘and’ between each count, e.g.: ‘One and Two and Three and Four and,’

Keep the main beat counts and the ‘and‘ beats evenly timed, without slowing down. The main ‘One, Two, Three, Four,’ beats should be at the same tempo as they were before the ‘ands’ were added.

Now you are counting eighth beats. In the following strumming patterns, strums will occur on the ‘and’ beats as well as on the main beats.

Audio examples are given using the ’50’s Rock’ chord progression shown below.

It is very good practice to play along with a metronome. This ensures that you are not unconsciously speeding up or slowing down.

You can buy an electronic metronome relatively cheaply, and there are also many metronome apps that can be downloaded.

Alternatively, use an online metronome such as this one.

Once you are used to playing the strumming patterns shown above, try playing the following chord progressions with them.

You can also find more example chord progressions here and here, although you may need to learn a few more chords to play them.

(If there is no chord indicated in the bar, simply continue playing the previous chord.)

Listen out for the rhythm guitar parts of songs and try to work out what the guitarist is doing, then try to emulate what you hear. Rhythm guitar playing is best learned by experimentation rather than by learning patterns by rote.

Below are some audio examples of more complex strumming patterns using the ‘Rock Ballad’ chord progression.

Try playing them for yourself!

How To Choose A Strumming Pattern To Use

All of the strumming patterns introduced here are widely used in popular music. However, strumming patterns are rarely written down. It’s usually left up to the rhythm guitarist to either select or to invent a suitable pattern to use.

Strumming patterns can also be varied for different parts of the same song (e.g. verse, chorus, etc.). Rhythm guitarists can also add rhythmic ‘fills’ in their strumming to introduce new sections of a song.

As you progress you’ll be able to strum songs without thinking about which pattern you are using.

We hope that you are enjoying and benefiting from these lessons. Let us know what you think in the comments below! For other lessons in this series, see the Learn Guitar In Two Months Lesson Index.

2 thoughts on “Strumming Patterns For Guitar”