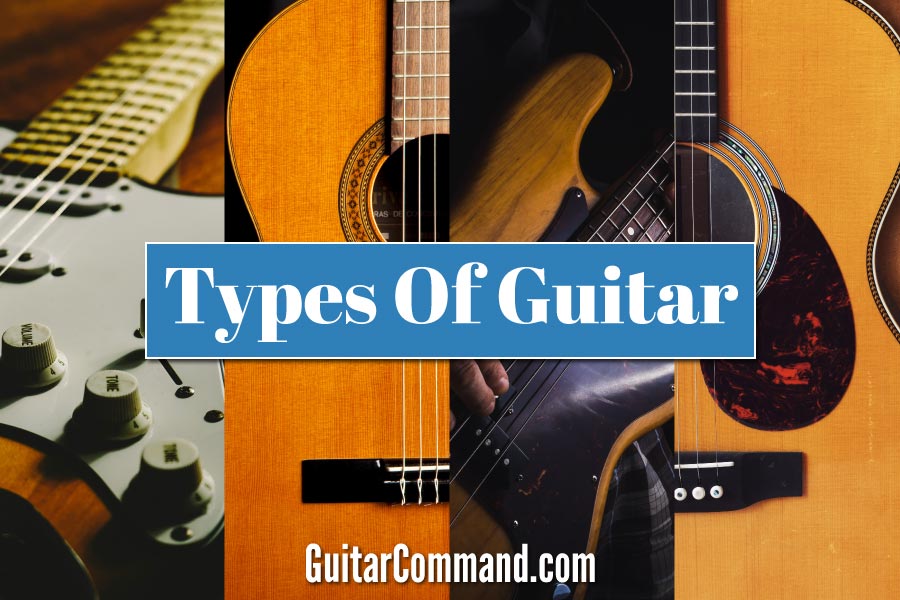 On this page we take a look at the major types of guitars and the difference between these instruments from a beginner’s perspective.

A Guide To The Different Types Of Guitar

The acoustic guitar has steel (or equivalent) strings and for this reason is also known as a “steel-string” guitar. The acoustic guitar is a fully-acoustic instrument; the sound from its strings is amplified naturally by its wooden, fully-hollow body, and projected via its central, circular soundhole.

An acoustic guitar is played either with a pick or with the fingers (a style known as “fingerstyle” or “fingerpicking”). A pick is usually used to strum chords when accompanying a singer, and in “flatpicking”, a playing style popular in bluegrass music.

Traditionally, acoustic guitars don’t have “cutaways” – recesses in the guitar body to allow access to higher frets – but this feature is becoming more common in contemporary acoustic guitar designs.

The acoustic guitar is usually used to accompany a singer/other musician or in a group setting, but it can also be played solo – i.e., without any accompaniment.

A dreadnought is a large, deep-bodied acoustic guitar, originally designed by Martin guitars. Dreadnoughts are typically very loud and have a powerful bass response.

Should I get an acoustic guitar?

If you want to play bluegrass, Celtic, folk and other traditional music styles, or if you want a guitar with which you can accompany yourself or others singing, then an acoustic is the guitar for you.

If you want to play rock music, then we recommend you get an electric guitar.

You can find out more about acoustic guitars on these pages:

An electro-acoustic guitar is an acoustic guitar that is fitted with a pickup (usually a piezoelectric pickup) that converts the strings’ vibrations into an electrical signal that can be fed to an external amplifier or PA system (via a lead, which plugs into a socket in the guitar’s body).

Should I get an electro-acoustic guitar?

Our advice would be to start off with a standard acoustic guitar, unless you’ve got the funds to get yourself a good-quality electro-acoustic.

Should I get a twelve-string guitar?

Probably not, if it’s your first guitar. Twelve-string guitars sound great, but are cumbersome, awkward to tune and not nearly as versatile as standard acoustic or electric guitars.

The classical, or Spanish, guitar is strung with nylon strings. A classical guitar should not be strung with acoustic guitar strings – the higher tension of the metal strings may seriously damage the instrument.

The classical guitar has its own, strict, playing technique. It is typically played solo, with the player seated and using a fingerstyle technique to play both the melody and accompaniment. Most classical guitarists grow the fingernails of their right hand in order to produce a loud, consistent tone.

The notes on the neck of a classical guitar are exactly the same as those on standard acoustic and electric guitars, so if you can find your way around the fretboard on any one of these, you’ll be able to do the same on the others.

Should I get a classical guitar?

Yes, if you’re interested in playing solo classical guitar music by composers such as Bach, Sor, Tarrega and Albéniz – for this purpose a nylon-string guitar is the only choice.

If you want to play rock or folk music then get an electric or acoustic guitar; the notes are the same, so you’ll always be able to switch later on in your career.

The classical guitar is one of the best types of guitar if you want to play solo (i.e., without other musicians). Like piano music, most classical guitar music is written for a single performer rather than a duet / larger ensemble.

You can find out more about classical / Spanish guitars on these pages:

Electric guitars are designed to be used with amplifiers. They have solid or semi-hollow (see below) bodies and are fitted with “pickups” – devices that contain magnets for converting the vibration of the strings into an electrical signal. This signal is carried via a lead to an amplifier.

When played without an amplifier, an electric guitar produces an extremely quiet, tinny sound. Even a semi-hollow electric guitar is barely audible in anything other than near-silence. 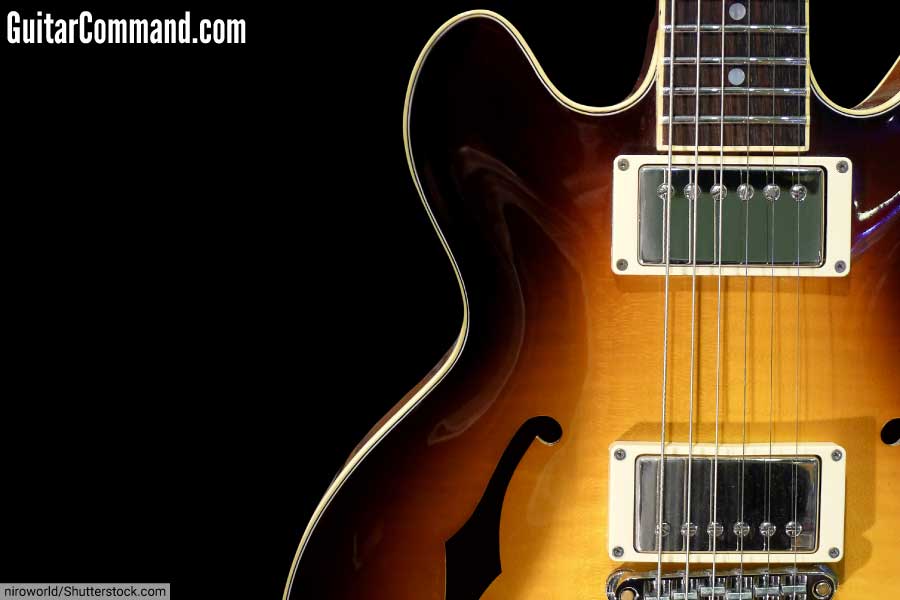 A semi-hollow guitar is an electric guitar whose body has one or more hollow chambers. The construction of most semi-acoustic guitars features a solid block running along the center of the body. This helps to reduce feedback. (Feedback occurs when an audio signal loops back on itself. It results in a high-pitched squeal from the speakers.)

Semi-hollow guitars often have a thicker but more responsive tone than solid body guitars, but lack the brightness of solid-bodied instruments.

Archtop guitars are fully-hollow guitars whose tops and backs are constructed from single pieces of wood which gently bulge outwards in the middle. This traditional way of building guitars is based on methods used in violin construction.

Traditionally, archtop guitars were fully acoustic instruments. Today, most archtops are fitted with pickups. Electric archtop guitars are traditionally used to play jazz music. One downside of fully-hollow electric guitars is that they are prone to feeding back.

You can find out more about jazz guitar on the following pages:

A bass guitar’s neck is longer and has wider frets than that of a “standard” guitar. Bass guitar strings are significantly thicker than guitar strings.

Most bass guitars have solid bodies, but semi-acoustic basses are available.

Bass guitarists traditionally perform a vital, but often overlooked, role in supplying the tonal foundation of a band’s sound.

Innovative bassists such as Geddy Lee, Chris Squire and Les Claypool have demonstrated that the bass can play a large part in shaping a band’s sound.

Should I get a bass guitar?

Yes, if you enjoy playing basslines. In general, the bass isn’t a solo instrument, so you’ll need to get together with other musicians if you want to get the most out of your instrument.

You can find out more about the bass guitar on the following pages:

Once seen as a gimmick, the five-string variant of the bass guitar has grown in popularity and is now a fairly common sight, especially in the heavy metal genre.

There are a number of ways in which the five-string bass guitar can be tuned. The most common of these adds a low B, making the pitches of all five strings: B, E, A, D, G. This extends the range of the bass downwards, enabling the instrument to perform powerful low-down riffs.

Six-string basses are also available. They are usually tuned B, E, A, D, G, C, thereby extending the range of the bass guitar both lower and higher.

Should I get a five string bass guitar?

Probably not as your first bass guitar. We suggest that you learn the basics on a standard, four-string bass. Once you know your way around the fretboard, you’ll know if you need the extra range offered by a five (or six) string instrument.

Fretless bass guitars lack the raised frets of a standard bass guitar. Although this makes playing accurate pitches harder, it allows legato (smooth) slides from note to note. Fretless basses produce a very distinctive sound and in the hands of players such as Jaco Pastorius and Pino Palladino can really bring basslines alive.

Should I get a fretless bass guitar?

We wouldn’t advise you to get a fretless bass as your first or only bass, but if you want to increase your tonal versatility further down the line, then give one a try.

On this page we’ve introduced the main types of guitars and provided a beginner’s guide on how they are used.

Whatever type of guitar you choose, it’s likely that you will be embarking on a journey that will benefit all aspects of your life – mental, physical and social.

Whatever age you are, and whatever your personal situation, making music is a positive experience, so procrastinate no longer – get yourself a guitar and get playing!