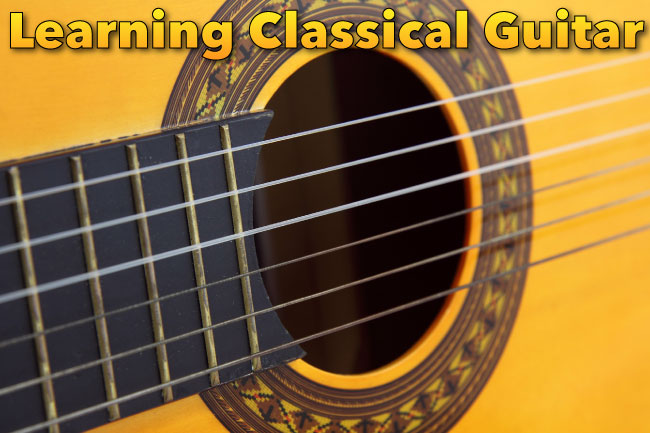 Welcome to Guitar Command’s complete guide to learning classical guitar. This article sets out to answer any questions you may have about taking up the instrument. It is aimed both at those who are completely new to guitar playing, and at those who already play electric or acoustic guitar.

We explain how the classical guitar differs from the other types of guitar, what music you will be playing, and what is involved in learning the instrument.

Many guitarists begin by playing acoustic or electric guitar, and take up the classical guitar at a later stage.

Although the technique used to play the classical guitar is different to that of other guitar styles, the notes of the strings and fretboard are the same.

Many guitarists play classical as well as electric or acoustic instruments, and have no difficulty in switching between the different styles. Learning classical guitar will not prevent you from playing other guitar styles!

You can teach yourself to play classic guitar, but it’s a good idea to get a teacher. You can see some good books about learning classical guitar here: Best Guitar Books.

Differences Between Classical Guitar & Other Types Of Guitar

A classical guitar produces a mellow, warm tone. Although players can create harsher sounds if necessary, they are neither as metallic nor as bright as those made by an acoustic guitar.

The classical guitar is not a loud instrument, but what it lacks in volume it makes up for in intimacy and expressive capability.

Classical guitar technique is more defined than that of other guitar playing styles, with a recognized ‘correct’ way of playing.

Classical guitarists play while seated. The instrument is usually raised to a more comfortable playing position with the use of a footstool.

Classical guitarists don’t use a pick. They use the fingers of the right hand to sound the strings. Several different right hand techniques are employed to produce a wide range of tones and sounds.

Right hand techniques include ‘tirando’ (free stroke), and ‘apoyando’ (rest stroke). When playing tirando, the finger strikes the string as part of a continuous movement. Playing apoyando, the finger comes to rest on the adjacent string after sounding a note. This produces an accented, broader tone.

Most classical guitarists grow the fingernails of their right hand. This helps them produce a clearer, more defined, sound.

Classical guitarists use vibrato in a similar way to other guitarists, but rarely bend the strings. Harmonics are often used, and in order to play certain pieces, the bottom E string is occasionally lowered to a D. Other tunings are also occasionally employed.

While learning classical guitar, beginners will be taught the basic playing technique, and will study pieces in open position. They will also learn the basics of music notation. Classical guitarists learn scales and arpeggios to practice their technique.

Most classical guitar music is written for a solo performer. Classical guitarists learn pieces from written music, and therefore are taught to read music early on in their studies.

This differs from electric and acoustic guitar playing, in which guitarists mainly play in groups or accompany singers. Many acoustic and electric guitarists do not read music, and instead rely on chord charts and TAB.

Although some classical guitar music is available with TAB, its use is not widespread.

Classical guitar repertoire includes music from the Renaissance to the modern day. Classical guitarists play music written for early plucked instruments, including the lute. Music by composers such as Vivaldi, Weiss and J. S. Bach can be performed on classical guitar.

The guitar originated in Spain, and Spanish (and Latin American) music forms a significant part of the repertoire.

The video below shows a performance of Sor’s Andante Op.31 No. 1. This is the kind of piece you’ll be able to play early on in your classical guitar studies.

In the UK and other countries, a classical guitarist’s progress is often marked by taking graded exams. The highest level of these, Grade 8, is seen as being the required standard for starting a music degree course.

After Grade 8, guitarists can go on to take diploma exams, either in performance or in teaching. Of course, taking exams is not a necessity, and many people learn classical guitar purely for pleasure.

Learning classical guitar allows you to play a wide range of music, including that written by famous composers such as J.S. Bach and Albéniz.

Although there are differences in playing techniques, players of other types of guitar usually find it quite easy to adapt to classical guitar. Many guitarists play both classical and acoustic / electric instruments.

If you are interested in learning classical guitar, it is a good idea to get some one-to-one lessons with a local teacher. This will allow you to learn the correct classical guitar technique right from the start.

We hope that this article has inspired you to take up the classical guitar. If you have any questions, feel free to ask them in the comments below.

Learn more about the different types of guitar.