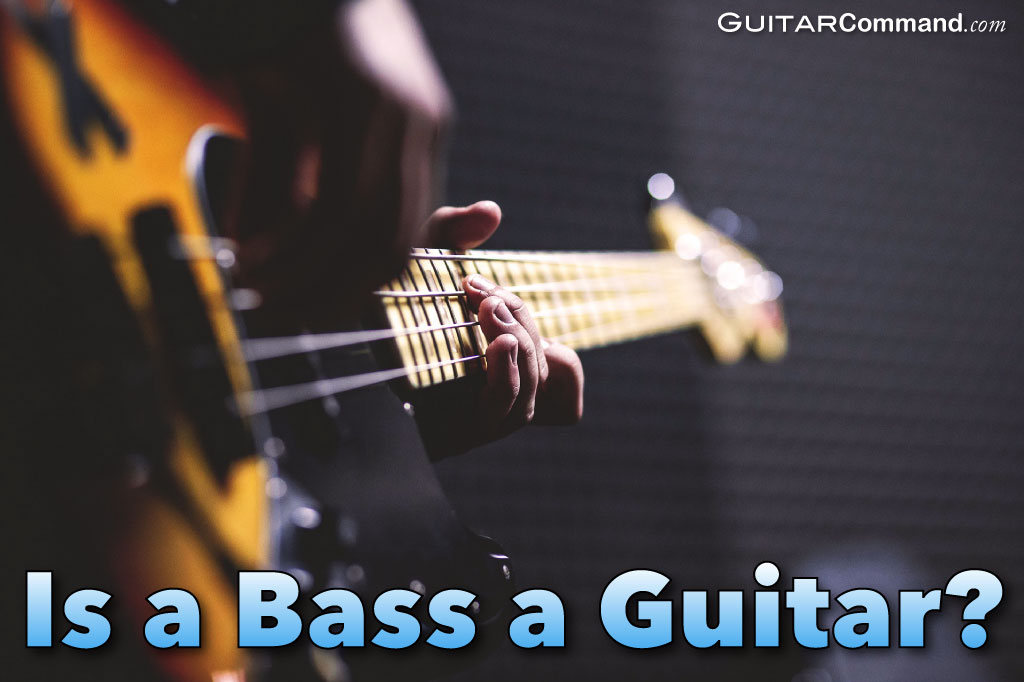 On this page we attempt to give a definitive answer to the commonly-asked question ‘is a bass a guitar?’ We’ll assume that the question is referring to a bass guitar, rather than to an upright bass.

At first glance, the electric bass could easily be considered to be a four string variant of the electric guitar; both instruments look much the same, and work in the same way.

However, there are fundamental differences between the two instruments which, in this article, we’ll take a closer look at.

Differences between a bass and a guitar

Similarities between bass and guitar

It could be argued that a bass is a type of guitar, after all it’s even called a ‘bass guitar’. However, given the number of differences between a bass and a guitar, the bass should be considered to be an instrument in its own right, rather than a type of guitar.

Although outwardly a bass guitar is similar to an electric guitar, its origins lie in a different family of instruments.

Whereas the bass is an electric version of the double bass – a member of the bowed violin family, the guitar’s ancestors are plucked instruments such as the lute and vihuela.

There are also significant physical differences between a bass and a guitar. The most apparent of these is that a typical bass has four strings compared to a guitar’s six. The bass is also designed to be tuned an octave lower, and has a correspondingly longer neck and wider frets.

Although there is some overlap in the technique used to play the bass and the guitar, each instrument has its own range of techniques and playing styles.

In addition, the two instruments traditionally play different roles within a band.

A bassist is usually seen as a member of a band’s rhythm section. Although a bass can be used to play riffs and solos, its primary function is to provide a rhythmic (and tonal) foundation to the band’s overall sound.

A guitar too can be used to provide rhythmic support, but is also far more likely than a bass to be used to play riffs and other melodic lines.

Another fundamental difference is that a bass is typically used to play single-note lines, whereas a guitar is also used to play chords. (Although, of course, chords can, and are, played on the bass. See this page: Bass Chords.)

Knowing this, it would be hard to argue that a bass is a guitar. Let’s take a deeper dive into the history of the two instruments…

History Of The Bass Guitar

The bass guitar is descended from the upright double bass, rather than from the various plucked instruments that gave rise to the guitar.

An upright bass is clearly not a guitar; it is constructed in a similar manner to instruments in the violin family, and it is with this group of instruments that it shares its ancestry.

An upright bass is traditionally played with a bow. Although it can be plucked (indeed, this is the technique used by most upright jazz bassists), it is known as a bowed instrument.

A depiction of a Byzantine lyra being played (with a bow) on an ivory casket has been dated to between 900 and 1100 AD.

The first bass guitar was invented by American musician and inventor Paul Tutmarc (See Wikipedia). The new instrument was released in 1936, and marketed as the ‘Audiovox Model 736 Bass Fiddle’.

Tutmarc’s bass fiddle appeared a few years after the earliest electric guitars, and was based on similar technology, having a solid body and using magnetic pickups to convert the strings’ vibrations into an electrical signal.

Unlike the upright bass on which it was based, Tutmarc’s instrument was fretted, and designed to be played horizontally.

History Of The Guitar

The guitar’s ancestors include instruments such as the lute and the oud, both of which were plucked. The word ‘guitar’ is derived from the Spanish word guitarra, which itself comes from the Ancient Greek kithara – a word first used for harp-like plucked instruments.

Instruments known as guitarras were being played in Spain in 1200.

Similarities Between A Bass And A Guitar

Although the bass and the electric guitar have their origins in different instrument families, there are many similarities between the two instruments. It is these similarities which give rise to the question ‘is a bass a guitar?’

The two instruments are very similar in appearance. In their standard forms both have solid bodies with ‘horns’ that allow the player access to the higher frets. Both are strung with metal strings, and both rely on pickups to convert the strings’ vibration into an electrical signal.

Both a bass and a guitar are tuned in fourths. The bass guitar’s strings are tuned to the same pitches as the guitar’s bottom 4 strings, albeit an octave lower. As a result the notes produced at each fret are the same.

Perhaps most confusingly, the bass is played horizontally – just like a guitar. This belies its upright bass ancestry.

Given the many similarities between the two instruments – especially in their respective appearances – it’s not surprising that those not ‘in the know’ consider a bass to be a guitar.

Differences Between A Bass And A Guitar

Once you have played a bass and a guitar the differences between the two instruments are much more apparent. The neck of the bass guitar is significantly longer, and the frets proportionally wider; even a major third interval is quite a stretch. Bass strings are much wider than even heavy-gauge guitar strings.

A bass neck feels huge after playing the guitar (likewise, an electric guitar seems very small and easy to play after a session on the bass!)

As we’ve already found, a bass’s role within a band is typically to provide a rhythmic and tonal foundation. The guitar, in addition to its rhythmic duties, is also employed for lead or melodic lines.

Is a Bassist a Guitarist?

Due to the similarities between the bass and the guitar, most bassists are able to turn their hands at playing guitar. However because the techniques involved are substantially different at anything beyond a basic level, many bassists stick to just the bass, and vice versa.

Is A Bass A Guitar? Conclusion

Although there are many similarities between a bass and a guitar, the instruments have their roots in different instrument families, are significantly different physically, and are typically used to play different roles within a band setting. Therefore, in our opinion, a bass should not be considered to be a guitar.

This answer is based on our personal experiences within the musical world; perhaps you feel differently. Do you think a bass is a guitar? Is it a type of guitar? Perhaps more importantly: why would anyone care? Let us know in the comments below!

1 thought on “Is a bass a guitar? A look at the similarities and differences between the bass and the guitar.”