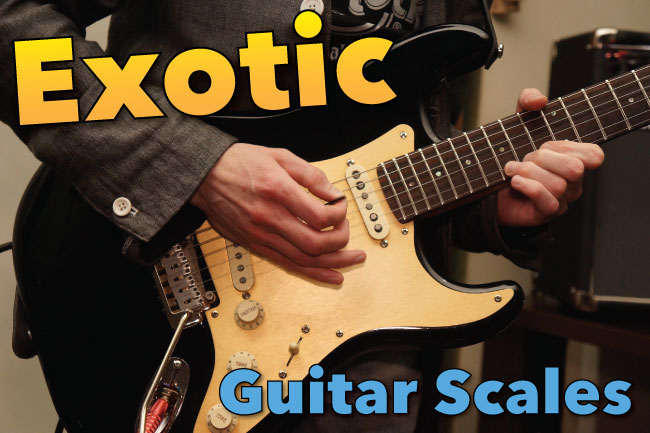 The double harmonic scale contains two augmented second intervals, and is widely used in traditional Eastern music. It can be slightly awkward to play on the guitar – the notes don’t fall under the fingers as they do with (for example) a pentatonic scale.

Persevere with the double harmonic scale, however, and you’ll have a very useful scale that will give another angle to your playing.

The Freygish scale is similar to the double harmonic in sound and structure; it is only the seventh degree of the scale that differentiates the two.

The Freygish scale is also known as the Spanish Gypsy or Phrygian dominant scale. This exotic guitar scale is often used in metal.

One of the best-known Japanese pentatonic scales, this scale is used in much traditional Japanese music.

The enigmatic scale was invented by Italian composer Giuseppe Verdi. It contains unusual intervallic sequences and with some experimentation you may be able to come up with some interesting lines using it.

This exotic guitar scale is formed from the diminished chord. The intervals throughout the scale are whole-tone, half-tone. Like the whole-tone scale above, jazz guitarists use this scale because it creates tensions when played over dominant seventh chords.

These exotic guitar scales can all bring something different into your playing. You can use them in improvisation or in composition – they can really help you get out of a creative rut.

You can find more interesting sounds for your lead guitar playing and / or composition on these pages: