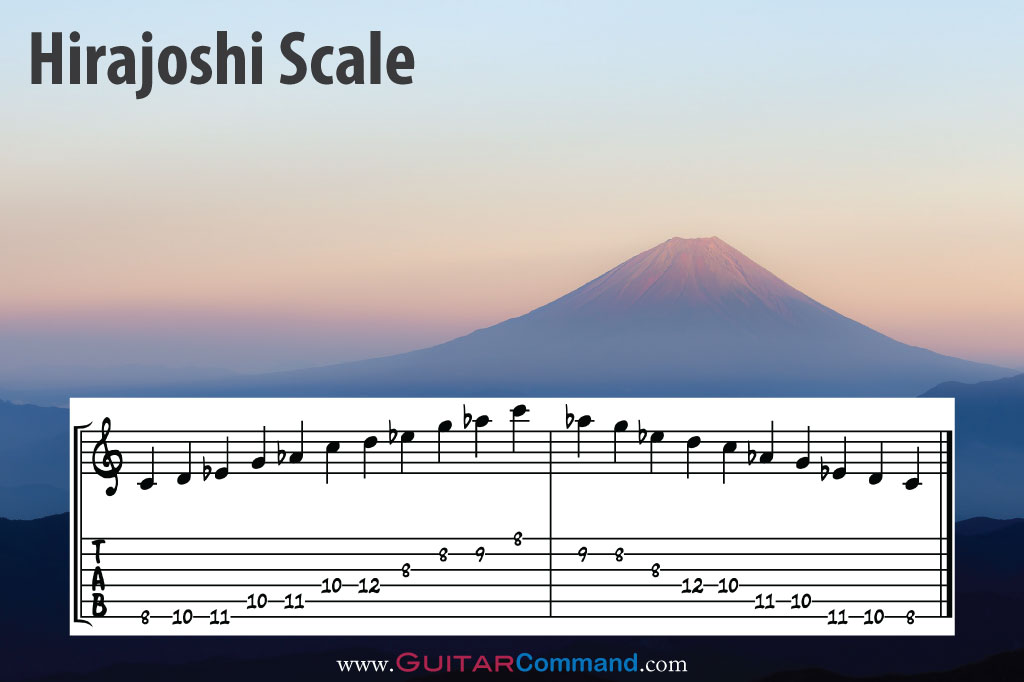 On this page you’ll find out how to play the Hirajoshi scale on guitar. TAB and scale patterns have been provided so you can use this interesting Japanese scale in your playing even if you don’t read music…

You’ll find many other interesting scales at our main scales page: Guitar Scales.

If you want a wealth of guitar scale (and arpeggio) information at your fingertips, take a look at our downloadable Guitar Scales Chart Book.

If you like the sound of the Hirajoshi scale, try some more Japanese scales.

There are other Japanese scales which are also known as the Hirajoshi scale. Further down the page you’ll find patterns for these. Click here to go straight to them

When played, the Hirajoshi scale produces an unmistakably Japanese sound. Try playing it in C using the TAB below…

The TAB above shows the Hirajoshi scale with a tonic note of C. It uses scale pattern 1 (see below) being played in 8th position (i.e. with the index finger of the fretting hand positioned at the 8th fret).

Using the scale patterns below you’ll have the Hirajoshi scale close to hand wherever you’re playing on the guitar neck.

The green circles on the fretboard diagram represent the tonic notes of the scale.

Other Scales Known As The Hirajoshi Scale

There are a number of other scales also known as the Hirajoshi scale, two of which are shown below. Notice that both are modes of the original scale. (You can find out what modes are here: Guitar Modes).

Spice up your guitar solos with other exotic scales: Exotic Guitar Scales