In our JamMan Solo review, Guitar Command gets to grips with the entry model in DigiTech’s loop pedal range.

In 2005 DigiTech introduced the JamMan, a loop pedal that for the time offered an impressive amount of storage time and options. The current range of JamMan pedals further improves on the specifications of the original unit and consists of the JamMan Delay, the JamMan Stereo, and the JamMan Solo.

Looping involves recording a phrase (or riff, chord sequence, etc.), which is then played back by the loop pedal in a continuous loop. Additional parts are then recorded on top of the original (overdubbed) as required. Any number of overdubs can be performed, thus enabling a solo musician to create complex, multi-layered arrangements. Loop pedals are also used to record and repeat a loop as a backing for improvisation, with no further overdubs being added. Looping is very much in vogue at the moment – YouTube is chock-full of videos of people performing impressive looping feats, and several artists specialise solely in creating songs and performances out of loops.

The recording quality, length of the loops, and the number of different loops that can be stored varies between loop pedals, but most modern loopers offer extremely high audio quality and very large (and often expandable) memory capacities. Modern loop pedals also allow the user to undo one or more layers of overdubs – useful if a mistake is made whilst recording. This JamMan Solo review will discuss ease of use, build quality and compare the unit with other loop pedals on the market.

The JamMan Solo loop pedal is aimed primarily at guitarists – it records only in mono, with a single quarter inch jack for input (although an 1/8th inch aux input for iPods and other units is provided, only a mono signal will be recorded). There are no stereo inputs for keyboards, etc. and no specialised microphone inputs – both of which are included in DigiTech’s more expensive JamMan Stereo model.

The JamMan Solo is a single pedal unit. Is is powered by a mains adapter (included in UK models), and does not run off a battery. Considering the amount of functions offered by the unit, there are relatively few controls – just two volume level pots (for loop level and rhythm level), and four other buttons. There are a number of single LEDs and one main display that shows the number of the loop being worked on. 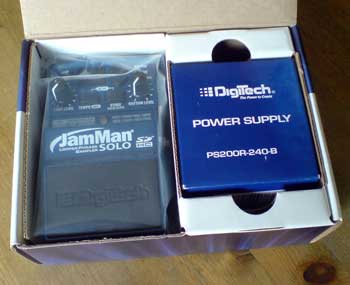 The JamMan Solo can store up to 35 minutes of CD-quality audio and 99 loops can be stored on board the unit. Memory is expandable to over 16 hours and a further 99 loop slots are available with an additional SD memory card.

Although space will always be limited on a unit of this size, the JamMan Solo’s user interface is a little fiddly; several buttons have more than one function or need to be pressed together or in certain sequences to access other functions. Although the basic looping process could be learned by trial and error, the JamMan Solo would be difficult to use to its full potential without a manual. Those who like their floor-based effects to be intuitive may find the JamMan Solo rather too complex. However, in fairness, a loop pedal offers significantly more functionality than say, a chorus pedal, and the basic controls are all reasonably accessible.

Loops can also be recorded using the JamMan’s metronome. The tempo is set using the tap tempo button (the foot pedal can also be used for total hands-free operation), and a click will be heard. (The time signature and style of the click can be altered.) The tempo can be varied by subsequent tapping of the button. Once the correct tempo is obtained, pressing the pedal will start a one bar count in, after which recording will commence. Recording using a set tempo means that recordings will loop from whole bars, rather than from the moment that recording is stopped.

Setting the tempo using the tap tempo button is fiddly and inaccurate, and the option to enter an exact tempo would have been a useful addition. The JamMan Stereo also suffers from this omission, and some may feel that this restricts the usefulness of both units. However, in an open mic or jam setting (which in likelihood is what the JamMan has been designed for) it is not such of an issue.

Sound quality is excellent – through a standard guitar amplifier no difference could be discerned between live and looped guitars. One clever feature of the JamMan Solo is that once recorded, the tempo of a loop can be changed without altering its pitch. Although doing so detracts from the sound quality of the loop, it is a useful feature for practice situations.

The JamMan Solo is a solidly built unit and should stand up well to life on the road. One slight concern is that the pedal itself will receive a lot of use (more so than a conventional effects pedal as it used to control a whole host of operations) and the mechanism inside seems rather flimsy (a rod from the pedal taps a delicate-looking pad mounted directly on the circuit board). The JamMan Stereo seems rather better constructed in this respect, with metal ‘amp footswitch’ style pedals.

Hands-free performances can be achieved using The JamMan Solo, provided only one loop is used per song. Changing a loop requires the performer to reach down to the selector buttons, a problem that can be overcome with the use of an optional footswitch. Performers who are likely to often use more than one loop per song may benefit by opting for the JamMan Stereo, as it is only slightly more expensive than the JamMan Solo plus a footswitch.

Another slight problem with the JamMan Solo is that in order to stop a loop the user is required to press the pedal twice in quick succession. This is rather inaccurate and makes clean endings difficult to achieve. Again, those wishing to perform live with their loop pedal may find the JamMan Stereo to be a better option, as it has a dedicated ‘stop’ pedal.

Once recorded, loops can be stored in the unit’s built-in memory, or onto an SD card (not included). Loops can also be stored and loaded to/from an external computer via USB using Digitech’s JamManager software. I have not heard of any problems with this method but it would have been nice if files could be transferred without having to install proprietary software.

The main difference between these two units is that the JamMan only records in mono, and the Boss RC-3 records in stereo. The Boss RC-3 is more expensive but also offers longer recording time in unexpanded form. From reading online reviews, one criticism of the Boss RC-3 is that when switching between loops, there is a slight but noticeable pause in playback. This makes using multiple loops per song difficult, and may discourage users who desire the maximum flexibility from their looper.

Throughout this JamMan Solo review, the pedal has been fun and inspiring to use. Although a number of small criticisms can be leveled at the JamMan Solo, in general it is a very capable bit of kit which can be used for a wide variety of practice and performance purposes. The basics can be quickly mastered, and impressive results are easy to accomplish. A little time spent with the instruction manual is recommended for those wishing to get the most out of the unit. Guitarists who plan to use a loop pedal frequently in a live situation may benefit by spending the extra money on the JamMan Stereo, which costs only a little more than the JamMan Solo and additional footswitch combined, and is easier to use in a performance setting. However, the JamMan Solo is more than capable of creating impressive ‘one-man band’ performances and for musicians who can do without the extra features of the Stereo version, is a good choice. Recommended.

More information on the Digitech JamMan Solo Loop Pedal can be found here. If you have any further questions or comments on our JamMan Solo review, please use the comments form below.