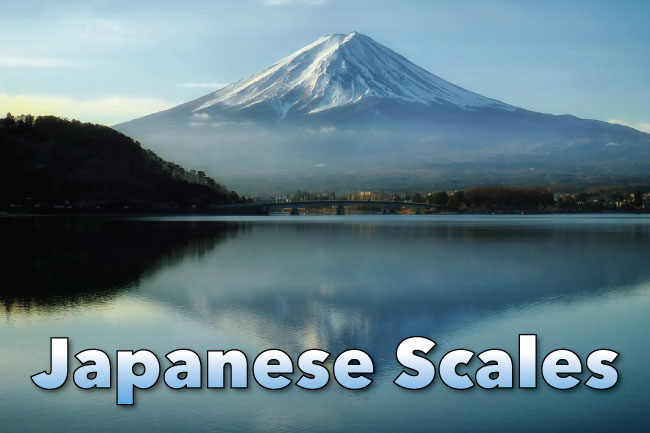 There are several Western interpretations of Japanese scales. They are all pentatonic (i.e. made up of five notes). Each of them produces a slightly different sound, but all are instantly recognisable as being Japanese in origin.

The In Sen scale is shown below in C, with TAB. Below is a diagram showing how to play the scale on the guitar. Its scale spelling is: 1, b2, 4, 5, b7

Similar to the In Sen scale, the Hirajoshi is spelt: 1, b2, 4, 5, b6. Below is the TAB and a diagram for playing the scale on guitar. This is one of the most well known Japanese scale. See Hirajoshi Scale for guitar diagrams for this scale in other positions.

Another Japanese scale is the Yona Nuki major scale. This is the major pentatonic in western music. Scale spelling 1, 2, 3, 5, 6

Similar to its major equivalent, but with flattened third and sixth notes. Scale spelling: 1, 2, b3, 5, b6

Many traditional Japanese songs are written using the scales above. If you like the sounds produced by these scales, try listening to some traditional Japanese music, either sung, or played on instruments such as the Koto. There are plenty of examples to be found on the web.

Japanese music can be beautiful and expressive, with a simplicity that is often lacking in western music.

If this has opened your ears up to more exotic scales, visit our Guitar Scales reference page and try out some more sounds.