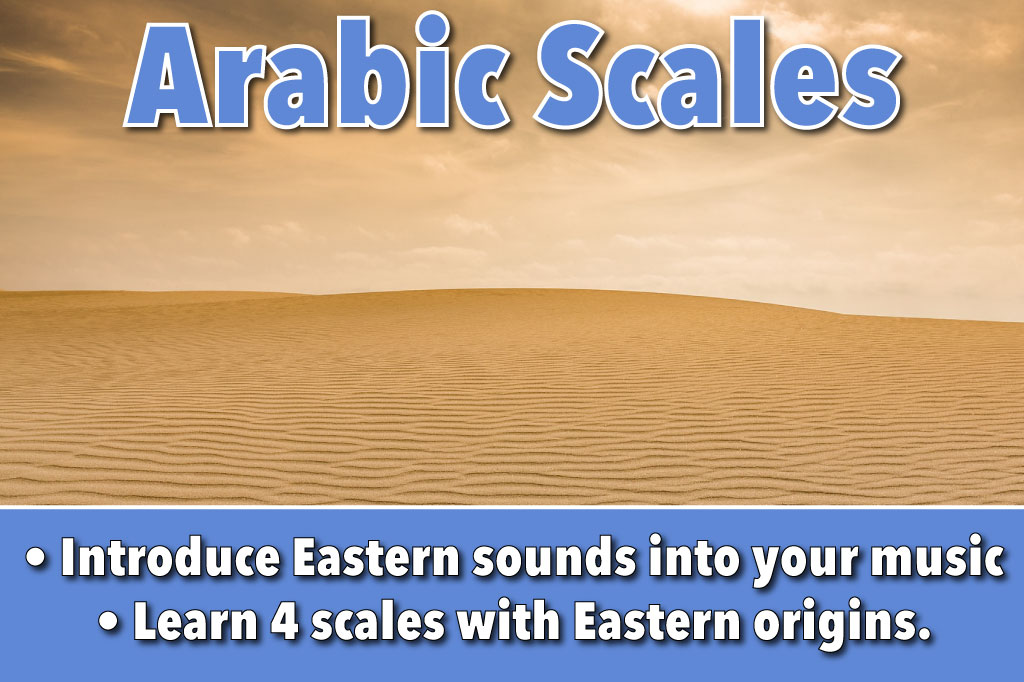 The name ‘Arabic Scale’ has been given to several different scales, each of which has an ‘Middle Eastern’ sound when played. Each of the scales below has at some time been referred to as an ‘Arabic scale’.

Although the scales on this page may have been used in traditional Arabic music (or are at least reminiscent of scales that were), it’s unlikely that the original musicians were thinking in terms of Western theory or notation; the scales here are likely more ‘translations’ of the actual scales that were used.

On this page, each Arabic scale type is presented in notation, guitar TAB and guitar pattern diagrams, allowing you to incorporate them in your own compositions and improvisations.

If you want to learn these scales in more than one position, take a look at our downloadable Guitar Scales book. It contains these and many other scales in multiple fretboard positions, allowing you to play them all over the neck.

This strange and rather beautiful scale possibly has the biggest claim to be the ‘Arabic Scale’. With the scale spelling 1, b2, 3, 4, 5, b6, 7 it is very similar to the Phrygian dominant scale, but with a raised seventh note. The scale has two augmented second intervals, giving it its enigmatic quality. For more information and diagrams for other positions see: Double Harmonic Scale.

The Half-Whole step diminished scale is another strange, ambiguous-sounding scale. It is octatonic (made up of eight notes), and is formed by alternate half and whole tone steps. Scale spelling is as follows: 1, b2, b3, 3, #4, 5, 6, b7. More info here: Diminished Scale Guitar.

The Phrygian modal scale is another scale known as the Arabic scale. It is the third mode of a major scale (you can read more about modal scales here: Guitar Modes.)

The Phrygian scale has the characteristic ‘eastern-sounding’ semitone interval between its first two notes that is shared by all of the scales here.

Any of these scales can be used when an ‘Eastern’ sound is required in your music. Out of these, the Phrygian dominant is probably the most widely known and used.

The double harmonic scale is possible the most authentic. You can find out more about Arabic music at wikipedia.

3 thoughts on “Arabic Scale: Introduce Eastern Scales Into Your Music”