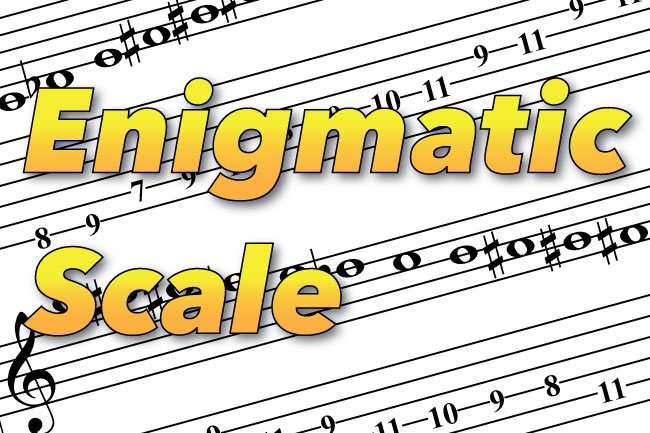 Learn how to play the enigmatic scale on guitar. Notation, tab and fretboard diagram is provided. We’ll also look at how the scale came to be invented.

The enigmatic scale was created by Italian composer Giuseppe Verdi, best known for operas such as ‘Aida’ and ‘La Traviata’, as well as his dramatic Requiem.

It is said that the enigmatic scale was invented in response to a challenge laid down by a music newspaper of the time. You can find out more about Verdi here: Verdi.

It is a difficult scale to harmonise in a traditional musical sense. In recent times Joe Satriani used the scale in ‘The Enigmatic’, a song from his ‘Not Of This Earth’ album.

Although it’s not really a scale that you can launch into during a blues number (although don’t let us stop you!), the interesting tonalities created by this scale may suit a jazz or experimental musical setting.

You could also attempt to use the scale in composition, and see what harmonies it throws up. Using exotic guitar scales in this manner can help you to discover interesting new melodies and chords.

If you’re interested in this scale, then you may also be interested in Japanese Scales, or you could check out the Double Harmonic Scale to discover some interesting Eastern sounds.