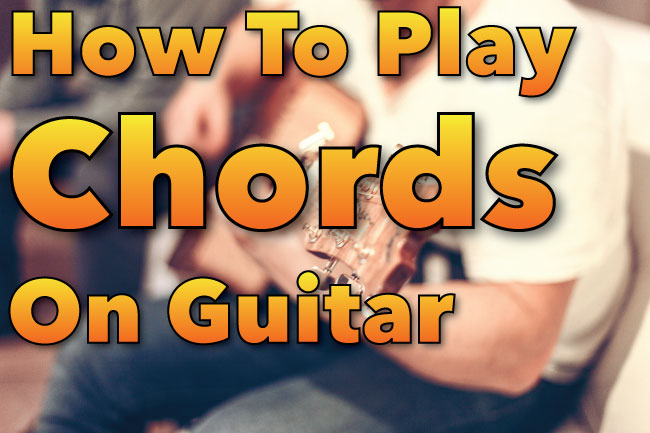 Learn how to play chords on guitar with this complete guide for beginners.

In this lesson you’ll learn how to strum guitar chords. Audio examples have been provided so that you can hear how the chords sound when being strummed.

How To Play Chords On Guitar: A Complete Guide For Beginners

One of the first things a beginner guitarist should learn is how to play guitar chords.

Being able to play guitar chords immediately opens up a world of musical possibilities: you’ll be able to play and write songs, and join or form a band.

How To Play Guitar Chords: The Basics

What Is A Chord?

A chord is a group of notes that are played at the same time. Most guitar chords consist of four or more notes, each played on different stings.

Chords can be strummed using a pick (plectrum) or with the fingers. More information on strumming – with audio examples – can be found further down the page.

Chord diagrams (also called ‘chord boxes’) are visual representations of the guitar fretboard. They show where the fingers should be placed and which strings should be strummed in order to play a particular chord.

The fretting hand holds down the notes as shown in the diagram, and the other hand strums the strings to play the chord.

How To Play An E Major Chord On Guitar

To play the E major chord shown in the diagram below, the left hand has to hold down three notes as shown by the black circles.

The strings with ‘O’s above them are open strings. They should be strummed without being fretted by the left hand – i.e. they are left ‘open’.

Beneath the chord diagram is a photograph of the same chord actually being played. The right hand strums across all of the strings to play the chord.

Chords That Don’t Use All 6 Strings

While some chords require all six strings to be played (as in the E major shown above), others require one or more of the strings to be omitted from the strum.

Strings that should be omitted from the chord are marked with an ‘X’ in chord diagrams.

In the A Major chord shown below, the bottom E string shouldn’t be played in the strum (and has been marked with an ‘X’ to indicate this).

Omitting individual notes from strums can be tricky, and it often doesn’t really matter if the string is accidentally played.

However, some chords can end up sounding pretty terrible if the extra notes are allowed to sound, so being able to omit notes from strums is a technique worth learning!

There are many different guitar chords, but they can all be boiled down to three main types: major, minor and seventh chords.

Minor guitar chords sound ‘sad’. Compare the sound of the minor chord in the audio example below to that of the major chord.

Dominant seventh (or ‘seven’, or just ‘7’) guitar chords have an ‘expectant’ sound and can be used to prepare the listener’s ear for the arrival of another chord (and often, another key). You (probably) wouldn’t end a song with a 7 chord!

Can you hear how the seventh chord prepares the ear for the arrival of another chord?

Strumming is a way of playing guitar chords rhythmically, by playing several strings with the pick or fingers in one upwards or downwards movement. In doing so, the individual notes of the chord are played at virtually the same time

Strumming rhythms can be varied depending on the the style of the music being played. Listen to the examples to hear two different strumming patterns.

You can learn more about strumming chords here: Strumming Patterns For Guitar.

• With the fretting fingers, hold the strings down just behind the fret rather than in the middle of the fret – this way you don’t have to press so hard to stop the notes ‘buzzing’.

• Try to keep the thumb of the fretting hand centred at the thickest bit of the neck for maximum leverage.

• Playing guitar chords for the first time can make your hands ache and / or fingertips sore. Over time your hands will beecome stronger and your fingertips will harden up.

• Practice ‘arpeggiating’ the chords (i.e. play the notes one-by-one rather than all together) as you learn them to make sure that every note in the chord sounds clearly, and that unwanted notes are not being played.

How To Play Chords On Guitar: Conclusion

We hope that this lesson has been helpful in showing you how to play chords on guitar. Feel free to ask any questions in the comments section below!

1 thought on “How To Play Chords On Guitar”