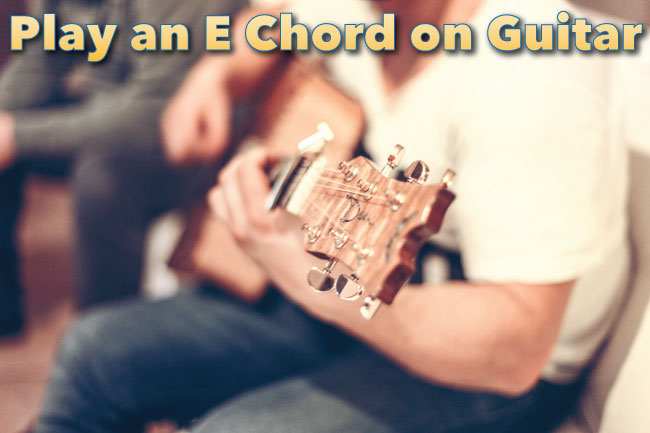 E chord guitar finger position charts, diagrams, photos and information. Everything you need to play a E major chord on your guitar.

On this page we’ll show you a basic E chord shape, as well as barre chord shapes. Further down the page we’ll also explain what a E chord actually is, and look at the notes it contains.

Want to play an E Chord on guitar? This is how you do it!

The above diagram shows you how to play a basic E major chord on guitar. This is the most common way of playing a E chord.

Other Ways To Play An E major Chord on Guitar: Barre Chords

There is more than one way of playing virtually every guitar chord! Below, we’ll find out some other ways of playing a E chord.

You can also use barre chords (also called bar chords) to play an E major chord.

Barre chords can be moved up and down the guitar neck to play different chords.

Use the finger positions shown in the diagrams below – at the fretboard positions indicated – to play E chords.

This is another way of playing an E chord on guitar. It’s basically the same as an C chord played at open position, but with a bar instead of the open strings.

You can see a photo of this chord being played below.

The next E chord is played at the seventh fret. It’s the barre chord version of the basic A major chord shape played in open position. Played with a barre at the 7th fret, it becomes an E!

You can see it being played in the photo below:

This chord can also be played by laying the 3rd finger (your ‘ring’ finger) over the 4th, 3rd and 2nd strings. It may seem tricky at first, but it’s actually a faster way of playing an E chord once you get used to it!

See the photo below to see how it’s done.

When you see a E chord symbol on sheet music, it means play an E major chord.

If asked to play a E chord guitar players know to play a E major chord, rather than a E minor, or E seventh, or any other kind of E chord.

Notes In a C Major Chord

This is why there is always more than one way to play a chord on guitar.

We hope that you have found this page useful, and can now play an E major chord!