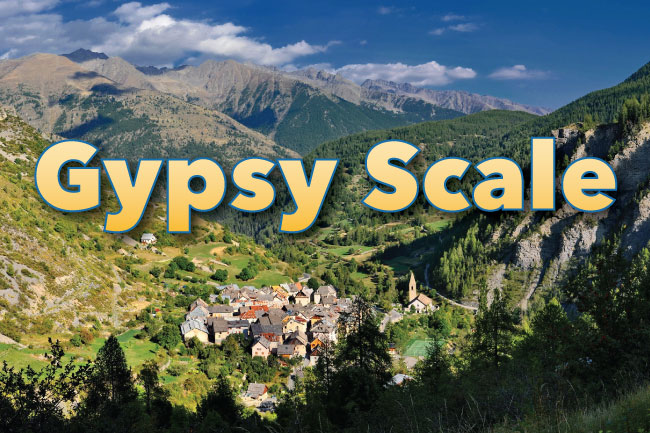 The Gypsy Scale produces a rather beautiful, exotic sound that is seldom heard in western music. On this page you’ll learn how to play the Gypsy scale on guitar (with notation, tab and fretboard diagrams), and you’ll also find out about some similar scales.

You could use this scale when an ‘eastern’ sound is required, or – as its name implies – the Gypsy guitar scale is also reminiscent of Gypsy folk music.

If you study music theory, you’ll know that an augmented 2nd interval is the same as a minor 3rd interval. On guitar this is a 3-fret leap: an interval more often seen in arpeggios than in scales.

The fretboard diagrams below show two ways of playing the scale on guitar, with roots on the sixth and fifth strings:

The Gypsy scale goes by at least two other names: the Double Harmonic Scale, and the Byzantine scale.

To make things more confusing, there are also other scales which go by the name of ‘Gypsy Scale’, these include the Hungarian Gypsy scale (which, strictly, is a mode of the Gypsy scale shown below), and the Spanish Gypsy scale.

Similarities / Relationships With Other Scales

The scale spellings below should clarify this:

If you already know the Phrygian Dominant (many rock and metal players often use this scale), you could simply alter it by playing the natural, rather than flattened seventh.

I hope you enjoy experimenting with this scale. It is a scale that, if you drop it into a solo or composition, is sure to get noticed.

The one note that differentiates it from a Phrygian Dominant scale makes all the difference, making an already characterful scale sound even more exotic.