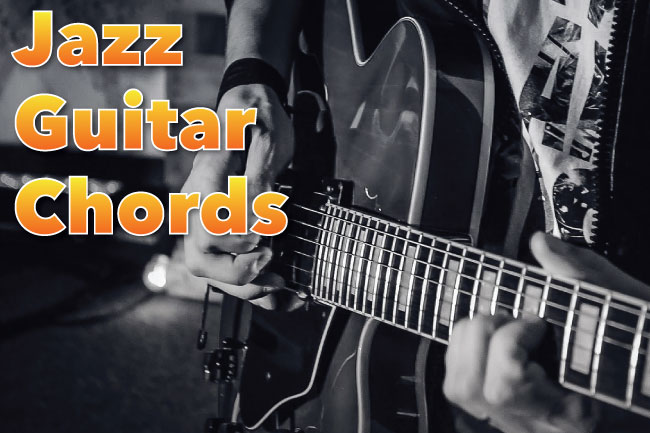 There are literally thousands of jazz guitar chords, but don’t worry: you don’t have to learn them all to start playing jazz.

On this page we’ll show you how jazz guitarists play many types of chord. We’ll start simple, then hit you with some complex ‘altered’ shapes.

Although jazz chord charts can appear bewildering to newcomers, many complicated-looking chords are actually quite easy to play.

Many complex chords can also be substituted with simpler chords. By learning the jazz guitar chords shown below you’ll be able to play any jazz song.

On this page, standard chord symbols are shown in brackets, and information about other chord symbols you might come across is provided in the text.

To get you in the mood, here is some jazz rhythm guitar inspiration (skip if you want to get straight to the chords!):

Major 7, minor 7 and dominant 7 chords appear more frequently in jazz than in rock and pop music. Even if you already know how to play these chords, make sure you can play them quickly and move between them smoothly.

(The root note of the chord is shown with an ‘R’)

You may come across a small triangle being used as a chord symbol. This is shorthand for a major seventh chord.

Minor 7th chords can sometimes be written as a dash followed by a 7, e.g. D-7 for a D minor seventh.

Most guitarists know how to play dominant seventh chords using barre or open chords. However, jazz guitarists nearly always prefer the shapes below, as they are easy to form and can be moved around the neck quickly.

Many jazz chords are extended versions of dominant seventh chords. This means that they contain all of the notes of the standard chord as well as additional notes that create a more interesting jazz sound.

However, many jazz chords have so many notes that it becomes difficult, if not impossible, to play them all in one guitar chord.

In these cases, non-important notes – notes that do not affect the overall sound or purpose of the chord – can be left out. The thirteenth chord shape shown below contains only four notes.

Diminished seventh chords often crop up in jazz chord charts. They can also be written as a small circle followed by a 7.

Diminished chords are unique in that every note they contain can be considered to be the root note.

Minor seventh flat five chords are also called half-diminished chords. Another chord symbol used to identify them is a small circle with a line drawn through it. The shape shown below is the most common way of playing these chords.

Seventh sharp five (7#5) chords are often used in the place of standard dominant seventh chords. Chords with a sharpened fifth note are also called augmented chords, and can be written with a + sign.

Many of the most complicated-sounding jazz guitar chords are altered chords. These are simply dominant seventh chords with one or more additional notes that have either been sharpened or flattened.

For example, a G7b9 chord is a G7 chord with a flat ninth note (Ab) included in the chord.

Whenever you come across a complicated altered chord, remember that if you don’t know the actual chord, you can usually replace it with the standard dominant seventh chord with the same root.

For example, if you can’t remember how to play a G7#9 chord, just play a standard G7 chord.

Many beginner jazz guitarists concentrate on their lead playing, forgetting that having a good chord vocabulary is an important part of jazz guitar.

If you know several ways of playing each chord then you’ll be able to play smooth, flowing rhythm guitar parts. You’ll also be able to incorporate chord soloing into your lead playing.

Learning the jazz guitar chords shown above will give you a great start in jazz rhythm guitar playing.