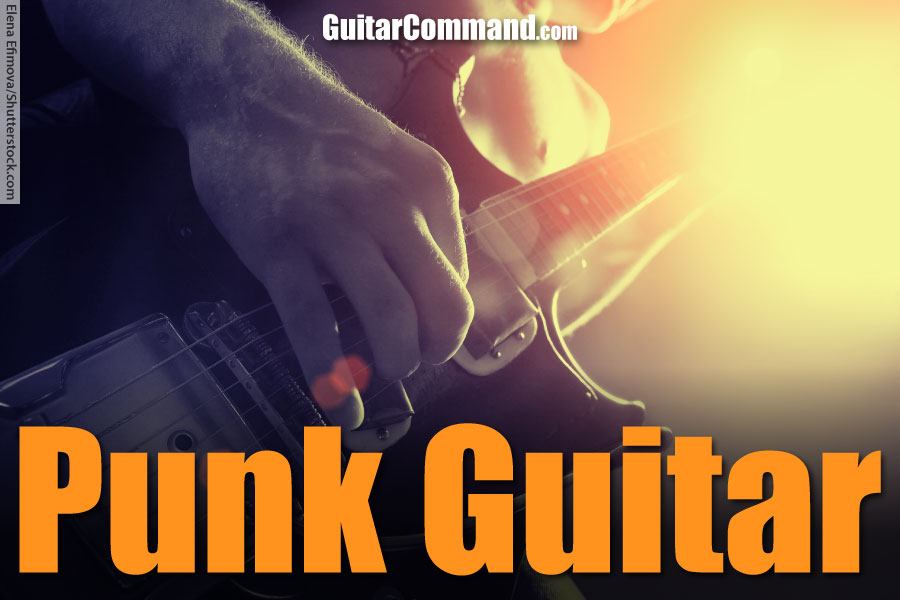 Punk rock’s ethos and brutal simplicity have captured the imagination of music fans ever since the genre exploded into the world’s musical consciousness in the mid-1970s.

Punk isn’t just about the music – although that’s a big part of it – it’s also an attitude: a way of thinking about things, breaking norms and expectations, and being true to yourself.

At its core, punk rock was about returning popular rock music to the man on the street. At a time when the likes of Led Zeppelin, Pink Floyd, Yes, et al were releasing ever-more extravagant concept albums, flying around the world in private jets, and wearing cloaks on stage, punk aimed to return popular music to its accessible, simple, and down-to-earth, roots.

Likewise, the playing techniques and gear used by punk guitarists, both then and now, is typically rooted in more basic, accessible approaches to playing. The chords are simple. Long, virtuosic solos are virtually non-existent. The gear doesn’t have to be either expensive or complicated.

As you’ll see in this article, many of the sounds now associated with punk and its various offshoot subgenres come from what is, essentially, entry-level techniques and entry-level gear.

If you’re looking to dip your toe in the churning, frantic waters of punk rock guitar, you’ve come to the right place…

If you haven’t heard punk guitar before, then do yourself a favor: listen to “Blitzkrieg Bop” by the Ramones. That buzzsaw-like guitar attack, propelled by relentless power chords and a frantic pace, defined punk guitar from the very beginning.

Punk guitar usually sounds aggressive, fast, and brutally simple. It’s the sort of music that kids can play in their garage with their friends.

That does not necessarily mean that punk guitar equates to poor musicianship, or that you need to play badly to be “punk”. It’s simply a alternative approach to the instrument to the (relatively) studious virtuosity of metal or jazz, for example.

As a general rule, playing punk guitar focuses more on rhythm than melody. Most punk bands only have one guitarist, and the power trio reigns supreme as the default format for punk rock.

As a result, punk guitarists tend to fall within the rhythm section of their band, locking in with the drummer and bass player to create a single, powerful wall of sound.

This simple, powerful approach influenced a lot of later music, including thrash metal and grunge. Although punk’s ratty, dirty edge might make it seem worlds apart from the classic rock and roll rhythm, it’s very close musically to the likes of Buddy Holly and Elvis Presley.

A punk rock band’s rhythm section should form a close, cohesive unit, capable of blasting out a strong, consistent backbeat.

Chief among punk guitarists is Johnny Ramone, whose uncompromising, relentless guitar attack influenced generations of players across all genres.

The Sex Pistols’ axeman Steve Jones took Chuck Berry’s double stops and chord-based approach to rock and roll guitar and turned it up to eleven. Jones is arguably one of the best rhythm guitar players in rock history, as evident on the track “Pretty Vacant”.

Greg Ginn, leader of American hardcore punk band Black Flag, is one of the most famous punk guitarists. Ginn is known for his brutal, raw sound, produced, surprisingly, by a solid state amp played extremely loud.

Although Green Day ascended to arena-rock status decades ago, their frontman Billie Joe Armstrong remains dedicated to keeping punk alive. His playing channels Johnny Ramone’s fury via Malcolm Young’s push-pull approach to guitar. Is there any greater punk song of the 21st century than “American Idiot”?

Fugazi’s Ian MacKaye lived and breathed the DIY aesthetic that spurred the American hardcore boom of the 1980s. MacKaye, along with fellow Fugazi axeman Guy Pucciotto unleashed an unpretentious, aggressive brand of punk rock that has remained staunchly unchanged over the decades.

Fugazi were a phenomenally influential band, famously never charging more than $5 for a ticket to their gigs. The feral energy and community spirit of Fugazi is captured in this performance of “Waiting Room”.

The Pixies’ sound is rooted in the punk tradition, but in a more evolved state. Formed in the mid-eighties, and achieving underground success in the nineties, Pixies combined the rawness of punk in its heyday with more nuanced songwriting.

Simplicity is king when it comes to punk guitar. Fortunately, you don’t need to look at expensive boutique amps or vintage guitars for punk rock.

An electric guitar that you enjoy playing, and an amp capable of overdrive (or a relatively clean amp with a reliable overdrive pedal), are all you really need to start cranking out power chords.

Your choice of guitar should be something reliable and simple. Steve Jones of the Sex Pistols used a Les Paul Custom, which feels a little antithetical to the punk ethos… until you learn that he stole it from David Bowie! (Of course, we don’t condone stealing gear!) If you want to channel some of his thick, pulverizing tone, a humbucker-equipped guitar is probably best.

Any Les Paul-style guitar, from Gibson, Epiphone, or any of the Japanese copies like Tokai or Greco would do a great job. Gibson SGs, too, have an appealing simplicity to their tone.

Realistically, you want a guitar equipped with pickups powerful enough to push your amp into overdrive. Guitars with humbuckers will do a great job of this, particularly if you’re playing in a single-guitar ensemble where you need a thicker, denser tone.

If, however, two pickups seems like too many, you might want to look at the Gibson’s “Junior” range of instruments. Initially planned as a cheap entry-level model for beginner guitarists, the brutal simplicity, powerful tone, and indestructible construction of these guitars made them very popular among punk players.

The key difference here is that Junior series guitars, such as the Les Paul and SGJunior, feature a solitary P-90 pickup in the bridge position.

P-90s have a sharper, more articulate tone than humbuckers, but they lack the thinness and sparkle of Fender’s single-coil pickups. They’re widely considered a best-of-both-worlds pickup. They have enough chug for your rhythm playing, and enough bite for power chords and riffs.

Johnny Ramone played a Mosrite Ventures II. These guitars were equipped with slab bar magnet pickups, but by all accounts, Ramone used a DiMarzio FS-1 single coil pickup in the neck position.

Another classic punk guitar is the Fender Telecaster. The Telecaster was famously wielded by Joe Strummer of the Clash. It’s another single-coil-equipped guitar with more snap and sparkle than a Gibson guitar.

For your choice of amp, tube amplifiers are generally better than solid state for their warmer, thicker tone. Punk rock typically uses a lot of poweramp saturation, rather than fizzy preamp distortion, so you want an amp that tends to drive at lower volumes.

Many Marshall models (like the excellent Studio Vintage and Studio Classic series) will accomplish this. Fender’s Bassbreaker series is also great for punk guitar.

Avoid expensive multi-gain-staged amps like some higher-end Marshalls or boutique metal amps with more controls than the Starship Enterprise.

As for guitar pedals, you really only need a tuner. If your amp is more clean than dirty, a reliable, inexpensive overdrive like the Ibanez Tube Screamer or Boss Super Overdrive should come in handy. Distortions and fuzz with excessive gain can obscure the note definition in your rhythm playing, so be careful with the amount of gain you use in your rig.

Other effects, like modulation and echo, although rare in punk, are not totally unheard of. You might want to consider a wah pedal, as Stooges axeman Ron Asheton used on Raw Power.

Punk guitar relies heavily on rhythm guitar techniques. You’ll want to get to grips with your palm muting technique, using the blade of your palm on the strings near the bridge to achieve a thudding, chugging tone. This is often used to achieve a staccato effect.

Downpicking is also critical to punk guitar playing. Johnny Ramone used downpicking almost exclusively in his guitar playing, and the technique is largely responsible for his relentless, aggressive tone.

Punk guitarists also use power chords more heavily than any other type. Power chords consist simply of the root note, fifth and octave, and this “shape” can be moved up and down the fretboard.

This shape can be moved anywhere on the fretboard with your root of the E or A strings. For extra texture, learn to use variations on the power chord. You could play only the root and fifth, or just play in octaves, leaving the fifth out.

You don’t even need to master barre chords to play punk guitar; open chords provide the power and fullness of sound that you might need in a three-piece situation.

The downside of playing open chords is the lack of control; you can’t mute them with the left hand, and you can’t slide them up and down the neck to make chordal riffs.

That said, strumming open chords can be a great way of creating an “instant” accompaniment for a song, which may be useful if you’re also the singer.