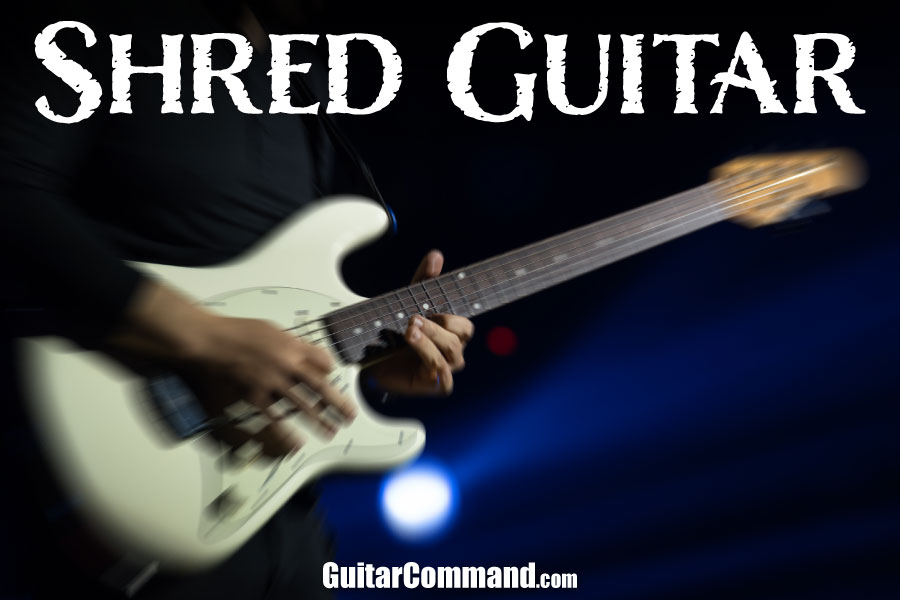 A complete guide to shred guitar – what it is, the playing techniques involved, and examples of shred guitarists and their music.

So, you want to shred? The high speed, high gain, and laser precision has plenty of appeal, and generations of guitar players have spent hours upon hours honing their skills trying to match the speed and precision of shred guitar masters such as Steve Vai and Paul Gilbert.

The incredible speed and musicianship of shred guitar is a surefire way to impress your fellow guitarists. Having a couple of go-to shred licks up your sleeve is a great way to show off your musical chops in an audition.

If you’re new to the world of shred guitar, in this article we’ll walk you through what exactly shred guitar is, some vital techniques, and some of the great shred players.

What is Shred Guitar?

Shredding typically appeals more to musicians than to the general public, because at least some level of familiarity with the playing techniques involved is required to appreciate how difficult they are to master.

Shred guitar is most heavily associated with metal, particularly the metal subgenres of the 80s. Many of shred guitar’s biggest names came to prominence during this time, including Randy Rhoads, Paul Gilbert, and Yngwie Malmsteen.

For a short while, shredding was prominently featured in the pop-metal radio rock of the era. Many of the neon-and-hairspray Sunset Strip hair metal acts employed shredding techniques inspired by the incendiary lead work of Eddie Van Halen.

Shred guitar demands a high level of musicianship and dedication to the instrument. Building up to shredding speed takes time and lots of practice.

Playing shred guitar requires command of several very difficult playing techniques. Although this is by no means a comprehensive list, the techniques most commonly employed by shred guitar players include rapid alternate picking, sweep picking, and finger tapping.

Building your shredding technique will require you to diligently practice these techniques, starting at a slower tempo, so you can play each passage cleanly. Slowly bringing up your speed in increments will allow you to improve your playing speed and make your high-speed playing sound clear and pleasant.

Alternate picking is simply the technique of applying a strict up-down motion when picking the strings. Strict alternate picking requires every note to be picked; there’s no “cheating” with hammer-ons or pull-offs!

Very fast alternate pickers are able to effortlessly deliver flurries of notes within a single second at high tempos.

You can improve your alternate picking by playing scales up and down the guitar neck to a metronome, and measuring how fast you can play.

When a speed feels challenging, stick to that tempo until you can comfortably play at that speed. Then speed your metronome up and take on your next challenge.

For an example of rapid-fire alternate picking, check out Randy Rhoads’ solo in this live performance of “Mr. Crowley”. Rhoads uses this picking technique to deliver unbelievably fast flurries of notes in the guitar solo at about 2.15.

Made popular by Swedish guitar wizard Yngwie Malmsteen, sweep picking is a very impressive technique that requires the player to play single notes on consecutive strings in a single “sweeping” motion of the pick, using the fretting hand to ensure that the notes are fluid and musical in their sound. Your left and right hands must work in perfect synchronization to pull off this technique.

Sweeping allows guitar players to play individual notes of a chord or the key tones of said chord one by one at high speed, quickly ascending and descending through the scale. Sweeping is a difficult technique to master, but pulling it off at the right time can take your solos from good to great.

You can see Malmsteen displaying his famous sweeping technique in this video.

Tapping was made famous at first by Eddie Van Halen. Check out the intro from “Hot For Teacher” for an example of how tapping a note on the fretboard with a finger from your picking hand can sound.

Fret tapping is not a particularly difficult technique to pull off, but mastering it requires a deep understanding of scales, intervals, and chord theory.

Typically, fret tapping involves playing two or more notes with the fretting hand and then hammering any additional notes with the picking hand. Tapping looks very impressive and is often used by shredders to give their solos a wide, spacious sound. It allows players to cover greater distances between notes than they would be able to while using a single hand.

Most of the most famous shredders rose to fame in the 1980s at the commercial peak of hard rock and heavy metal. Guitar playing in popular music from the 90s onwards began to veer towards the minimalist stylings of grunge musicians and the pluck and twang of folk and country styles. However, metal players kept shredding alive, consistently breaking new ground.

We’ve listed some of the most famous shred guitarists below, including examples of their best-known work.

If you haven’t heard “Eruption” from Van Halen’s eponymous debut album, do yourself a favor and listen to it immediately; it’s one of the most influential of all electric guitar recordings!

Eddie Van Halen was the first popular guitar player in hard rock or metal to earn the “shred” title. Listening to “Eruption”, you’ll hear Van Halen’s impeccable picking technique, his extensive use of tapping and hammer-ons, and his distinctive classical-influenced approach to soloing.

Van Halen’s contribution to shred guitar extended to his pioneering use of a locking whammy bar for abusive dive bombs and his continual innovation in guitar building techniques. Even Van Halen’s thick, chunky, high-gain guitar tone was imitated by the legions of guitar players who followed him.

Although the late, great Randy Rhoads only recorded two albums with Ozzy Osbourne, they remain two of the most impressive demonstrations of guitar shredding ever to be put to record. Rhoads’ use of scales, particularly the harmonic minor, was a major influence on the shred movement that defined 80s metal guitar.

Rhoads was particularly fond of rapid alternate picked passages, but his legato technique was equally impressive and used to great aplomb across many solos. Check out the solo from “Crazy Train” for an example.

In 1985, singer David Lee Roth left Van Halen and set out on a solo career. After parting company with a guitarist then at the bleeding edge of lead guitar technique, David Lee Roth needed an adequate replacement, and called young shred guitar virtuoso Steve Vai.

Vai had previously worked with Frank Zappa and Alcatrazz, and had also released a solo album, Flex-Able. Two hugely-successful albums with David Lee Roth cemented Vai’s position as one of the world’s great electric guitarists, and set Vai on a long and successful career.

Paul Gilbert is arguably the foremost player when it comes to rapid alternate picking. He initially rose to prominence with all-shredder supergroup Mr. Big, epitomizing the big-haired shred movement of the era.

Onstage, Gilbert wowed audiences by playing shred guitar with a pick attached to a drill.

Mr. Big’s biggest hit was the tender acoustic ballad “To Be With You”, but the band delivered ferocious, shred- rock, too. Check out this live performance, which features Gilbert’s drill solo.

Yngwie Malmsteen is famous for his incredible, classically-influenced sweep picking. Malmsteen’s flamboyant, neo-classical shred stylings managed to turn heads in a decade ruled by the likes of Van Halen and Vai.

Malmsteen’s approach to the guitar was markedly different from those of his peers, who tended to incorporate primarily the blues-rock influences of the 1970s in their playing.

Malmsteen eschewed the Page and Clapton stylings of his contemporaries in favor of extended baroque passages that owed more to Bach and Paganini than to Jimi Hendrix.

For evidence, check out Malmsteen playing with an orchestra, featuring his standard white Stratocaster and puffy shirt.

No guitar player has dragged shred guitar kicking and screaming into the 21st century quite like Polyphia’s maestro Tim Henson.

Henson took his command of classic shred guitar techniques, combined it with his love of rap music, and set about making guitar cool for a generation of kids for whom heavy metal is music for dinosaurs.

Henson uses a variety of techniques in his playing, but he is best known for his sweeping technique and use of harmonics when constructing melodies.

Henson also makes great use of jazz-influenced extended chords, often relying on seventh chords to construct his fluid, fiery lead lines. Check out the track “40oz” for an example of Henson’s ultra-modern technique.

We hope that this brief introduction to shred guitar has inspired you to hone your picking and sweeping skills and get shredding! Even if you don’t want to become an out and out shredder, improving your speed and fretboard dexterity will reap rewards, whatever style of music you play.

How To Play Metal Guitar: A Complete Beginner’s Guide

Metal Amp Settings – How To Get A Killer Metal Sound

Guitar Pedals For Metal – The Pedals You Need For Metal