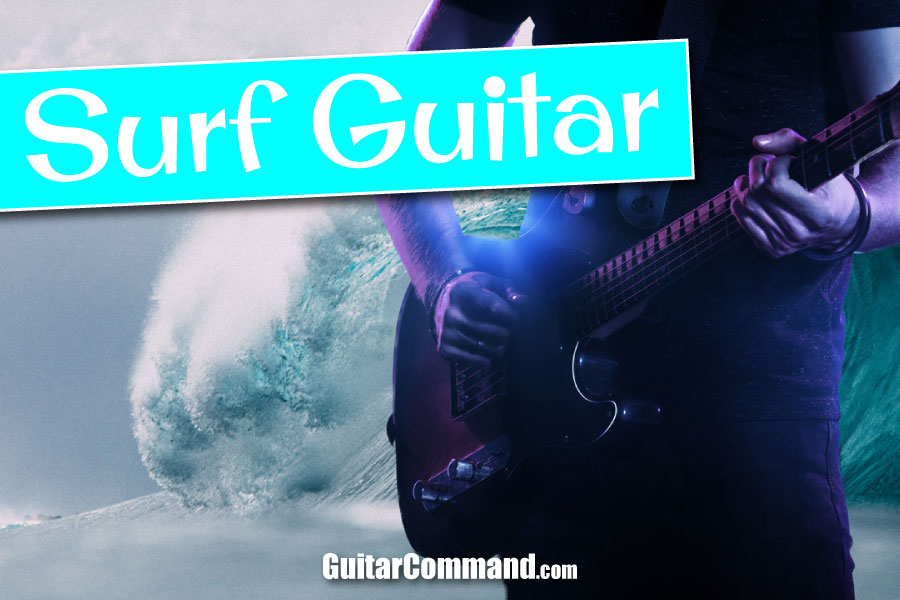 A complete guide to surf guitar, covering: history, artists, classic tracks, and the gear and techniques you’ll need to get the classic surf guitar sound.

What Is Surf Guitar

The term “surf guitar” refers either to the broader genre of “surf music” or to the sound and style of guitar playing commonly associated with that music.

Soon afterwards, acts like the Beach Boys, who combined the surf guitar sound with sweet, densely layered vocal harmonies and lyrics about surfing and the surfing lifestyle, began to emerge.

The distinctive surf guitar sound arose out of a combination factors, including the relatively small range of gear available to guitarists of the time, and the use of a standard set of surf guitar playing techniques (which we’ll explore further down the page).

This, combined with a compositional style that put catchy melodies and licks to the forefront, helped to produce the classic reverb-soaked surf guitar sound that, even today, evokes the thrilling experience of surfing and the sound of crashing waves along the California coastline.

You might not have heard of surf guitar, but odds are you’re familiar with some surf guitar music. The James Bond theme, for example, makes great use of the surf guitar sound.

Dick Dale’s “Misirlou”, one of the most famous surf guitar tracks, featured heavily in Quentin Tarantino’s Pulp Fiction, and was later sampled by the Black-Eyed Peas for their track “Pump It”.

Surf guitar players used a few signature techniques to give surf music its distinctive sound. Chief among these was rapid tremolo picking. If you check out Dick Dale’s “Misirlou”, you’ll notice his extremely fast picking of a single note within the tune’s main melody.

Another feature of surf music was the use of Middle Eastern modes, perhaps the first introduction of the Phrygian mode to popular music in the 20th century.

You can get some great eastern sounds using the scales on this page: Arabic Guitar Scale

As a general rule, surf guitar players pushed their amplifiers about as hard as they could go, in terms of both volume and reverb; Fender’s spring reverb represented the cutting edge of amplifier innovation at the time.

Back in the 1950s and early 1960s, there was no heavy metal, and no high-gain amplifiers to provide feedback. Surf guitar players simply had to push their amplifiers as hard as they could with volume and playing ferocity.

Easily the best-known surf guitarist is American guitarist Dick Dale, aka the “King of Surf Guitar”.

Dick Dale’s use of non-Western scales in his playing and his aggressive playing style made Dale an instant standout in the rockabilly scene of the early 1950s. His breakout instrumental track, “Let’s Go Trippin”, was one of the first hit surf guitar singles.

Dale actually credited his Lebanese-American relatives with introducing him to the song, which he played up and down a single string, using his jaw-dropping tremolo picking technique.

The Beach Boys recorded a version of “Misirlou” later on, cementing its place as a surf rock classic. The use of the track as a key part of the soundtrack of the Tarantino film “Pulp Fiction” introduced Dick Dale – and the surf guitar sound – to millions of film-goers worldwide.

A key part of Dick Dale’s thunderous tone was how he played guitar. A left-handed player, Dale simply played right-handed guitars upside down, without even re-stringing them, as Jimi Hendrix did. Accordingly, Dick Dale’s Stratocasters had the thickest strings at the bottom of the guitar, and the thinnest strings at the top, closest to his face. This means that his use of many guitar techniques and voicings is inverted, perhaps influencing his choice to use so many non-Western melodic choices in his compositions.

The man himself can be seen showcasing his technique in this video.

Another classic surf guitar track is “Pipeline” by the Chantays, which has a distinctive “drippy” reverb sound. Like later heavy metal and hard rock, this track makes great use of the minor scale, occasionally dipping into harmonic minor.

The Surfaris, with guitarist Jim Fuller, were another classic surf guitar act. Fuller used tremolo picking less blatantly than many of his surf contemporaries, relying heavily on double stops and a warbling vibrato effect to achieve the same atmosphere in his music. The Surfaris’ signature track, “Wipe Out”, is famous largely for its impressive drum solo and signature riff.

Another iconic surf-rock group, The Slacktones, made use of more dynamic variation in their crashing, pulverizing surf-rock sound. This is apparent on “The Bells of St Kahuna” with its distinctive riff and chord voicings. The guitar’s reverb-drenched tone and frantic use of wide intervals, often relying on drones and hybrid picking in addition to the classic tremolo-picked surf guitar technique.

How To Get A Surf Guitar Sound

Fortunately for modern players looking to replicate the classic surf guitar sound, this genre of music comes from an era before effects units were as widespread and varied as they are today. Therefore, all you really need is the equivalent of the gear available to players in the 1950s, namely an electric guitar and an amp (ideally one with a reverb).

Below, we outline the gear and techniques you’ll need in order to play surf guitar.

While the individual guitars used by surf players varied somewhat, the consensus is very clearly to use a guitar with single-coil pickups.

In the early 1950s, Fender guitars were at the cutting edge of the rock and roll boom, with their radical shapes and retro-futuristic color options.

For surf guitar, a Fender Stratocaster or Jaguar would probably be best, although the deeper, throatier sound of a Jazzmaster might also lend itself well to the music.

The important thing is single-coil pickups with plenty of snap, sparkle, and note definition. Humbuckers are generally too dark and fat-sounding for surf guitar.

Strings with a heavier gauge are also well-suited to the aggressive, powerful playing style of surf guitar.

The next piece of the surf guitar gear puzzle is the amp. You want a very loud, very clean-sounding amplifier. Back in the 1950s, that meant using a Fender. Dick Dale used a Fender Showman with a fifteen-watt speaker, for example.

You may want to avoid British-voiced amplifiers such as Marshall, Vox, and Orange for surf music, as their tendency to break up into overdrive at high volume is detrimental to the glassy, clean tone you want for surf guitar. Any of Fender’s classic models with plenty of clean headroom (that is, the ability to play at high volume without saturating) are great for surf music.

In 1961, Fender introduced a stand-alone reverb unit, known simply as the Fender Reverb Unit (model no. 6G15). With a box-like, rectangular build, the Fender Reverb Unit resembled a small amp, and featured a vacuum tube preamp and a spring reverb. The unit, which was produced in collaboration with Dick Dale, was used heavily by the guitarist on many of his classic recordings. This unit has a distinctive “drippy” reverb tone.

Although era-accurate gear is always fun to use, you can get very close to the classic surf sound without spending an arm and a leg on vintage Fender reverb units. Any spring reverb, or vintage-voiced reverb (such as Fender’s line of spring reverb pedals) should do.

Be wary to avoid 80s-style digital reverb, which has a colder, drier tone. You really want the warm, wet sound of spring reverb. Consider the tone on “Misirlou” compared to the reverb you can hear on “Purple Rain”. Spring reverb, not digital reverb, is the key to this guitar tone.

Surf guitarists tended not to employ legato techniques or palm-muted “chugging”. But rapid alternate picking, double stops, and hybrid picking were all used to great effect, as were minor and modal scales.

The most important technique in surf guitar is tremolo picking. This requires the player to rapidly pick a single note on a single string, using an up-down alternate picking motion. This is an extremely fast, staccato technique. Most surf players followed Dick Dale’s lead in using tremolo picking as a primary feature of their playing.

Many surf guitar players eschewed conventional chord voicings in favor of double stops and hybrid picking. That involved playing jazzy inversions across the upper strings in contrast to the deep, authoritative alternate picked lines of a surf tune’s hook.

Hybrid picking involves playing one string with the pick, and another (or more) with the fingers of the picking hand. Double stopping is simply playing two strings at once, usually to emphasize key tones within a chord.

The final technique heavily used by surf guitarists is more a question of note choice. Typically, surf guitar players used minor scales, rather than the major scale that was more common in rock and roll of the time.

Flat thirds, sixths, and sevenths were common note choices for surf players. Dick Dale would often use Middle Eastern and Mexican scales in his music. To accomplish this effect yourself, familiarize yourself with the Phrygian and harmonic minor scales.