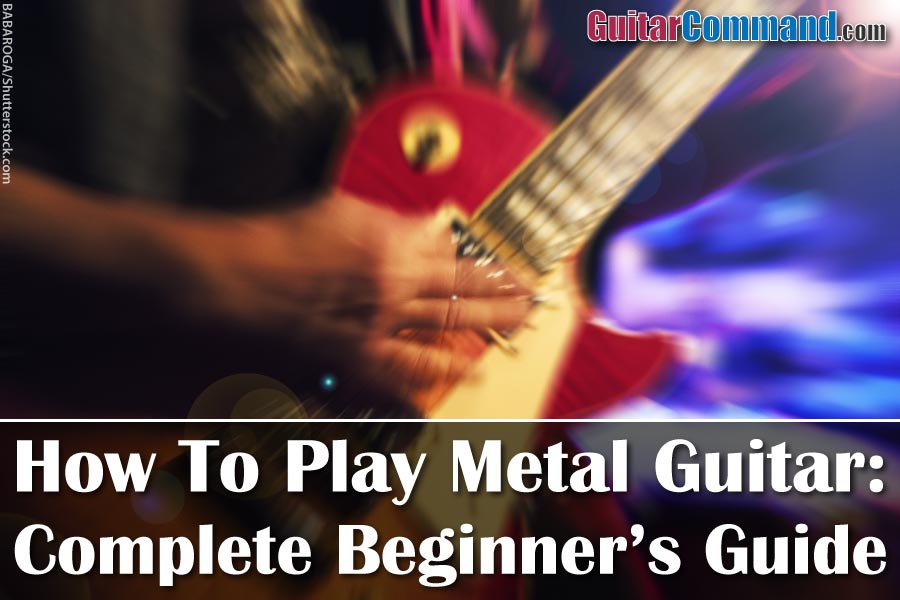 How To Play Metal Guitar

On this page is a complete guide on how to play metal guitar, featuring the gear you need and the techniques you need to learn.

Ah, heavy metal. As Rolling Stone once put it, “it’s loud, it’s ugly, and it won’t go away”. You won’t hear crushing power chords and frenzied solos on mainstream radio, but metal remains one of the biggest, and fastest-growing, genres of music on the planet.

You need look no further than the colossal attendance records set by metal festivals to understand the enduring appeal of popular music’s most maligned genre.

Unlike many other genres of music – pop and country, for example – metal fans are often guitar players themselves. Perhaps it’s the undeniable appeal of the genre’s guitar histrionics, or the true community vibe of metal shows.

No matter the reason, and no matter your guitar playing pedigree, we’ve assembled this awesome how-to guide on how to play metal guitar.

Obviously, as with most electric guitar playing, you’re going to want to make sure you have a reliable lead to connect the guitar to the amp, a couple of guitar picks, and a strap for standing while you’re playing. If you aren’t getting enough distortion from your amplifier, you’re going to need a distortion or overdrive pedal to access the tones you want.

The Best Guitars For Metal

Generally speaking, there are two kinds of pickups on an electric guitar. (In reality, there are as many variations as there are notes in an Yngwie Malmsteen solo, but we’re painting with broad strokes here!)

Single-coil pickups have a thinner, brighter tone. Usually, we associate this sound with pop, country, and rock. One of the best examples of the classic single-coil sound is The Dire Straits’ “Sultans of Swing”. That clean, bright tone is not what you want for metal.

Instead, metal players use guitars equipped with humbuckers. The humbucker’s fatter, broader tone handles distortion far better, and won’t give a hissing, fizzing “hum” under high gain like a single-coil guitar. In fact, that’s how they got the name.

Humbuckers can be either active (powered by an additional battery) or passive. Active pickups are popular among metal players, particularly in the more extreme subgenres like thrash and death metal.

However, you don’t need active humbuckers, especially if you’re just starting out, however. Any decent humbucker-equipped guitar should do the trick.

Metal guitarists typically use traditional, Gibson SG and Les Paul-style guitars, or humbucker-equipped “superstrat”-style guitars. However, there are always exceptions!

The Best Amplifiers For Metal

Simply put, turning up the gain will increase the output of the guitar, and give you a more distorted tone. This can also increase the volume, so having a master volume to reduce your overall decibel level without lowering the level of distortion is ideal for practicing and keeping your neighbors happy.

You can use guitar software like the instrument package in Garageband or a similar program if you have an interface to connect the guitar to the computer.

The Best Pedals For Metal

If you aren’t getting enough distortion with a simple guitar-and-amp setup, you’ll need a distortion pedal.

The world of pedals is very deep and very broad, so we’ll keep it simple. Boss makes two industry-standard distortion pedals: the Super Overdrive and the DS-2. Both are relatively inexpensive and will provide the dirt and grit you’ll need to play metal guitar. If your tastes run to thrash metal, the Boss MT-2 takes things even further! 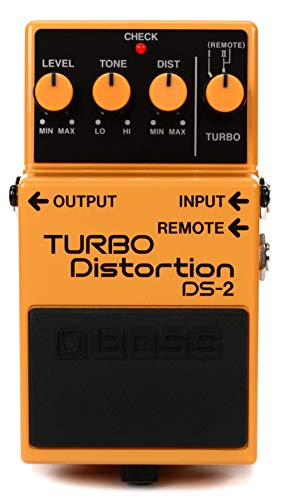 As you improve and go deeper into the metal rabbit-hole, you may want to upgrade or alter some of this setup, but if you’re just dipping your toes into playing metal, this will be more than enough to get you started.

Metal guitar, like jazz or blues, has a very distinctive sound that comes largely from the repertoire of techniques associated with the genre. While you can theoretically apply pretty much any technique to your performance, metal guitar has a raft of techniques you’ll want to master so you can sound just like the pros on your favorite recordings.

We’ve broken these up into techniques appropriate to beginners, intermediate players, and advanced players. No matter where you are on your journey, however, these are all great tricks to have in your arsenal!

Let’s start with the basics.

Power chords consist simply of the root note in a scale and its fifth. Typically, you play them on the E, A, and D strings. At higher registers, they can sound a little thin.

You can play any chord as a power chord. Simply start with your root note – say, G – and find it on the fretboard. In this example, play the G note on the third fret of your E string. Now, go one string up – that’s to the A string – and two frets up, so you’re playing the 5th fret of the A string at the same time. Use your index finger for the E string note, and your ring finger or your pinky for the A string note. Strum them together, and you’ve played your first power chord! You can try this on the A string, too. Repeat the process – find the root, and play the fifth one string and two frets up – to play power chords anywhere on the neck.

You can find out how to play power chords on this page: Power Chords

Palm muting is a really cool technique that dampens the sound of your strings without totally choking them out. It produces a duller, more percussive sound. Arguably the unquestioned king of palm-muted metal guitar is Metallica’s James Hetfield. Think of the rapid-fire signature riff from “Master of Puppets”. Palm muting requires you to gently apply just enough pressure with the palm of your hand on the string you’re playing near the bridge.  There should be enough pressure to produce a percussive muted tone without totally silencing the guitar.

Learn your scales. Everything on guitar sounds better if you know your scales. For metal, even knowing the basic major and minor scales will make your chords, chord progressions, and later on your solos sound much better. A lot of metal songs are built around a minor third – such as Black Sabbath’s “Ironman” – although knowing how to incorporate both major and minor keys into your playing will be very valuable. Iron Maiden are particularly well known for this.

You can see a selection of scales used in heavy metal on this page: Metal Guitar Scales

Alternate Picking is one of the most basic tricks in the book. It requires you to play using a strict up-down-up-down motion. The faster you can do it, the better you’ll be – as long as you’re keeping time. Play your riffs, chords, and lead lines with strict alternate picking, until you get good enough for intermediate techniques.

Downpicking, as the name suggests, is picking only using downstrokes. This produces a heavier, more aggressive sound. We mentioned James Hetfield before – Metallica’s “Master of Puppets” is perhaps one of the finest displays of downpicking ever recorded. If you can unleash rapid-fire downpicked riffs, you’ll be a metal guitar god in no time

Harmonics are more advanced, but we’ll be brief here. Any note is comprised of a whole array of tones and frequencies. Harmonics isolate particular frequencies. Their airy, higher-pitched sound can contrast beautifully against the more aggressive palm-muted riffage in a metal song. Pinch harmonics – created by lightly flicking the string with the side of your thumb while picking – are a particularly common use of this technique. Think of Zakk Wylde or Dimebag Darrells feral, squealing tones when you think of harmonics.

Hammer-ons, pull-offs, and tapping are all part of the same arsenal. They allow you to play faster by playing notes without picking them.

To perform a hammer-on, fret and pick a note anywhere on the guitar using your index finger, then quickly, without picking it, “hammer” your ring finger into the fret two frets up on the same string. The pull-off is this technique in reverse, where you play a higher note and don’t pick the second note. The intro to Wolfmother’s “Joker and the Thief” was all played using hammer-ons.

Tapping, as popularized by Edward Van Halen on “Eruption”, is like doing the hammer-on but you use a finger from your right hand to play an extra note. It’s a flashy, but surprisingly easy, technique to pull off.

Economy picking incorporates alternate picking and requires precise, high-level control of your picking motion. It requires you to use alternate picking for notes on a single string, and always use a down stroke to move to a string closer to the treble end, and an upstroke for a string closer to the bass end of the guitar. It’s primarily used in playing solos, and can be devastatingly effective.

Sweep picking is like economy picking’s suave older brother. You play a broken chord – that is, one note at a time – across three, four, five, or even all six of the guitar’s strings, using only a single stroke of the guitar from one end to the next. You simply “sweep” the pick across the strings to produce a quick succession of notes, as popularized by Yngwie Malmsteen. This is a very advanced technique that will take time to build up, and is mostly used for lead lines and solos.

Improvisation, borrowed from jazz but used frequently in metal, requires you to have a good working understanding of music theory (that’s where the scales are handy) and your variety of techniques. Improvising is a lifelong skill, and although you can start improvising very early, we’ve included it here as an advanced technique because great improvising is truly the stuff of guitar’s greatest players.

How To Play Metal On Guitar: Conclusion

We hope that the information on this page has been useful, and that you now have a clearer idea of how to achieve your aim of playing metal guitar.

Feel free to ask any questions you may have in the comments section below; we’d be only too happy to help launch a new metal guitarist’s career!

Check out these pages for more information