Thinking of learning how to play jazz guitar? Get off to the right start with this concise guide that features all of the key concepts in jazz guitar playing. We tell you how playing jazz differs from playing rock and blues. We’ll also share information on jazz guitar playing techniques, jazz standards, comping, substitutions, ii V I’s and more …

How To Play Jazz Guitar – Introduction 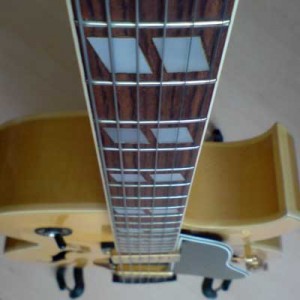 Learning how to play jazz guitar is not as hard as it is sometimes made out to be. Yes, you’ll need to be dedicated, and perhaps learn a little theory, but if you can play blues then you’re already halfway there.

Jazz is a language that has evolved out of the blues, folk and popular music. Like any language, one has to listen to it and spend time speaking it in order to learn it. Doing so is just as important as studying the theory.

In musical terms, this means one should play with others, become intimate with the ‘standards‘ (famous tunes used as a basis for improvisation) and listen to the great jazz recordings. Playing with, and learning from, other jazz musicians is more beneficial than learning countless scales and chords. Jazz solos can be played using just blues and major scales – substitutions, altered scales, chord-soloing, etc. can all come later.

Musicians with a blues or rock background wishing to learn how to play jazz guitar will have a head start on those with a classical background. Rock / blues players are already improvisors (a great definition of improvisation is ‘playing music at the same time as composing it’), and also in following chord charts and making up their own rhythm accompaniments.

In most blues / rock / popular music the key (or tonal centre) stays fairly constant, perhaps changing for a chorus or middle eight. In jazz, the key often changes continually throughout the piece. This requires the improviser to use different scales or arpeggios as the tonal centre changes. Most key changes are introduced by ii V I chords – see below for more on these. Following the chord changes is the essence of much jazz improvisation.

How To Play Jazz Guitar – Start To Play ‘Vertically’.

Jazz guitarists often base their improvisation on arpeggios rather than scales. This is known as playing ‘vertically‘ rather than ‘horizontally’. Learn some arpeggio shapes (e.g. major, major 7, dominant 7, dominant 9, minor 7, etc.) and practise playing over a jazz sequence using just arpeggios. If you are used to playing over rock sequences using just one pentatonic minor scale then this will instantly make your playing sound more like jazz.

As you learn how to play jazz guitar, you will hear much about the importance of ii V I changes. This is because they are fundamental to most jazz music (although perhaps not quite so much in fusion and modal jazz). ii V I changes introduce new tonal centres, or reinforce the current key, and are a constituent part of most jazz songs. You should learn to both recognise the ii V I changes as they occur, and how to play over them.

A ii V I is a group of three chords. The I is the new tonal centre and the ii and V act to prepare for the new key. If a song previously in D major were to modulate to C major then the ii chord would be a Dm (usually a Dm7), and the V would be a G dominant seventh chord. ii V Is are not marked as such – on a chord sheet the above change would be shown as | D | D | Dm7 G7 | C |. It is up to the improviser to see that a key change is taking place and play accordingly.

How To Play Jazz Guitar – Learn some ii V I licks, and other common changes by rote.

Build up a good jazz lick vocabulary. This may seem counter-productive in music that is largely improvisational in nature, but in actual fact having licks and riffs at ones disposal, that one can not only fall back on, but also alter and link together as necessary, is an important part of playing jazz guitar. Learn some be-bop licks for ii V I changes and single chords and have them ready to go whenever you need them!

Learning standards is essential in learning how to play jazz guitar. They are the foundations over which your improvisations will be built. Knowing them will enable you to play with other jazz musicians.

The best jazz standards to learn (to begin with) are:

Comping is short for ‘accompanying’, and jazz guitar is not all about playing lead lines. When comping, jazz guitarists are still improvising, often by adding extra notes to the written chords, or substituting them completely with new ones. For example, Jazz guitarists rarely play a major chord without adding the major seventh or another note such as the sixth or ninth. Ninths, elevenths and thirteenths are routinely added to dominant seventh chords, as well as altered notes such as sharp / flat fives. Walking bass lines can also add extra interest to a chord sequence. Jazz chords often omit non-essential notes so that they can be changed at speed.

Much of the sound of jazz is created by the use of notes that are not contained in the chords (or in the scale suggested by the chord sequence). These notes form the tensions and releases that create interesting jazz lines. To create these tensions, jazz musicians often use ‘substitutions‘. This involves substituting the written chord with a different one (or using a scale or arpeggio that suggests a chord other than the one written). Substitutions produce a more interesting, tension-laden sound. A basic substitution would be to use an Em7 arpeggio over a Cma7 chord. The Em7 adds a D note which is the ninth of the C chord and may add some interest in the line. Other substitutions are more complex, adding altered notes and going completely ‘outside‘ (another common jazz term!) of the original chords. 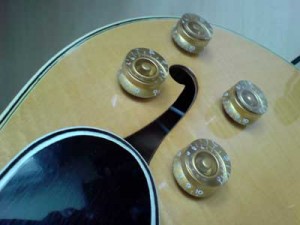 To Do – Learn Jazz Theory

Learn about how chords are constructed, about diatonic chords and non-diatonic chords, what substitutions are and how they work. Experiment with everything that you learn and build up your jazz vocabulary as you go.

Learn altered, whole-tone and diminished scales. Get some licks together that incorporate altered tones and have them ready to play over dominant chords. You will have left your rock and blues playing friends far behind!

( … get inside the minds of the great jazz guitarists!)

Making transcriptions of other musicians’ solos is an invaluable exercise. It both trains the ear and enables one to see the scales, licks and techniques favoured by other players. Some jazz guitar instruction courses are based solely on learning existing jazz solos parrot fashion, and there is much to be said for this approach, so long as one learns how to adapt the material for use in other situations.

Jazz guitarists tend to have good technique, as jazz lines tend to be fast and make use of much of the fretboard. Good alternate picking technique is necessary, and sweep and economy picking should also be learned and practised. The fretting hand needs to be dextrous and strong, just as much for the complex chords as the lead lines.

How To Play Jazz Guitar Conclusion

This article has attempted to introduce some of the terms, concepts and techniques used in jazz guitar playing. Learning how to play jazz guitar may sound daunting, but it is only a few on from playing rock or blues. If you learn some jazz chords, think vertically when playing lead and practise some standards then you will be well on your way to becoming the next Pat Martino!

How To Play Jazz Guitar – Anything To Add?

Your responses are very welcome. Let us know if there is anything that we have missed and your approaches to either teaching or learning how to play jazz guitar.

7 thoughts on “How To Play Jazz Guitar”