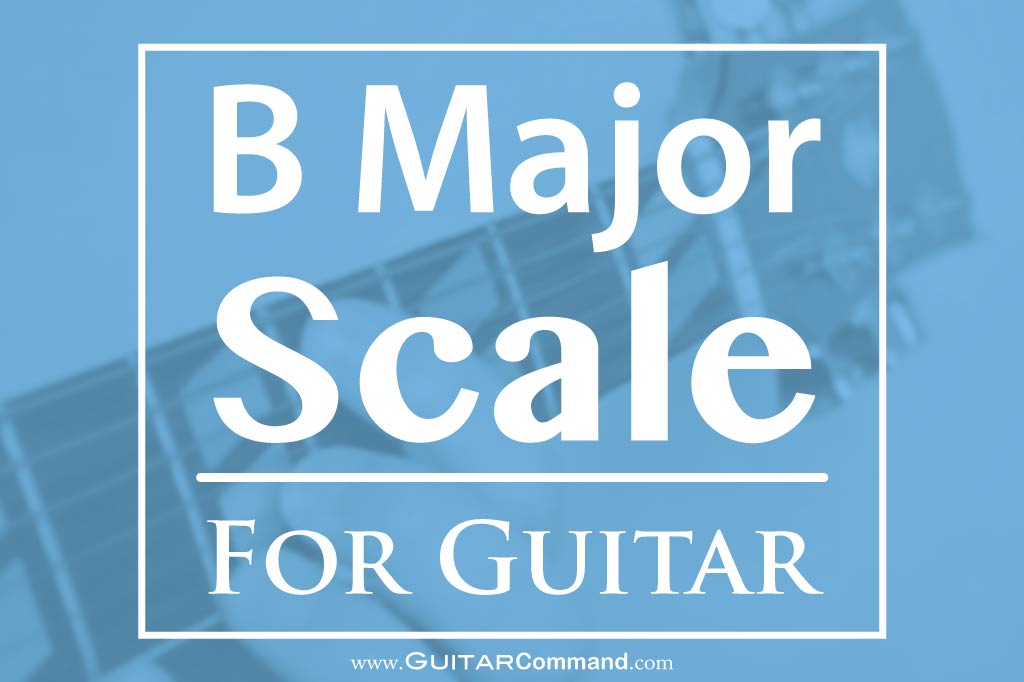 A complete guide to playing the B major scale for guitar. B major TAB, notation, and scale patterns / fretboard diagrams for electric, acoustic and classical guitars.

B Major Scale For Guitar: Introduction

As is the case with most things on guitar, there are several ways of playing a B major scale.

The 1 and 2 octave B major scales can be played on electric, classical and acoustic guitars. The 3 octave scale is suitable only for electric guitar; if you try it on either an acoustic or classical guitar you’ll run out of frets! Even on most electric guitars you’ll find yourself at the very top of the fretboard.

Beginners should start with the 1 octave open position B major scale before progressing to the other scales on the page.

You’ll also find a major scale pattern that can be used to play not only a B major scale, but also every other major scale, simply by moving the fretting hand to different fretboard positions.

Below is TAB for playing a 1 octave B major scale in open position (in fact, the scale below only uses one open string note, the open B string).

An alternative way of playing a one octave B major scale on guitar is shown below. The only difference is that the high B note is fretted, rather than played with an open string.

2 Octave B Major Scale For Guitar

The previous 1 octave B major scale can be extended to two octaves, as shown in the TAB below. You’ll have to change fretboard position as you play the scale in order to be able to reach the highest notes. 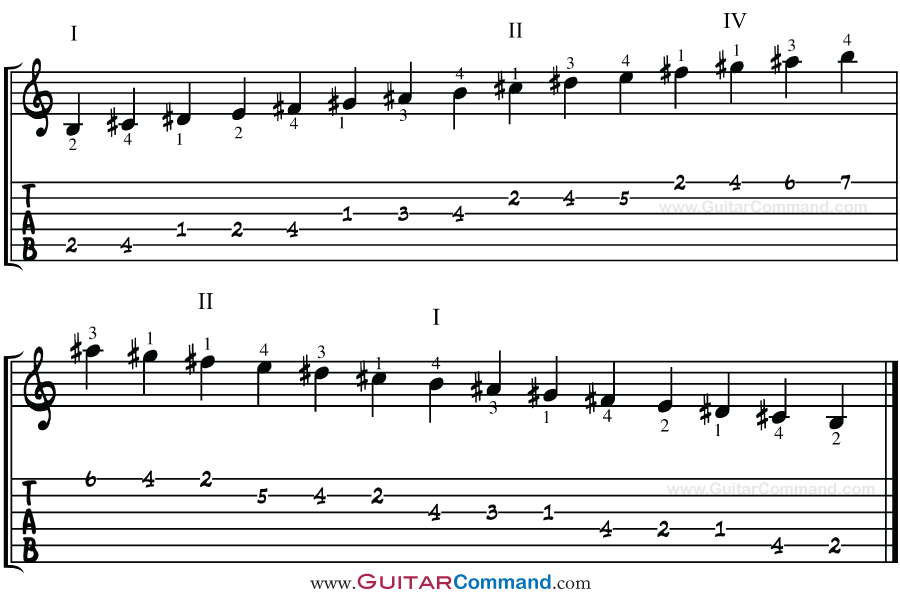 Below is an alternative method of playing a 2 octave B major scale. It begins in 4th position, with the 4th finger (the little finger) playing the B note at the 7th fret of the low E string. 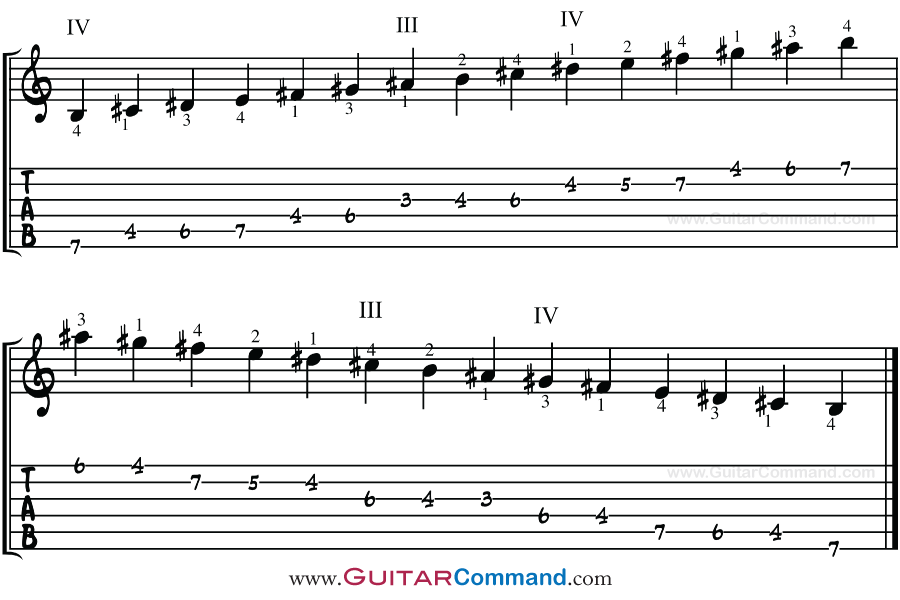 Yet another way of playing a 2 octave B major scale for guitar is shown in the TAB below. Note that this is the same as the scale produced by playing the B major scale pattern shown further down the page. 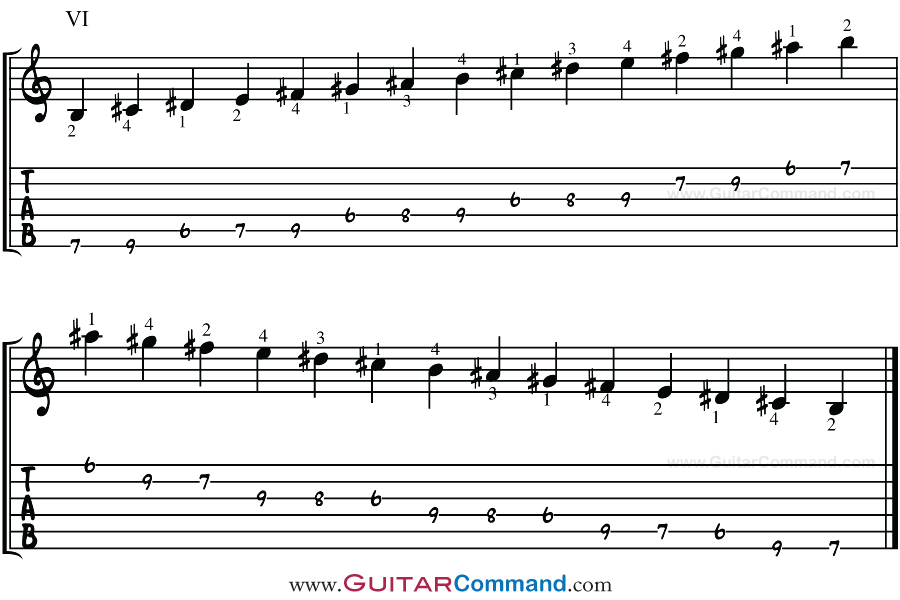 Playing a 3-octave B major scale requires a number of fretboard position changes. Keep an eye on the Roman numerals above the notation (or follow the TAB closely) to ensure you’re playing the notes at the correct frets.

The 3 octave B major scale is best played on an electric guitar. Reaching the higher notes can be awkward on classical and acoustic guitars (the high B at the 19th fret of the high E string is the top fret of many classical guitars). 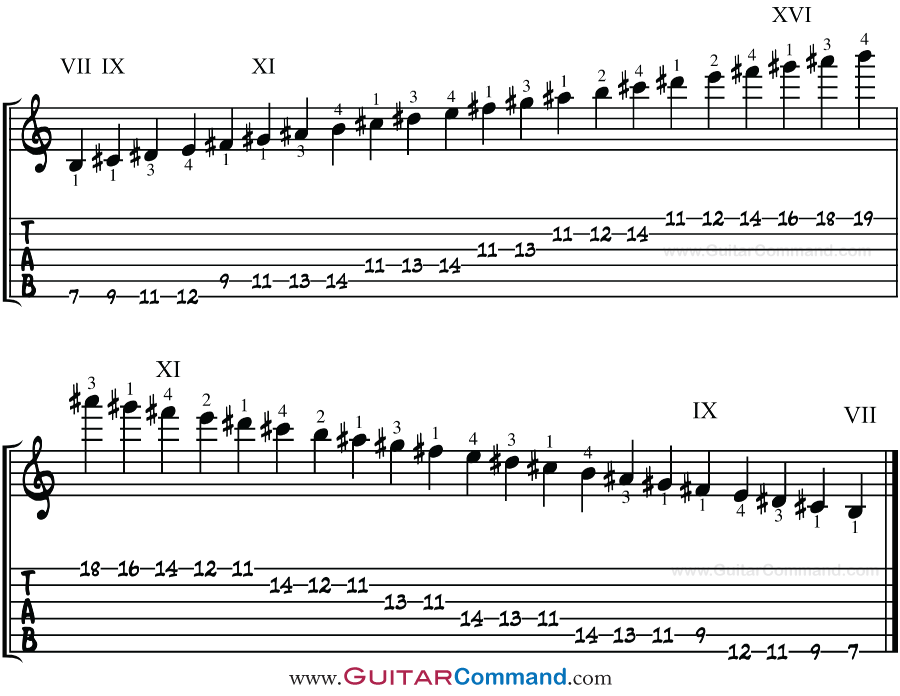 Below is a pattern for playing a B major scale starting at the 7th fret of the low E string. 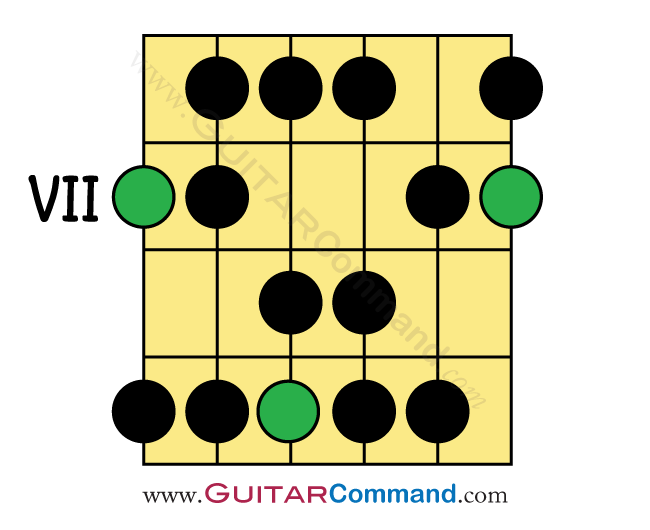 For example, by moving the above pattern 2 frets down (i.e. starting at the 5th, instead of the 7th, fret of the bottom E string), and keeping all the fingers in the same position relative to the new starting note, you’d be playing an A major scale.

Likewise, by playing the pattern 1 fret higher (i.e. starting at the 8th fret), you’d be playing a C major scale.

Notes In The B Major Scale

A B major scale, like all major scales, is heptatonic, which means that it contains seven notes before repeating again at the octave.

B Major Scale For Guitar: Conclusion

We hope that you’ve found everything you need on this page in order to be able to play a 1, 2 and 3-octave B major scale on your guitar.