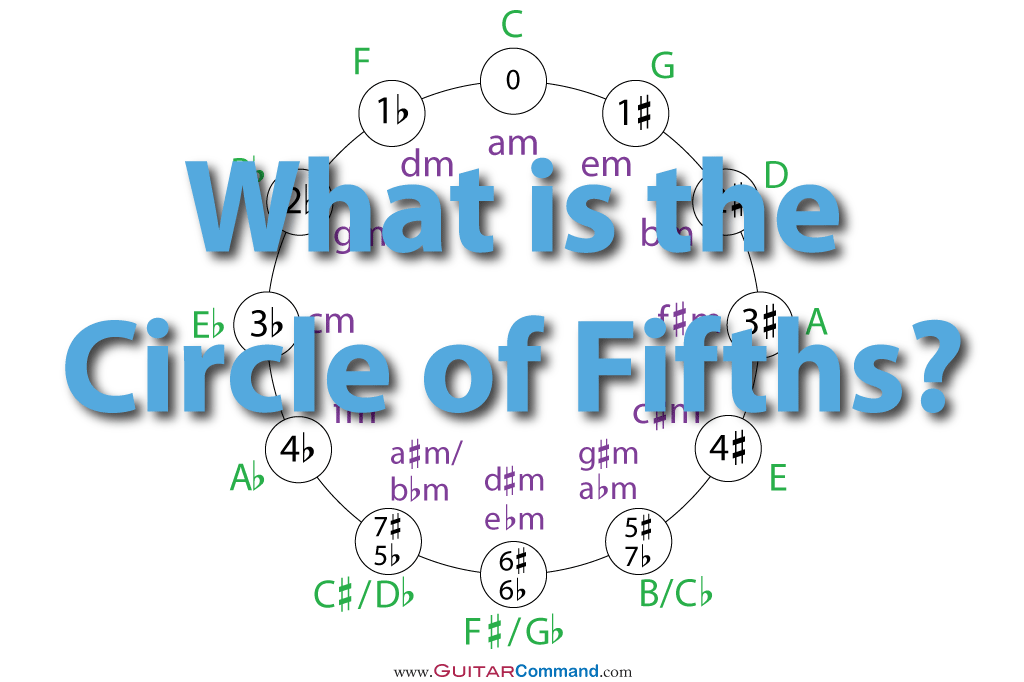 What is the circle of fifths? On this page you’ll find a beginner’s guide to this essential concept.

What Is The Circle Of Fifths? A Definition

The circle of fifths describes the relationship between the twelve notes of the chromatic scale and their corresponding key signatures.

Each of the 12 notes in the circle of fifths is a perfect fifth higher than the preceding note. The sequence loops around all twelve notes of the chromatic scale before returning to the starting note.

As well as showing the relationship between every note of the chromatic scale and every potential key signature, the circle of fifths can be used as a visual aid for remembering the number of sharps or flats in each key signature.

The circle of fifths can also be used as a composition tool; pieces often move to neighboring key signatures in the circle when they change key.

The Circle Of Fifths Explained

The above definition is quite a mouthful, so for the rest of the page we’ll go over what it actually means.

The circle of fifths applies to western music theory; some non-western musical traditions have intervals smaller than a half-tone between notes.

The circle of fifths shows us that a sequence of notes in which each note is a perfect fifth* higher than the previous note will eventually return to the original note – after having been through every note of the chromatic scale.

* A perfect fifth interval is the equivalent of seven half-tones (i.e. seven frets on a guitar).

The sequence is circular, so the above applies with any starting note.

Notes In The Chromatic Scale

Starting on a C, and rising up a half-step between each note, the twelve notes of a chromatic scale are:

The pairs of notes marked with an asterisk are what’s known as enharmonic equivalents; they’re the same note with two different names. 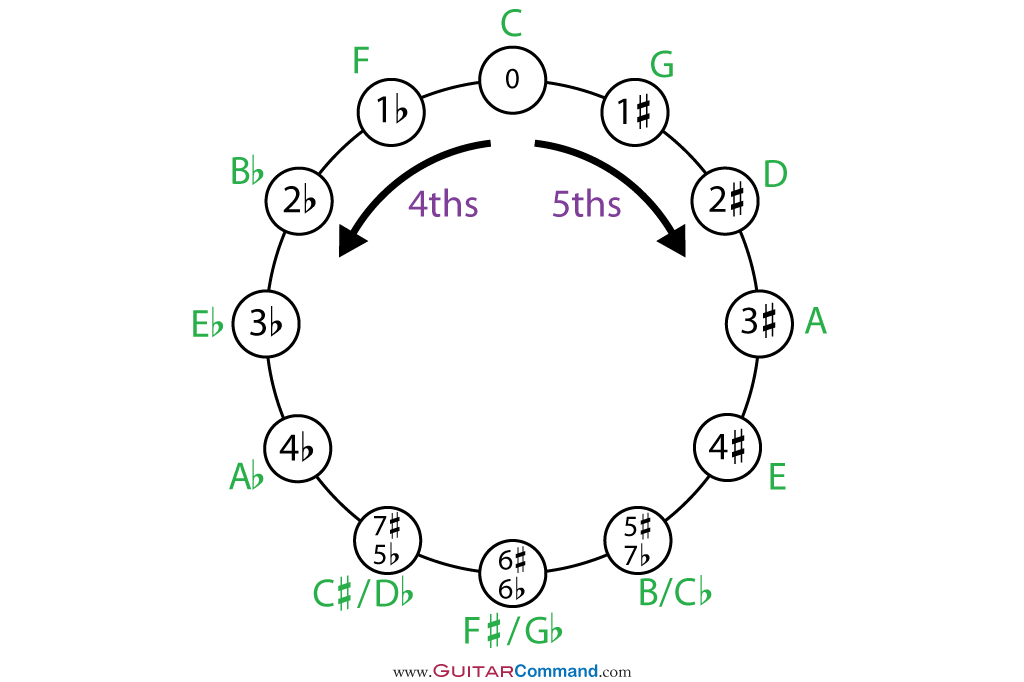 When represented visually, the circle of fifths consists of a circle whose circumference has been divided into 12 parts, just like a clock face.

At each ‘hour’ on the circle of fifths diagram is one of the 12 notes of the chromatic scale.

The note at the twelve-o-clock position is a C. The note at each subsequent position (moving clockwise) is a perfect fifth higher than the previous note.

Moving counter-clockwise, each note is a perfect fourth higher than the previous note. See the ‘Circle of Fifths Vs The Circle of Fourths‘ section, below.

As you can see from the diagram, a sequence of notes that moves in intervals of a perfect fifth will eventually return to the original note – whatever the starting note. The sequence will contain all twelve notes of the chromatic scale.

In other words, wherever you start on the circle of fifths, after twelve steps (which will contain every possible note) you’ll be back where you started.

The Circle Of Fifths And Key Signatures

The circle of fifths diagram at the top of the page (and repeated below) shows the notes of the chromatic scale and their corresponding key signatures.

We can therefore use the circle of fifths to memorize the number of sharps or flats in every key signature. (See below for an explanation of what a key signature is.)

What Is A Key Signature – A Reminder

A key signature is a group of sharps or flats that appears after the clef in a musical staff. It tells the performer which notes should be sharpened or flattened in the music that follows.

The number of sharps of flats in the key signature indicates the key that the music is in.

In the piece of music above (Twinkle, Twinkle Little Star), there are three sharps in the key signature. Therefore the piece is either in A major or its relative minor, f# minor*. (Note the convention of referring to minor keys using lower case letters.)

* The above piece is clearly in A, not least because the phrase starts and ends on A notes. There are many clues by which you can tell just by looking whether a piece is in a major or minor key, but it is outside the scope of this article to cover this in detail.

The absence of any sharps or flats means that a piece is either in C major or its relative minor, a minor.

Progressing clockwise around the circle of fifths results in the following keys, as shown below:

Moving clockwise around the circle of fifths from the C adds a sharp to each key signature until C# major / a# minor – which have 7 sharps – is reached.

Moving anti-clockwise from the C adds a flat to each key signature until Cb major / ab minor – which have 7 flats – is reached.

Note that some keys have enharmonic equivalents.

Many chord progressions move in 4ths. For this reason some musicians (particularly jazz musicians) prefer to learn the circle of fourths rather than the circle of fifths. Both amount to the same thing, but just seen from a different perspective.

What Is The Circle Of Fifths – Conclusion

We hope that you have enjoyed this explanation of the circle of fifths. If you have any questions then feel free to ask away in the comments section below. We’ll be happy to help!

Check out our guide to diatonic chords, where you’ll find every available chord in a particular key: Diatonic Chords