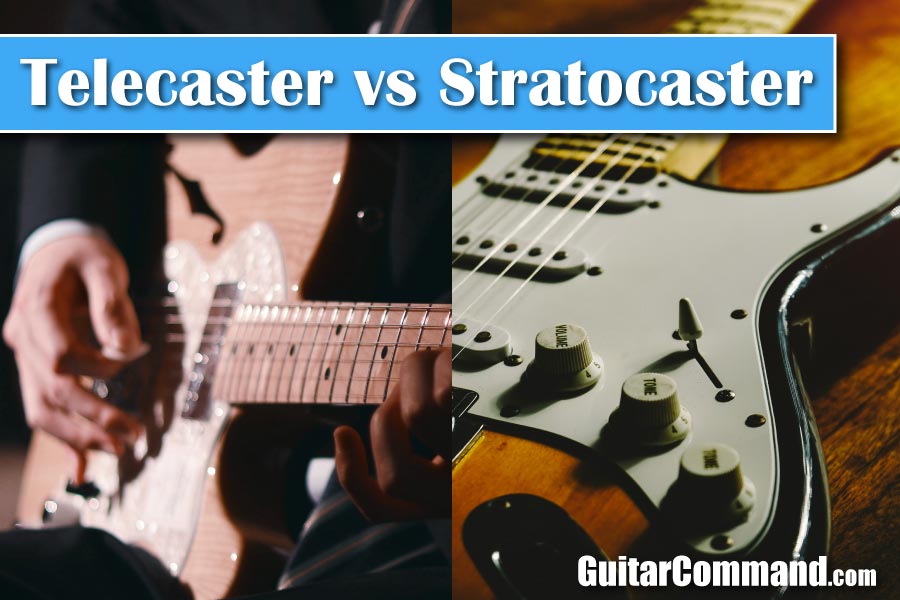 Telecaster vs Stratocaster: which is best for you and your style of playing? On this page you’ll find a complete guide to the differences between these two iconic electric guitars…

The Telecaster and Stratocaster are solid-bodied electric guitars first introduced by Fender in the ‘50s. The Telecaster, with its single horn body, two single coil pickups and narrow headstock, is a favorite of country and indie guitarists; the Stratocaster, with its two-horned body, three single-coil pickups and tremolo, finds favor among blues and rock guitarists.

Together, these iconic electric guitars have helped shape rock and pop music for almost seventy years, and are still among the most popular guitars for beginners and pros alike.

On this page is a complete guide to the differences between Telecaster and Stratocaster. We cover the construction, tone, body materials, playability, and the type of music you can play with each instrument.

We’ll also look at the famous guitarists who have played Telecasters and Stratocasters over the years, and provide you with a rough guide on how much you can expect to pay for each guitar if you want to get hold of one for yourself.

Bass vs Guitar – Which Is Best For You?

Electric vs Acoustic Guitar – Which Is Best For You?

They say that imitation is the sincerest form of flattery (although we’re not sure Fender’s legal department would agree), and between them, the Telecaster and Stratocaster have spawned a multitude of imitations from brands such as Ibanez, ESP, Charvel, Nash, and countless others.

As a general rule, comparisons on this page between the original Telecaster and Stratocaster guitars also apply to “T-style” and “S-style” copies.

Both the Telecaster and Stratocaster feature bolt-on necks. These are usually made from maple, and have 22 frets and a comfortable 25.5” scale. The shape of the neck usually varies by decade, with guitars from certain periods having wider or narrower necks than those from others.

The main difference in the necks of Telecaster and Stratocasters is that the headstock of a Strat is noticeably bigger and wider than that of a Tele.

This became particularly noticeable on guitars produced from 1965 to 1981; the years that Fender was owned by CBS. Some players, including Yngwie Malmsteen, claim that the larger piece of solid wood required to make this bigger headstock improves the guitar’s sustain and its overall tone, especially when compared to the smaller Telecaster headstock.

Both Telecasters and Stratocasters are available with either a maple or rosewood fingerboard.

The most noticeable visual difference between the two guitars is the shape of the body. The Telecaster features a flat body with a single cutaway, while the Stratocaster’s body is contoured, with a double cutaway to facilitate playing at the upper frets.

The Fender Telecaster, introduced in 1951, was the first mass produced solid-bodied electric guitar. Looking to refine his original model, Leo Fender made some modifications to his original design to create the Fender Stratocaster.

Among the concessions he made to player comfort were the introduction of contours on the Stratocaster’s body, notably where a guitarist’s arm might rest while playing.

An additional cutaway on the upper horn was implemented to make playing notes beyond the 12th fret easier for guitar players.

As a general rule, both the Telecaster and Stratocaster feature bodies made from alder. This lightweight wood has a resonant, balanced tone, with plenty of attack and sustain.

This rule does not apply to all Tele’s and Strat’s and alternative woods (such as ash and mahogany) have also been used at various times. George Harrison, for example, played a Telecaster made from rosewood.

Whereas the Telecaster traditionally has a fixed tailpiece, one of the defining features of the Stratocaster is the presence of a tremolo system, in which the bridge is mobile, being held in position by springs accessible from the underside of the guitar’s body.

A tremolo allows a player to lower or raise the pitch of a note or chord by pushing down or pulling up the tremolo bar (also known as a “whammy bar”).

The expressive effects made available with a tremolo system range from gentle vibrato to violent “dive-bombs” (although the latter is not advisable on the traditional, non-locking, tremolo systems found on most Strats as it would send the strings out of tune).

The fixed tailpiece of a Telecaster has the benefit of tuning stability and simplicity; the tremolo of a Strat allows for (arguably) greater expressivity.

Both the Telecaster and the Stratocaster are fitted with Fender single-coil pickups, and although the difference in the sound produced by the two guitars is discernible, it’s not as great as that between, say, a Telecaster and a Gibson Les Paul.

The Telecaster is known for its twangy, bright sound; the Stratocaster for its range of smooth, clear tones. The Tele has three pickup configurations; the Strat five.

The Telecaster has a brighter signature tone, but still offers plenty of versatility. Its neck pickup has a clear, bell-like sound, and the bridge generally has plenty of snarl and twang.

The bright twangy tones of a Tele are commonly heard in the country music genre, although the guitar’s searing, cutting tones have also made their way into rock.

For a classic Tele tone, think of Jimmy Page’s legendary solo on “Stairway to Heaven”. The Telecaster can sound as much like a big, boxy jazz guitar as a snarling Les Paul.

The Stratocaster’s tone is generally described as “glassy”. It’s warm and woody with a little bit of the chiming “plink” you might hear when flicking a wine glass with your fingernail.

It’s kind of like the aural equivalent of sunlight through a full beer glass.

The iconic Strat tone (sometimes described as “quacky”) is produced by using the bridge or neck pickup in conjunction with the middle pickup.

Using both pickups results in “phase cancellation” (essentially, the altering of a sound wave by combining two signals). An example of this Jimi Hendrix’s warm, yet fiery tone on “Little Wing”.

The Fender Telecaster was the world’s first mass-produced solid-bodied electric guitar. As such, many guitar heroes of the 1950s and 1960s adopted the Telecaster as a go-to instrument, even as other models, like Gibson’s Les Paul, entered the market.

The Fender Telecaster’s bridge pickup has a very distinctive sound. It’s a powerful, twanging tone with plenty of treble.

Initially, this tone was favored by guitarists looking to cut through the mix in large ensembles, particularly those with horn sections. You can still hear some players who favor this tone today, most notably Bruce Springsteen.

The “Tele Twang” is most commonly associated with country and country-influenced styles of music, but you can hear it on classic records by bands inspired by those early players, too.

The most famous Strat player of all time is Jimi Hendrix, whose groundbreaking use of the instrument continues to inspire legions of players all around the world.

The Stratocaster’s radical body shape and ergonomic contours made it popular with guitarists in the burgeoning rock and roll movement of the 1960s, and as such it is heavily associated with the British blues-rock boom and the bands it inspired.

Hendrix’s incendiary playing also led, if somewhat indirectly, to the development of virtuosic, distorted metal playing as we know it. Plenty of the hard rock and metal players of the 70s and 80s adopted the Stratocaster as their weapon of choice, including:

The Strat is also popular among players of lighter, pop-oriented music, including:

If you’re looking to pick up a Telecaster or Stratocaster, but don’t know where to begin, the good news is that there is a version of these popular guitars available at pretty much every price point.

There is virtually no difference in price between a Telecaster and a Stratocaster; at every level, from beginner to pro, Telecasters and Stratocasters generally cost about the same amount of money.

If you’re a total beginner looking to dip your toes in the waters of Fender tone, Squier (a Fender-owned brand) offers a broad range of quality entry-level guitars, like the Bullet Strat and Bullet Tele, for $200 or less.

Standard Squier Telecasters and Stratocasters cost between $300 and $500, and offer a good entry-point into the world of electric guitar playing.

If you want the “Fender” logo on your headstock, then Fender’s “Player” range of Mexican-made guitars typically go for between $850 and $1000, depending on where you live.

More expensive American-made Fender guitars can set you back thousands of dollars, but at that price point you’re paying for a genuinely high-end instrument.

There are also plenty of T- and S- style guitars made for those who want something a little different from the Fender classics, such as those made by Nash, Jackson, Tokai and Suhr. These range from bargain-priced Chinese copies, to more boutique instruments constructed in small numbers by master luthiers.

You can find out more about how much a new electric guitar might set you back on this page: How Much Is An Electric Guitar?

Bass vs Guitar – Which Is Best For You?

Electric vs Acoustic Guitar – Which Is Best For You?