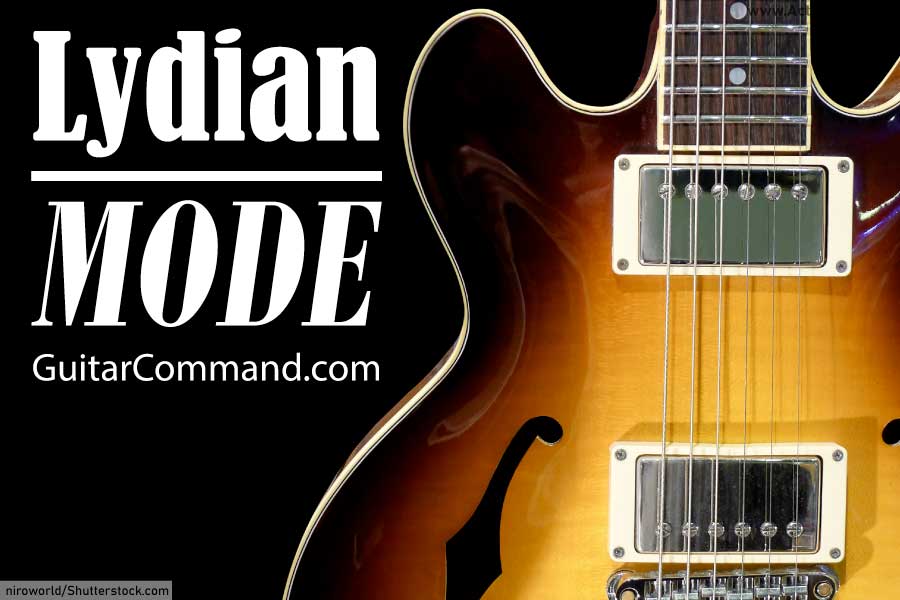 Lydian scale guitar tab, fretboard diagrams and information. On this page you’ll find out: how to play a Lydian scale on guitar; how the scale is formed; and when to use it.

What Is A Lydian Scale?

The Lydian scale is a modal scale formed by starting and finishing on the fourth degree of a major scale. Essentially, it’s the same as a major scale but with the fourth note raised a semitone / half-step.

The raised fourth note of a Lydian scale gives it a distinctive sound that isn’t often heard outside of jazz / fusion. The scale has quite an ‘open’, ‘ambiguous’ sound that will give your solos a modern, ‘dreamy’ feel.

With that being said, let’s play some Lydian scales…

Use the tabs below to play Lydian scales on your guitar.

The tab / notation below shows a 1 octave C Lydian scale in open position:

Use the tab below to play a 2-octave G Lydian scale in open position.

Use the tab below to play a 1 octave G Lydian scale in second position:

You could also use pattern 1 (see below) starting on the 5th fret of the 4th (D) string to play the scale shown in the above tab.

The tab / notation below shows a 2 octave C Lydian scale starting on the 8th fret of the bottom E string: 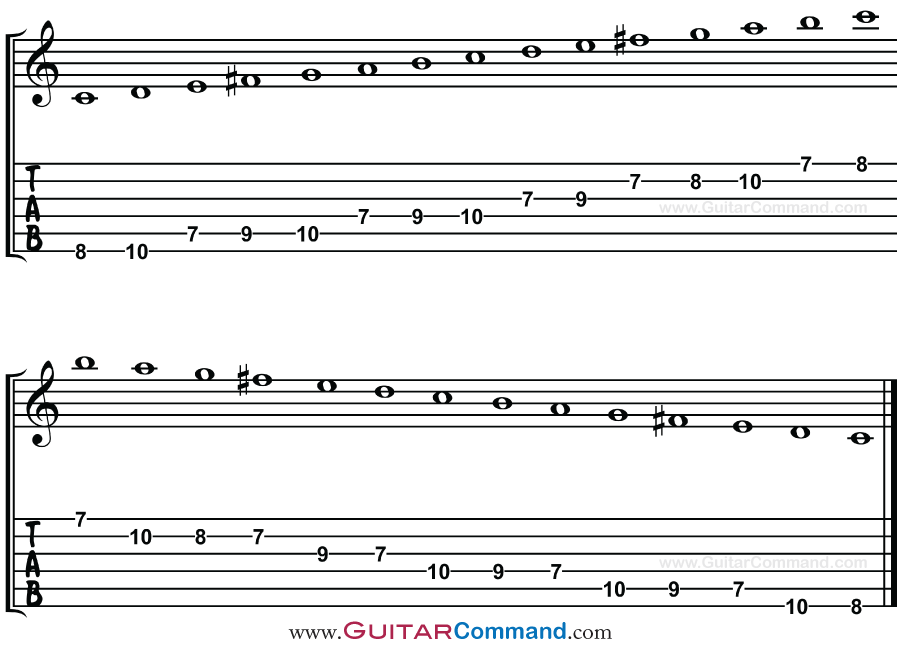 You could also use pattern 1 (see below) starting on the 8th fret of the low E string to play the scale shown in the above tab. 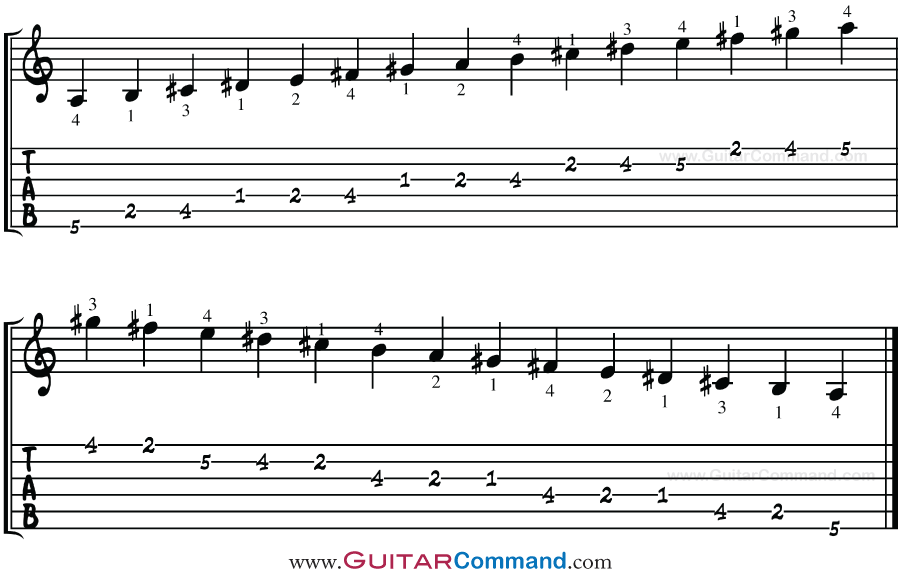 The above tab is the scale produced by playing pattern 5 starting at the 5th fret of the bottom E string.

The fretboard diagrams below show movable patterns that can be used to play the Lydian scale with any tonic note.

The green circles show the tonic note of the scale. (The tonic note is the note that the scale is named after, e.g. the ‘C’ in C major.)

Position your chosen pattern so that the green circle(s) are over the tonic note of the scale you want to play (i.e. position the green circle over a G note on the relevant string to play a G Lydian scale).

This is the ‘basic’ Lydian scale pattern. One you’ve learned it, you’ll be able to play a 2-octave Lydian scale with any tonic note by playing the pattern at the desired fretboard position.

You can then go on to learn one or more of the other patterns. This will give you access to the scale in numerous fretboard positions.

(If you only know one pattern for a scale, you may find that in order to play the scale with the desired tonic note, you have to shift to an uncomfortable fretboard position. If you know several patterns, you’ll have a pattern close to hand wherever you are on the neck.) 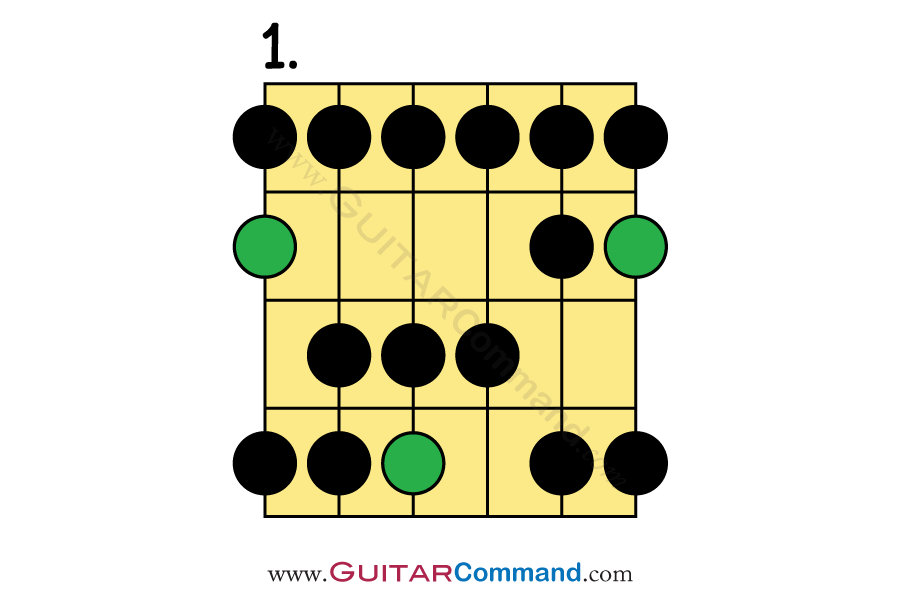 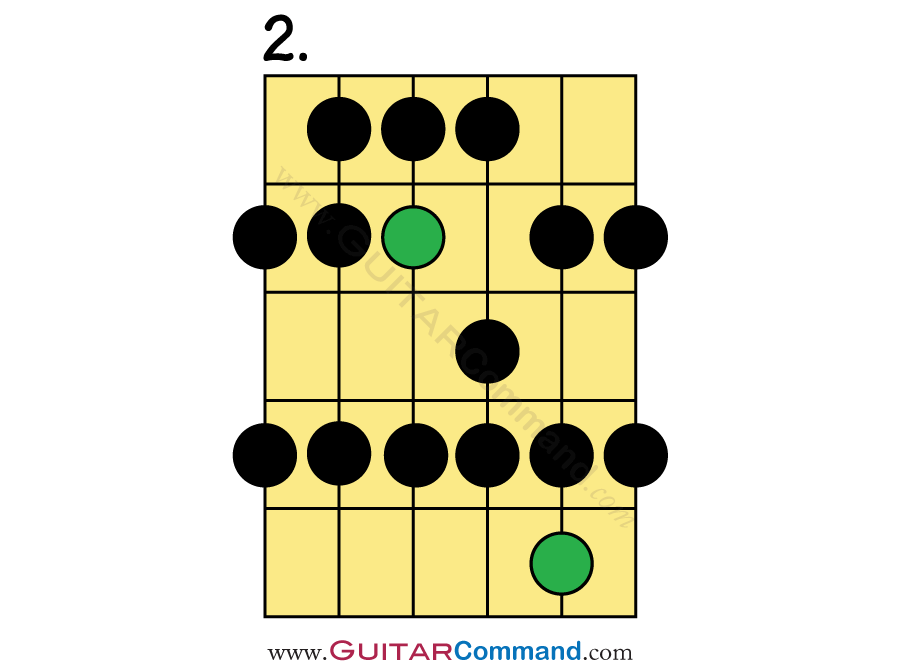 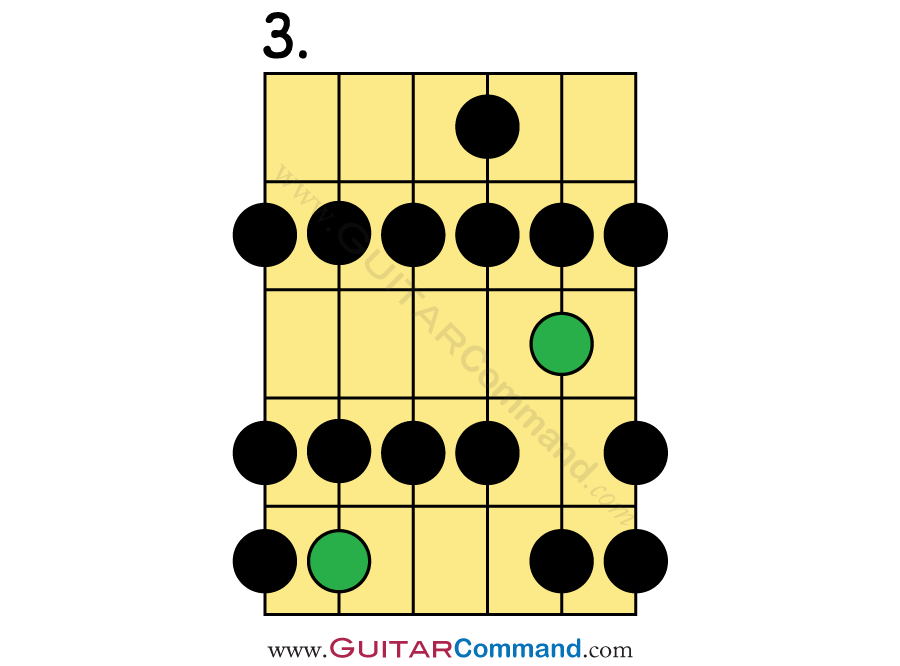 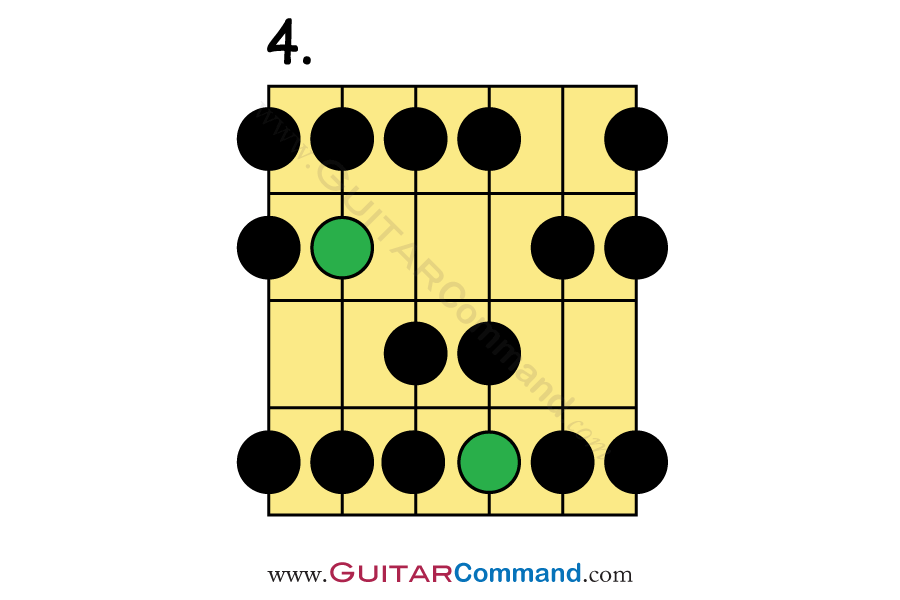 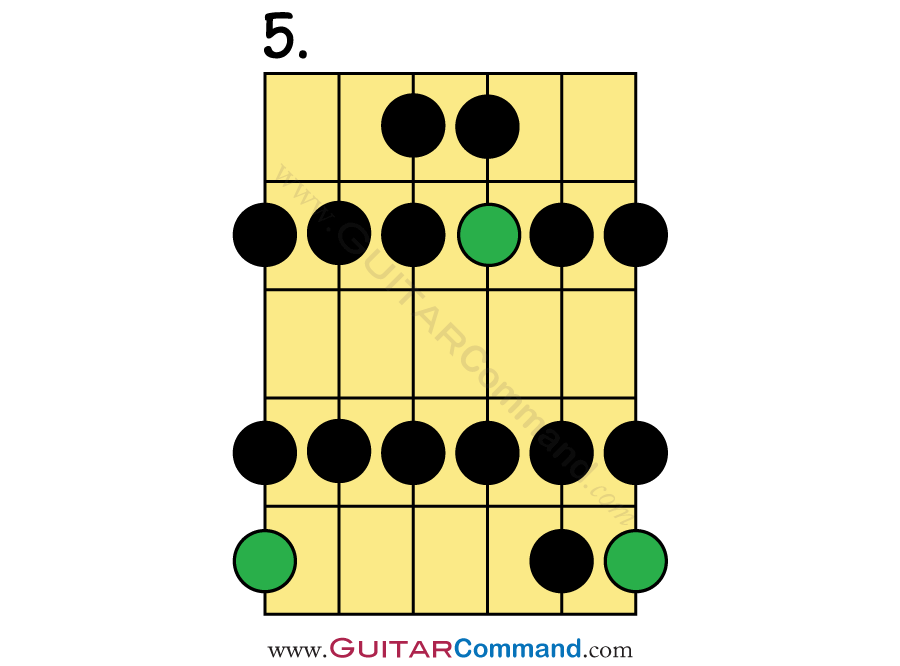 When To Play A Lydian Scale

Where it really comes into its own is when it’s used over a chord such as a major 7#11. With the chord containing the same sharp 4th / sharp 11th note (they’re the same) as the Lydian scale, it’s the perfect scale to use to bring out the color of the chord.

The Lydian modal scale uses the same notes as those in a major scale, but starting and ending on the fourth note of that scale.

For example, a D major scale contains the following notes…

… while a G Lydian modal scale contains the same notes, but starting on the G:

As you can see, the G Lydian scale uses the same notes as a D major scale (i.e. it has two sharps: F# and C#), but starts and ends on the fourth degree of the D major scale.

If you know a major scale shape on guitar, you can start and end on the fourth note, and you’ll be playing a Lydian scale.

Another way of looking at the Lydian scale is by comparing it to the major scale with the same tonic note.

For example, a C major scale contains the following notes:

C Lydian scale is almost the same, but its fourth note is raised a half-step / semitone, as shown below:

Now you know the theory, it’s time to learn the scale patterns at the top of the page and play some cool (and slightly strange) Lydian solos!

We hope that you have enjoyed learning about the Lydian scale. Try using this scale for yourself, either by writing Lydian melodies, or by using it in improvisation.