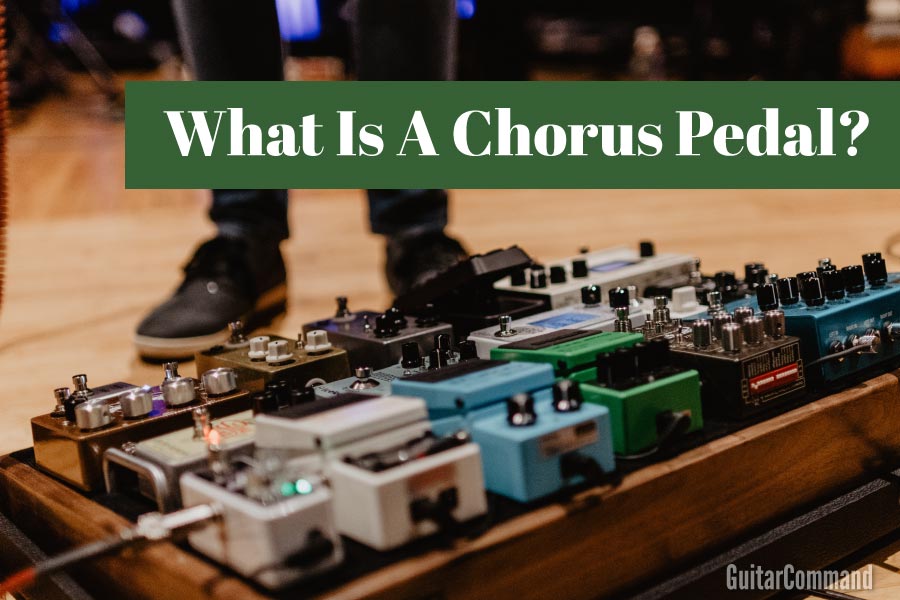 The warm, shimmering sound produced by a chorus effect is one of the most recognizable electric guitar sounds in modern music.

Whether it’s provided by an old-school effects pedal or its modern, software equivalent, this classic effect includes a number of ‘standard’ controls such as depth and rate that can be altered according to the player’s requirements.

On this page we’ll explain just what the chorus effect does; take a look at the standard chorus pedal controls; and find out how you can use chorus in your own playing.

Most guitarists use an effect pedal, or ‘stompbox’ to get their chorus sound, and further down the page we’ll take a look at some classic guitar chorus pedals.

What Does A Guitar Chorus Pedal Do?

A chorus pedal is a guitar effects pedal that produces a shimmering, ‘wobbly’ effect designed to replicate the sound of multiple instruments playing at the same time. This is achieved by making slight alterations to the pitch and timing of the dry signal. Most guitar chorus pedals have controls such as rate and depth as standard. These control the rate and depth of the modulation effect respectively. Chorus pedals usually output a stereo signal by modulating the affected sound between the left and right output channels.

Chorus In A (Stomp) Box

The chorus effect pedal evolved to mimic the sound quality of a group of vocalists singing the same melody line in unison.

Although each vocalist is singing the same notes in the same order, the slight differences in both pitch and timing between the individual singers combine to create a sound that is broader, lusher, and more complex than that created by a single singer.

Another example of the chorus effect is the rich sound of a string section versus the relatively small sound of a single violin.

In order to accomplish this effect electronically, a chorus pedal manipulates the audio signal from a guitar, doubling the signal and then processing the doubled signal with a combination of delay and pitch shifting to deliver a warmer, broader tone.

What Type Of Guitarists Use A Chorus Pedal?

Whether you’re a shredder looking to thicken up those screaming lead lines, a rhythm guitarist wanting to liven up your clean sound, or an acoustic guitarist looking for a warmer, thicker amplified sound: grab yourself a chorus pedal; it may be just what you need.

And of course, if you want to emulate the classic 1980’s rock / pop guitar sound made famous by bands such as the Police and the Cure, a chorus pedal will already be at the top of your shopping list (or taking pride of place in your pedal board)!

What are the Standard Controls On A Chorus Pedal?

Standard controls on a guitar chorus pedal include rate, depth, and mix (also called “blend”, or “effect level”). Some chorus pedals include delay and shape controls, which allow for further sonic adjustment.

Not all chorus pedals include every single one of these parameters; pedals such as the MXR Micro Chorus and Electro-Harmonix Small Clone have just a single knob, which adjusts the rate of the chorus effect.

Conversely, pedals such as the Strymon Ola and the Boss CE-5 include all the standard parameters and more.

But what exactly do the common controls on a chorus pedal do?

The rate parameter on a chorus pedal controls the speed of the modulation effect. A chorus pedal incorporates a low frequency oscillator, or LFO, in order to generate the modulating chorus effect.

The rate knob adjusts the rate or speed of this LFO. Rate is sometimes substituted for a “speed” setting and vice versa. A high rate setting will produce a fast, vibrato-like tone, while a slower setting will generate a more subtle and gradual modulation effect.

The depth parameter on a chorus pedal controls the amount of pitch shifting the effect will produce. Part of what gives the chorus effect its distinct ‘wobbly’ quality is the slight detuning of the doubled audio signal.

A higher setting on the depth knob increases the amount of pitch shift, thereby lessening the subtlety of the chorus effect.

The delay parameter on a chorus pedal controls the amount of delay between the dry / unaffected signal and the wet / doubled signal.

The delay is measured in milliseconds, but is not often labeled as such on chorus stompboxes. More commonly, the knob with an indication of minimum (min) and maximum (max), with no specific values.

The length of delay time is the main feature that distinguishes a chorus pedal from another common modulation effect, the flanger. Delay times on a chorus pedal generally run longer than flanger effects, commonly ranging anywhere from 20-50 ms.

The chorus delay parameter may also be called something like voice, ambiance, or tune. Think of the delay setting as a sort of stickiness or glue; the longer the delay setting, the more space will exist between the original, dry signal and the doubled, wet signal.

The shape parameter on a chorus effect controls the type of wave generated by the LFO. This parameter is generally controlled by a toggle switch between two options: a sine wave and a triangular wave.

Occasionally, there may be a setting for a square wave, which sounds somewhere in the middle of the sine wave and the triangular wave.

The mix parameter on a chorus effect simply determines the ratio between the original, dry, signal and the doubled, ‘wet’ audio signal sent to the outputs. Keep it turned down low for a subtle effect; dial it up to the max for a wild, wobbly, 80’s vibe!

As we’ve found, the chorus effect was invented to recreate the sound qualities produced when a group of singers (or other musicians) sing or play in unison.

Precursors to the modern chorus effect include a pitch shifting effect on the Hammond Organ, and the Automatic Double Tracking (ADT) effect popularized by the Beatles at Abbey Road Studios in 1966.

However, the circuitry for the modern chorus effect as it is known today first emerged in the 1970’s with Roland’s classic Jazz Chorus amplifier and then later with the first stompbox chorus pedal, the Boss CE-1.

The Boss CE-1 Chorus Ensemble was the first standalone chorus pedal on the market and employed the same circuitry from the Roland Jazz Chorus amplifier, but housed inside a convenient pedal.

The pedal quickly caught on with guitarists such as Andy Summers of the Police and Robert Smith of the Cure. It not only set the standard for future chorus pedals, but also helped define the sound of the electric guitar in popular music for decades to come.

An original Boss CE-1 pedal will fetch top dollar these days, that’s if you can find one.

Building on the success of the original CE-1, Boss released the CE-2 in 1979. It was the company’s first compact chorus pedal. as well as being smaller than the original CE-1, it featured a stripped-down control panel, with only the rate and depth being alterable by the user.

Like its predecessor, the CE-2 is now collectable, so check your attic to see if your dad used one in his rock n’ roll days!

If you hanker for the classic CE-1 and CE-2 sounds, Boss make the CE-2W as part of their Waza Craft range. This neat pedal reproduces the classic sound of both pedals in a single stompbox.

This feature allows guitarists to send a dry signal out to one amplifier and a wet signal to another amplifier, further increasing the range and depth of the effect.

The pedal contains just two parameter knobs, rate and depth, and a 2-way mode switch to select between the different stereo modes.

The Electro-Harmonix Small Clone is another defining pedal in the history of chorus effects.

Originally manufactured from 1979 to 1983, the Small Clone is prized for its simplicity. The Small Clone has a single control knob for rate and a toggle switch for depth.

The Small Clone has since been reissued, and the original pedals are highly sought-after due to their use by Kurt Cobain on the Nirvana albums Nevermind and Aneurysm.

What Is A Chorus Pedal: Conclusion

Used by artists as diverse as the Police, the Cure, Soundgarden, Prince, Mild High Club and Mac Demarco, the chorus effect provides depth and character to electric guitar sounds in numerous musical styles.

The chorus effect helped to define a generation of electric guitar sounds in the 1980’s and its sound remains popular to this day.