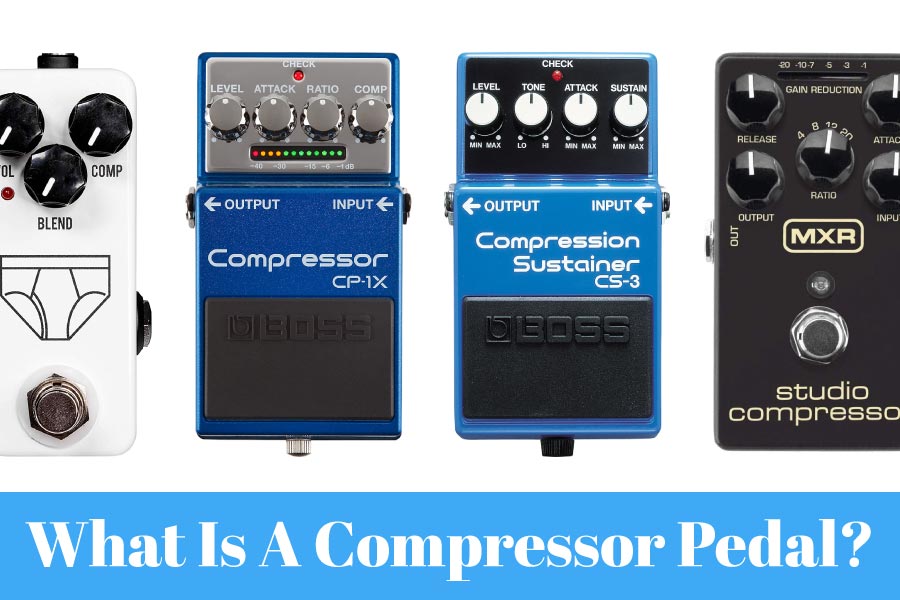 What Is A Compressor Pedal?

A guitar compressor pedal smooths out the audio levels of your playing by suppressing the loud parts and boosting the quiet parts. This results in a flatter, more even tone. Potential benefits of compression are: increased sustain; a louder overall tone; and a sound that potentially sits better in a mix. Over-use of compression can result in a lifeless, un-musical tone that lacks nuance and can be tiring for the listener.

Have you ever asked yourself what a compressor pedal does, or wondered whether a compressor would improve your guitar tone?

You’re not alone; compressors can be mystifying, even for the seasoned pro!

What Does A Compressor Pedal Do?

A compressor pedal evens out the levels of your playing by shaping the loudest parts of the audio signal. In addition, most compressors boost the remaining parts of the sound. This gives rise to a number of effects, such as: making your guitar sound louder; giving your tone a little more brilliance / sparkle; and increasing clarity and sustain.

But how does a compressor pedal do this?

Compression serves many functions and comes in many different forms. However, at the most basic level, a compressor does exactly what its name implies: it compresses sound.

Specifically, the compressor effect decreases the overall dynamic range of an audio signal.

By decreasing the dynamic range of a sound, the compressor causes the peaks and valleys of that sound to become closer. The overall effect is a smoother and more balanced sound.

The initial compression part of the effect affects just the loudest parts of an audio signal. The actual level at which the compressor steps in is set by the user with the threshold control (see below).

The compressor doesn’t just clip the loud parts (that would be a limiter effect); instead it ‘shapes’ the loud parts, making them quieter while allowing some of the original nuances to remain.

Exactly how the loud parts are shaped depends on both the compressor pedal being used and the settings being used.

With the loud parts of the audio signal made quieter, the compressor pedal then brings up the overall volume of the sound, resulting in a higher average volume.

This also has the effect of making quieter parts of the sound (e.g. the sustain part of a guitar note) louder and more noticeable.

You may have played with a compression pedal at your local guitar store and felt overwhelmed by the wide array of parameter controls.

Compression can be a very subtle effect, and it’s quite possible to use a compressor without hearing any difference between the settings. It’s equally possible to go overboard with compression and make your sound flat or muddy.

Guitar compressor pedals generally have four basic controls: threshold, ratio, attack, and release. All four of these parameters influence one another in different ways.

A higher threshold setting means that only the loudest parts of a sound will be compressed to the level of the threshold.

For example, if threshold is set at -5 dB, then any signal above -5 dB will engage the compression effect.

Threshold plays an important role in the ratio parameter and is also modulated by the attack parameter.

If the ratio parameter is set to 4:1, that means for every 4 dB an audio signal is above the threshold setting, the gain will be reduced by 1 dB.

The third parameter of most compression effects is attack. The attack parameter controls how fast the compression engages once the threshold has been reached and how quickly the gain reduction ratio is met.

Attack is measured in millisecond (ms). Attack parameter times generally vary from 1-100 ms. For example, a short attack setting of 1-10 ms means that the gain reduction ratio of the compression effect will take place 1-10 ms after the audio signal has breached the threshold.

A longer attack setting of 40+ ms means that the compression effect will engage and the gain reduction ratio will be met 40+ ms after the threshold parameter has been reached.

Short and fast attack times can help tighten up and balance out loud, unintended spikes in dynamics inherent in fingerpicking and funky guitar styles.

However, too much attack will leave your tone bland and lifeless.

Longer and slower attack times can help increase the punchiness and impact of a sound, but may potentially increase any inconsistencies in a performance’s dynamics.

Release is the fourth control found on most compression effects. The release parameter controls the time in which the gain-reducing component of the compression effect is released from an audio signal. Like the attack parameter, release is measured in millisecond (ms).

Shorter release times preserve more of the original dynamic of an audio signal. Note, however, that a short release time combined with a large ratio can produce unwanted pulsing effects in the overall sound.

If the gain of a signal is heavily reduced and then quickly released, there will be a pulsing effect caused by the sudden return of the signal’s gain.

Longer release times produce a more even-feeling dynamic, but like a fast attack time, can leave the guitar tone a little dehydrated.

One other time-based parameter that is worth understanding is the difference between soft knee and hard knee compression.

Soft knee and hard knee settings are tied to the threshold setting, adding another layer to the engagement of the compressor’s gain reduction effect.

Soft knee compression is applied gently to the audio signal as the signal moves above the compressor’s threshold setting.

Hard knee compression means the compression is applied in full when the audio signal reaches the threshold parameter. This is akin to a faster attack.

Generally, compressor pedals have a toggle switch between soft and hard knee, if the option is given at all.

When To Use Compression In Guitar Playing

Now that you have some understanding of the basic parameters of compression effects, you may be wondering when to use compression on guitar…

Compression can be useful as a general ‘foundation’ for your sound.

Of course, there are many different compression effect pedals on the market and they all offer different qualities and parameters. The key is to experiment with as many of them as you can to find the tone you are searching for.

Maybe you have visited your local guitar store and noticed that some of the compression pedals available don’t have controls / parameters such as threshold, attack, release, ratio, etc.

In most cases, those controls will be there, but with different names, such as sensitivity, sustain, output, and blend. Pedal manufacturers can sometimes get creative with the descriptions of the controls on their compressor pedals.

Sensitivity can mean threshold – perhaps pedal manufacturers think that guitarists aren’t interested in the ‘boring’ concept of threshold and instead are more likely to purchase a pedal if it will increase the perceived ‘sensitivity’ of their guitar?

However, now that you understand these basic parameters of compression effects, you’ll hopefully be able to discern what does what on most available guitar compression pedals.