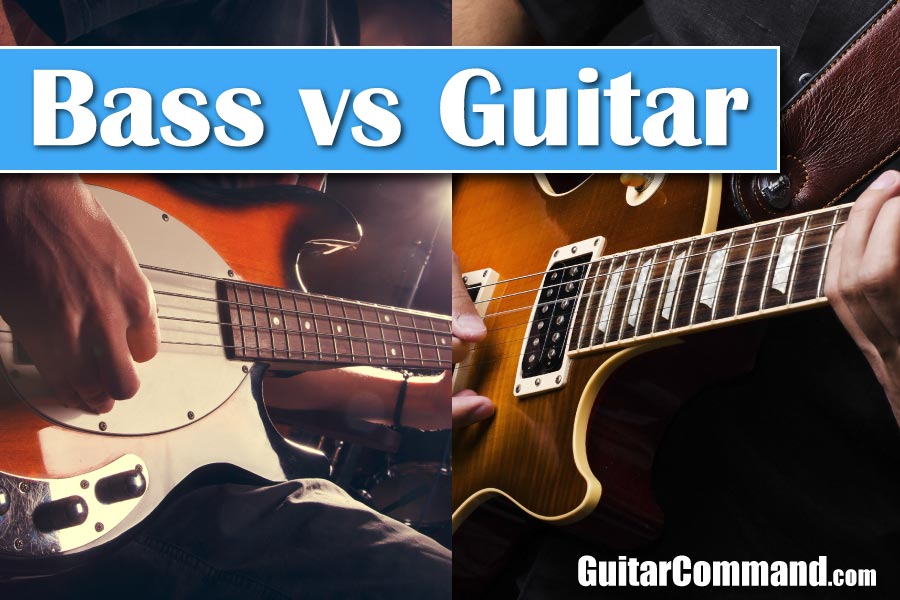 Bass vs guitar–which instrument is best for you? Which is easiest to play? Which takes longest to learn? What is the difference between bass and guitar?

On this page we answer all of these questions and more, giving you a complete guide to the differences between bass and guitar…

What Can You Play On Each Instrument?

Which Is Easiest To Play–Bass Or Guitar?

Despite there being some similarities in the bass guitar and electric guitar, they are very different instruments. Whereas a bassist will understand the principles of guitar playing, and vice versa, both musicians typically play different roles within a band.

This page has been written to give you a better idea about the difference between bass and guitar, and the playing styles required for each instrument. We also discuss the gear you’ll need to get started, and which of the two instruments is easiest to learn.

Our aim is to provide a useful guide for anyone considering learning either the bass or the guitar. If you have any questions, then feel free to ask them in the comments section at the bottom of the page.

Below is an at-a-glance list of the main difference between bass and guitar. We elaborate on each of these points further down the page.

A bass is designed to produce lower notes than a guitar, therefore the main physical differences between bass and guitar are due to the physical requirements of producing those lower tones, namely: wider frets, a longer neck, and thicker strings.

The basic construction of a bass guitar and an electric guitar is much the same. In their standard forms, both instruments have solid bodies, fretted fingerboards, pickups to convert string vibrations into electrical signals, knobs to adjust volume and tone, and machine heads for tuning the strings.

Physics demands that the lower the note, the wider the space between each fret. As the notes get lower on a standard guitar, the frets get wider, and because the bass is essentially an extension of the guitar, the frets on a bass fretboard continue to get correspondingly wider.

Wide frets mean a long neck, and the neck of an electric bass is significantly longer than that of a typical guitar.

An electric bass can feel “less balanced” than a guitar while in use, although this is something you’ll quickly get used to.

Therefore, any note played anywhere on the fretboard of a bass guitar is the same note, but an octave lower, as that played at the same fret on the corresponding string on a guitar.

You can find out more about guitar notes on this page: Guitar String Notes

When plugged directly into an amplifier and played clean (i.e., without any effects or EQ applied) both bass and guitar produce a clear, ringing tone, with that produced by a bass guitar being naturally lower and “boomier”.

In a typical rock band setting, a guitar is called on to produce a greater variation of tones than a bass.

Whereas the bass is usually played with a clean (undistorted) tone with subtle or no effects, an electric guitar’s sound is often modified with distortion and any number of additional effects, from chorus to delay.

Played without an amplifier, both bass and electric guitar produce an extremely quiet, tinny sound, which is unusable for any purpose other than practicing in a quiet environment.

Bass guitarists often play with their fingers rather than with a pick, although playing bass with a pick is also very common. By contrast, electric guitarists are far more likely to play with a pick, only resorting to playing “fingerstyle” when a particular sound is required.

Playing bass with the fingers gives more control over the individual notes, whereas playing with a pick produces a relatively brighter, more cutting sound. Some bassists alternate between the two techniques.

Slap bass – a playing technique that involves the thumb striking, rather than plucking, the strings–is a technique unique to the bass. It can be used to create highly-rhythmic bass lines, and is common in funk and funk-influenced music.

You can find out more about playing bass guitar on this page: Playing Bass Guitar

What Can You Play On Each Instrument?

Both bass and electric guitar are predominantly ensemble instruments; it’s rare to see either instrument being played solo.

The extra strings of a guitar, together with the relative ease with which chords can be played, and the higher overall pitch of the instrument, make it a more suitable instrument for playing riffs, melodies and solos.

The bass guitar, by comparison, is usually restricted to playing low notes and a supporting role within a band.

The typical role of a bassist in a band is to both reinforce the rhythm of the drums and to provide the harmonic underpinnings of a song.

A bass part typically does not contain chords, and is often a relatively simple line that closely follows the song’s chord sequence and repeats numerous times, perhaps with fills or other embellishments for variation. A bass may also play the song’s main riff between chorus and verse, etc.

A guitar part typically includes chords, riffs and lead lines. Guitars provide rhythmic backing, but in addition are often called on to provide the “focal point” of the music when there is no singing.

Great bassists create memorable, interesting bass lines and riffs without losing sight of the fact that they’ve also got a job to do providing the lower frequencies of the band’s sound.

Playing bass in a band involves locking in with the drums, providing the groove, making the room rumble, and occasionally taking the spotlight with a riff; it’s a highly-satisfying role!

You can find out more about bass scales on this page: Bass Scales

You can find out more about bass chords on this page: Bass Guitar Chords

Bass and guitar have the same basic gear requirements: both instruments require both an amplifier, and a lead to connect the instrument to said amp.

A strap is required if either instrument is to be played while standing. An electronic tuner is highly recommended (and almost essential in a recording or live setting).

Bass amplifiers typically have both a higher power rating, and larger speakers, than guitar amps. This is a result of the higher power required to produce the lower-frequency sound of a bass.

Bass guitarists tend to use fewer effects that guitarists, and can often get away with nothing more than an amp.

By comparison, guitarists are often required to switch between different sounds, both between and during songs, and as a result, use footswitches and effects pedals for making rapid tone changes.

Which Is Easiest To Play?

However, in terms of being able to play in a band, then it could be argued that a bass is easier to play than a guitar. This is because bass lines tend to be simpler than guitar lines.

Of course, this is a very basic overview, and in actual fact it will take years of dedicated practice to master either instrument!

On this page we’ve outlined the basic differences between bass and guitar and the respective sound, playing styles and gear requirements of each instrument. Comparing instruments is controversial; there are pros and cons in playing either bass or guitar, and “bass vs guitar” is a bit of a “how long is a bit of string” question

Extroverts are more likely to opt for the guitar, as they’ll be in the spotlight more! That said, a good bassist will always find a chance to shine.

Playing either instrument is highly rewarding, and, because there is so much in common between the bass and guitar, you can always swap later on in your career!

You can find out more about playing the bass guitar on this page: Playing Bass Guitar

Find out more about the similarities and differences between bass and guitar on this page: Is A Bass A Guitar?

Download or get a printed copy of our awesome bass guitar reference book: Bass Scales, Chords and Arpeggios