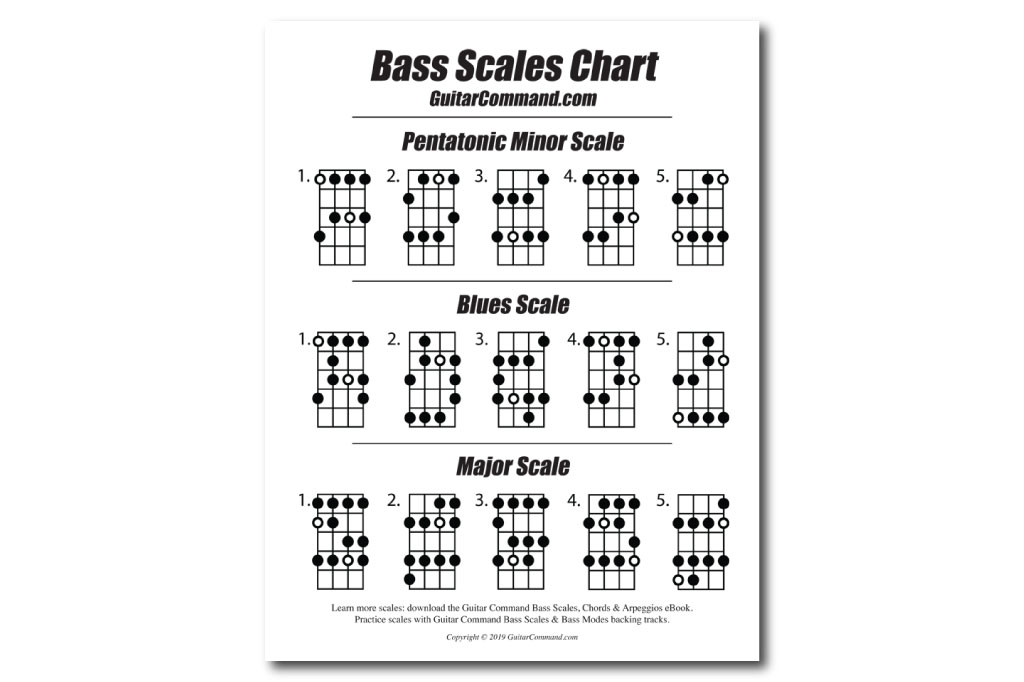 On this page you’ll find a useful bass scales chart with patterns for three of the most commonly-used bass guitar scales.

The bass scales chart below shows three common bass scales (pentatonic minor, blues and major) as patterns on a fretboard. They show the scales as played on a 4 string bass with standard tuning.

Scroll down to download a printable pdf version of the chart, with no log-in or sign-up required.

In the majority of cases, they’ll be referring to the pentatonic minor scale, which is the one we’ve included in the bass scales chart above.

The pentatonic minor scale is extremely versatile, and can be used in a number of musical situations. These include: writing rock / metal basslines and licks; improvising over minor chord progressions; and writing folk melodies.

The blues scale is simply a pentatonic minor scale that has been embellished with a single, additional note. This is the flattened fifth degree of the scale, a note that is also known as the ‘flat 5’, or ‘blues note’.

Blues scales, as the name suggests, have a ‘bluesy’ sound. This common scale is used not only in blues, but also in rock, metal, jazz and many other musical styles.

The chart can be printed on a single piece of paper and will make a useful reference for the wall of your practice room.

If you have any questions about the scales on this page then feel free to ask them in the comments below; we’re happy to help.

Having a good knowledge of bass scales is an useful skill for a bass guitarist. Scales are used in writing basslines, in improvisation and in songwriting.

If you’re interested in learning more bass scales, as well as bass arpeggios and bass chords, then check out our book: Bass Guitar Scales, Chords and Arpeggios. It’s available either as a pdf download or as a physical book.

Our Bass Scales Backing Tracks album contains a selection of tracks, each of which allows you play along using a specific scale. Use the tracks to invent bass lines or to improvise bass solos. See more information and hear sample tracks on this page.

Our Bass Modes Backing Tracks album contains tracks that allow you to experiment with modal scales. Modal scales are scales derived from the major scale, with each one having its own individual sound. Our backing tracks will help you learn and master modes on your bass guitar. See more information and hear sample tracks on this page.

Patterns show where the notes fall on the bass neck in relation to each other. This way, a single pattern can be used to play the scale at any fretboard position, and therefore in any key.

On the bass scales chart below, you’ll find patterns that will allow you to play the pentatonic minor, blues, and major scales in any key.

Why Is There More Than One Scale Pattern Included For Each Scale?

Bass guitarists learn and use multiple scale patterns for each scale. This allows them to play the scale at a convenient fretboard position.

If, for example, you only knew how to play a minor pentatonic scale using pattern no. 1 on the bass scales chart below, then if the song was in D you’d find yourself playing at the 10th fret.

Because that’s a relatively high position on the fretboard, your bass line would be missing out on some lower notes – basically anything under the 10th fret on the 4th (lowest) string.

If you knew multiple pentatonic minor patterns then you could extend the scale to incorporate all of the fretboard. By changing fretboard position while playing you could create fluid bass lines that went wherever your creative urge took them!

How To Use The Bass Scales Chart

The diagrams in the bass scales chart are scale ‘patterns’ or ‘shapes’. They depict where a bass guitarist’s fingers should play the notes in relation to each other, but don’t actually specify where on the fretboard the scale should be played.

Scale patterns do, however, show the root, or tonic, note of the scale. (On the bass scales chart above the root notes are depicted as the white circles.)

Therefore, in order to play a C major scale, you would play any of the major scale patterns shown above with the root note positioned at C note on the bass fretboard.

This means that, although learning scale patterns is the simplest way of learning scales on a bass guitar, you still have to know the notes on the fretboard.

Play the scale by positioning your hand so that the root note of the scale is positioned over the desired note on the bass fretboard (i.e. if you want to play a C major scale using pattern no. 1, then position your hand so that your middle finger is playing the 8th fret of the 4th (lowest) string.

To play a single octave of the scale, play upwards until you get to the next white (root) note.