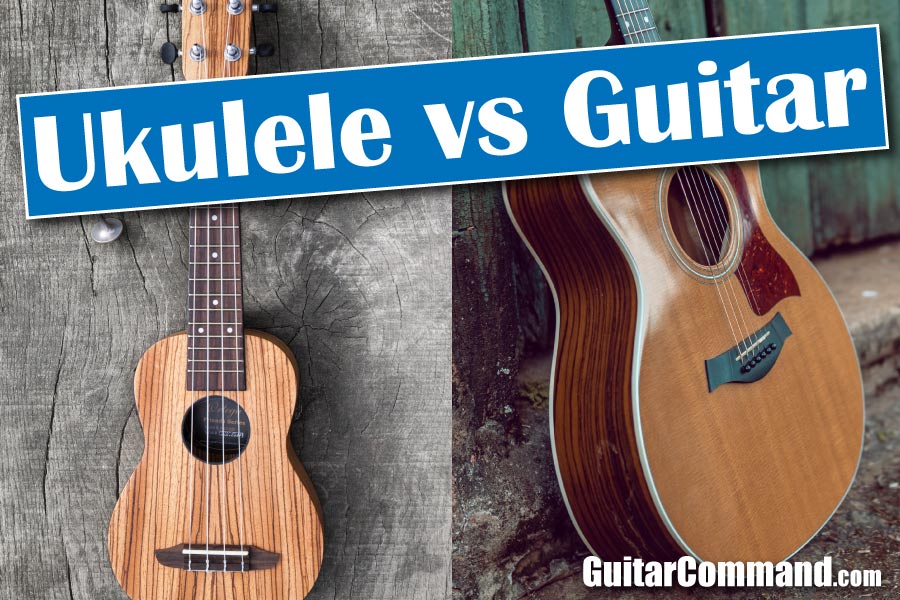 Ukulele vs Guitar: Which instrument should you learn? A complete guide to the difference between the ukulele and guitar…

Although the ukulele and guitar are both stringed, fretted instruments, and relatively similar in appearance, they are very different in terms of how they are played and what they are used for. The guitar, which is larger and has six strings to the ukulele’s four, is generally the more versatile, capable of playing lead lines and solo pieces, as well as chords. The ukulele wins out in portability, cost, and ease of playing.

On this page we compare the ukulele and guitar, taking factors such as music style, learning curve, size, price and more into consideration. So, if you’re looking to take up an instrument, and you’re considering either the guitar or ukulele, take a few minutes to read this handy guide to find what instrument is best for you…

Similarities Between Ukulele and Guitar

There are probably more similarities than differences between the ukulele and guitar. To an extent, anyone proficient in one would feasibly be able to play the other with a little bit of practise.

Learning either one of the two would definitely make playing the other easier. However, the ukulele should not be viewed as a gateway to the guitar, and vice versa.

Both ukulele and guitar are stringed instruments. That means they produce sound through the vibration of strings. Both are typically made from wood, with similar construction in the body area to provide depth of sound and resonance.

Similarly, ukuleles and guitars are both fretted instruments, which means that they have frets on the neck to mark musical intervals (semitones, to be exact), as compared to the violin or cello, which are stringed instruments without frets.

For this reason, players tend to play chords on the guitar and the ukulele. The guitar is more commonly used as a lead instrument than the ukulele, particularly when playing an electric guitar.

Differences Between Ukulele and Guitar

While ukulele and guitar are related, there are plenty of significant differences between the two instruments.

Chief among them is size: guitars are pretty much always bigger than ukuleles. This difference in body size affects several other factors, too.

Guitars have a larger note range and a bigger, more authoritative sound than ukuleles, due to their larger bodies and longer necks. The guitar can play far lower pitched notes than most ukuleles (as we’ll find out below, there are several different types of ukuleles).

Guitars, in addition to being bigger than ukuleles, also have more strings. A standard guitar has six strings, which are either steel or nylon, depending on guitar type.

A standard ukulele, on the other hand, has four strings. These strings are also tuned differently, although strictly speaking, guitar tuning is really up to the player.

The guitar is one of the most versatile instruments; you can hear guitars in pretty much every genre of music. They cover everything from mellow acoustic singer-songwriter music (think Ed Sheeran) to full-bore metal (like Metallica).

The ukulele is typically associated with Hawaiian music, and its mellow, soothing tones can also heard in “folky” music with a Hawaiian vibe. That’s a relatively narrow range of music, and although you don’t have to restrict yourself to playing relaxing, island-style music on a ukulele, the fact remains that it’s not quite as versatile an instrument as the guitar.

Ukuleles, being smaller than guitars, tend to be cheaper. Even an entry level guitar is usually around a hundred dollars or so, while you can find a cheap ukulele to learn on for as low as $20 in some cases.

Guitars simply use more materials to provide their larger bodies. Steel-stringed guitars also require more components, such as a truss rod, to reinforce the guitar under the increased tension of steel strings.

There’s no getting around the fact that the ukulele is regarded by many as being little more than a toy. This includes manufacturers, who don’t regard things such as tuning stability, tone woods and accurate pitching as being crucial factors in their products.

With that being said, the ukulele’s popularity has risen dramatically in the last decade or so, leading to more accomplished players and the availability correspondingly higher-quality instruments.

The four main types of ukulele are the soprano, concert, tenor and baritone ukulele. In addition, there are a number of other ukulele sizes available.

The soprano ukulele is the “standard” ukulele and the most common size. It is the smallest of the four standard types of ukulele and the instrument most people associate with the word “ukulele”.

Below is a chart showing the standard ukulele sizes and a number of other, less common types, with typical sizes and tunings.

Categorizing types of guitar is a little trickier. Broadly speaking, there are three main guitar families: electric, acoustic and classical.

Both the acoustic and classical guitar are “acoustic” in terms of sound production (i.e. they don’t require an amp), but they differ in terms of strings, playing technique and sound.

Most electric guitars are solid-bodied, like the classic Gibson Les Paul or Fender Stratocaster. As the name implies, an electric guitar needs to be plugged into an amp in order to produce a useable sound.

Acoustic guitars come in a variety of body sizes, but all are fairly similar and, unlike the ukulele, they don’t vary in terms of tuning. The variety in body sizes is usually to accommodate different performing or recording needs.

You can find out more about the different types of guitar on these pages:

Types Of Music Played on Ukulele

The ukulele is most associated with Hawaiian music. Its gentle, breezy tone reminds the listener of easy-going afternoons on the beach.

Of course, the ukulele, like any instrument, can be used to play pretty much any type of music, and you’ll find plenty of ukulele covers of various popular songs online. Perhaps the most famous ukulele performance is by Israel Kamakawiwo’ole’s “Somewhere Over the Rainbow”.

However, there’s no getting away from the fact that the ukulele is most associated with gentle, folk-type music.

Types of Music Played on Guitar

The guitar, on the other hand, can be used to play pretty much any type of music. The rise of the electric guitar coincided with the rise of music recording and technology in the 20th century, so the guitar became a prominent feature of popular music until relatively recently.

You can hear classical-style acoustic guitars in flamenco music, a lot of European folk music, and in many classical arrangements.

More modern steel-stringed acoustic guitars are most associated with the country, blues, jazz, folk, and rock boom of the post-war period, and persist throughout popular music today.

The electric guitar is indelibly associated with rock and roll, as its earliest proponents were the earliest heroes of the post-war rock and roll era.

Generally, ukuleles are much cheaper than guitars. Cheap ukuleles won’t cost you more than $20, and even a high-end ukulele won’t set you back more than a few hundred dollars.

Guitars, on the other hand, are another story. Entry level guitars usually cost at least a hundred dollars or so, and some high-end guitars can go for hundreds of thousands of dollars. A good, pro-quality guitar generally costs from $750 upwards.

On the other hand, if you have a keen eye and some patience, the second-hand guitar market thrives to this day. You can probably find a bargain on a second-hand guitar more easily than you could with ukuleles, simply because so many people have bought guitars over the past few decades.

See this page for information on electric guitar price:

How Much Is An Electric Guitar?

Ukuleles are significantly smaller than guitars. Even the biggest bass ukuleles measure up at about 32 inches total, while most guitars are 37 inches or more. Ukuleles have correspondingly smaller necks with fewer frets and a narrower nut.

Acoustic guitars tend to be lighter, yet larger in the body and thicker in the neck than electric guitars.

Being smaller and more lightweight, the ukulele is even more portable than the guitar, which itself is a relatively portable instrument.

Which Is Easiest: Ukulele Or Guitar?

The smaller size, more forgiving nylon strings, and fewer strings mean that the ukulele is, in general, easier than the guitar to play.

While it’s true that the learning curve of the ukulele is less steep than that of the guitar, playing any instrument can be challenging, and becoming proficient in either ukulele or guitar takes both dedication and practice.

The ukulele is typically used as a rhythm instrument, with strumming chords being by far the most common playing technique employed.

Playing chords is also an extremely common technique on guitar, but the guitar has a greater capacity for playing melodies and lead lines.

Guitarists use a variety of techniques, including fingerstyle, and various picking and fretting methods, to perform a wide range of music.

Because of the broader array of playing techniques utilised on guitar, the instrument has a steeper learning curve, and is considered to be harder to play than the ukulele.

Ukulele Vs Guitar: Other Considerations

The ukulele’s smaller size might be easier for smaller-framed individuals to wrap their arms and hands around.

Ukuleles are also typically strung with nylon strings, rather than the steel strings that are found on acoustic and electric guitars.

Due to the hard metal strings and high tension, playing guitar is physically demanding, and can even be quite painful at first!

It takes time to build up the finger strength and fingertip calluses necessary to play guitar comfortably; most beginner guitarists go through a period of sore fingers.

The same is true with the ukulele, but to a much lesser extent. The softer material and lower tension of ukulele strings are much more forgiving on the fingers, making the ukulele much less physically demanding than guitar.