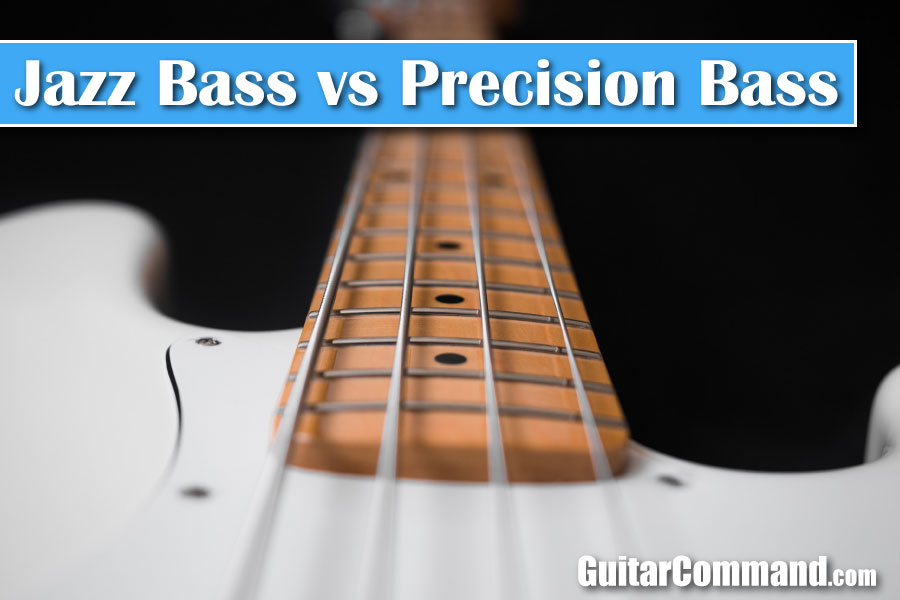 Jazz Bass vs Precision Bass: what is best for you and your style of playing? What is the difference between P bass and J bass? On this page you’ll find a complete guide to Fender’s iconic bass guitars.

Introduction To The Precision Bass And Jazz Bass

Leo Fender introduced the Precision Bass in 1951, and the instrument was the first electric bass guitar to garner widespread attention among bassists.

Tired of lugging their full-sized, upright double basses from one gig to the next, bass players appreciated both the convenience of the smaller instrument, and its ability to compete in volume with the horn sections (and new-fangled electric guitars) of the day.

The Jazz bass, introduced almost a decade later, featured numerous design changes that differentiated it from its predecessor.

Today, these ground-breaking bass guitars are among the best-known of all electric instruments, and are used by a multitude of players across a wide variety of musical genres.

On this page, we discuss the differences between the Jazz Bass and the Precision Bass.

We pay particular attention to the instruments’ respective construction, sound and playability. We also list famous bassists who use each model, and finally take a look at selected Jazz and Precision Bass models in Fender’s range.

Below is a round-up of the main differences between the Jazz Bass and the Precision bass:

You can see suggested Jazz and Precision bass models at a range of different price points further down the page.

The Jazz Bass (or “J-bass”), and the Precision Bass (or “P-Bass”), are Fender’s flagship bass guitars, and between them have defined the sound of electric bass for decades. You’ve almost certainly heard both of these instruments on hit records in virtually every genre of modern music.

The Fender Precision bass, introduced in 1951, was the world’s first mass-produced solid-bodied electric bass. At first, bassists accustomed to using traditional upright double basses were slow to adopt to the new instrument.

Some bassists, including Elvis’ bassist Bill Black, initially struggled to play an instrument that was held perpendicular to the body. Black eventually became one of the first big names to endorse the instrument. (Source Wikipedia)

The P-Bass did find a home among session musicians, starting with Wes Montgomery’s brother and bassist Monk Montgomery, the aforementioned Bill Black (on the set of Jailhouse Rock), and Wrecking Crew bass ace Carole Kaye.

The Jazz Bass was introduced in 1960, and was originally named the “Deluxe Model”. It was renamed “Jazz Bass” to appeal to jazz bassists.

Both the Jazz and Precision bass feature bolt-on necks made from maple. The necks have twenty frets, with modern iterations of both basses adopting Fender’s comfortable “C” shaped neck profile.

The Jazz bass has a narrower neck width at the nut of around 38mm, which slowly tapers as you get closer to the body. The P bass’s neck stays about the same size all the way up, from about 43mm at the nut.

Players looking to mix things up have been known to attach the neck of one bass to the body of the other. Players who find a tapered neck uncomfortable might use a P bass neck on a Jazz body, or those who prefer a tapered neck but like the P bass’s more understated tone might use the Jazz neck on a P bass body.

Both basses use a variety of woods for the fretboard, including maple, rosewood, pau ferro, or Indian laurel.

Both Jazz and Precision Basses feature double cutaways to facilitate playing higher up on the neck. The P bass was actually the first Fender instrument to feature double cutaways, and as a result it looks more like a hybrid of the Stratocaster and Telecaster than anything else. Its body was modelled heavily on that of Fender’s successful Telecaster guitar, which is easiest to see in its lower bout and control configuration.

The Jazz bass, so named to appeal to the same group of players Leo Fender was courting with his Jazzmaster guitar, features a sleeker offset silhouette, with contours to move the body away from the player’s picking arm. Both basses were designed to be comfortable to play standing up.

Generally speaking, the bodies of both bass guitars are built from ash, alder, poplar, or basswood. Old-school P and J basses of the 1970s used ash bodies, but even earlier models were typically made from alder. Ash-bodied basses usually have a brighter tone, while alder-bodied basses tend to have a darker, warmer sound.

One of the main differences between the Jazz Bass and Precision Bass is in the sound. The Jazz Bass was designed to have a more clearly defined, brighter tone than the Precision Bass. This was partially an attempt on Leo Fender’s part to bring jazz players, who wanted articulate bass tones for playing solos, into the Fender fold. Key to the tonal capacity of the Jazz bass is the option to blend the relative volumes of its two pickups. The bridge pickup, as with an electric guitar, has a more trebly sound, while the neck pickup’s tone is darker and warmer.

As a result, the Jazz bass is capable of a far broader tonal spectrum than the Precision bass. Being able to blend these tones is a major feature of the Jazz bass design.

The J-bass, when played with both pickups at full volume, has a characteristic “growling” tone that is widely used for slap bass playing. If you think of the scooped, aggressive tone of Marcus Miller or Will Lee’s bass playing, that’s a J bass with all the volume cranked. This is not dissimilar to the effect of playing a Stratocaster with two pickups activated, giving the Strat its distinctive “quacking” tone.

The Precision bass generally has a darker tone than the Jazz bass thanks to its single pickup. While players can shape their tone somewhat by altering their playing style and technique, the P-Bass generally isn’t as versatile or as aggressive-sounding as the Jazz Bass.

Its more muted sound has made the P bass a favorite among musicians who prefer their bass lines to sit low in the mix, adding power and presence. In contrast, P-bass players with a very aggressive picking style, such as Steve Harris of Iron Maiden, favor the instrument because its naturally warm tone balances out the high frequencies highlighted by their playing technique.

Bassists Who Use Jazz & Precision Basses

The Precision Bass is used in a wide range of musical genres, including jazz, soul, funk, punk, metal, and rock.

The Jazz bass, with its more ergonomic design, seems to appeal to virtuoso players, although this is not a hard and fast rule. The Jazz bass appeals to players across a variety of genres, with many of the greatest bassists of all time using this as their main instrument. Flea of the Red Hot Chili Peppers, and Geddy Lee of Rush are genuine “bassists’ bassists”, revered by their peers.

If you’re looking to buy either a Jazz Bass or Precision Bass, you’ll be happy to know that your choice of instrument won’t be determined by price. Both the J-Bass and P-Bass are priced very similarly at pretty much all levels.

Beginners all the way up to pros can find themselves a quality instrument, especially given Fender’s wide-ranging attention to quality control in recent years.

Total beginners are advised to look at Squier’s offerings. Squier is Fender’s budget subsidiary, making guitars from cheaper materials in China. Squier’s broad range of P and J style basses are very aggressively priced and are appropriate for beginners.

Of course, if you’re a serious bass player at the intermediate or pro level, you’ll want to invest in a professional instrument.

The good news is that Fender’s Mexican factory – which is only a few hours’ drive from their top-of-the-line California factory – produces great, pro-quality Jazz and Precision basses for those not quite ready to invest in an American-made instrument.

Sitting at the top of Fender’s range of basses are the company’s American-made “Professional” Jazz and Precision basses. If you don’t mind dropping some serious cash on a bass guitar, this is where you should look.

Bass vs Guitar: Which Is Best For You?