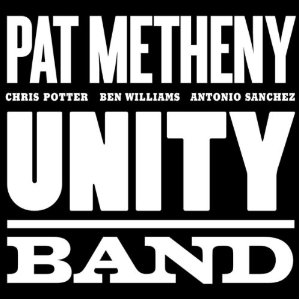 Guitarist Pat Metheny is one of the biggest names in jazz today. His considerable oeuvre includes projects as diverse as a collaboration with minimalist composer Steve Reich and an album of solo compositions written for Metheny’s own custom-made mechanical ‘Orchestrion’.

Prior to ‘Unity Band’, Metheny’s previous two releases have been solo works (‘Then And Now’, an album of guitar arrangements, and the aforementioned ‘Orchestrion’). Unity Band marks a return to ensemble playing, and Metheny has assembled a crack group of established and up-and-coming musicians to form an ensemble of the same name.

The Unity Band is comprised of renowned saxophonist Chris Potter, drummer (and Metheny Group stalwart) Antonio Sanchez and newcomer bassist Ben Williams. The nine original Metheny compositions on Unity Band offer plenty of scope for the musicians to shine, and they make full use of the opportunity to do so.

Unity Band opens with the laid-back ‘New Year’, which sets the scene with a typically lyrical Metheny theme. In the bluesy ‘Roofdogs’, Metheny returns to the guitar-synth sounds which were so much a part of his early work. ‘Come And See’ is introduced by more exotic instrumental sounds before a bass ostinato provides the groove for the rest of the song. Solos from Metheny and Potter (Potter’s complete with ‘Trane’ quote) follow before a sublime bass moment heralds a return to the groove.

‘Leaving Town’ features a typical Metheny theme replete with modulations and melodic twists and turns. ‘This Belongs To You’ and ‘Then And Now’ are trademark Metheny ballads – again lyrical and involving.

‘Signals’, the longest and most experimental track on the album, is introduced by Orchestrion sounds (controlled via Metheny’s guitar). All members of the band then contribute to electronic loops. The melodies created are reminiscent of Frank Zappa’s more ‘out-there’ compositions. The up-tempo final track ‘Breakdealer’, gives guitarist and saxophonist an excuse to let rip, their improvisations supported by the exciting rhythm section.

For those familiar with Metheny’s output, it is somewhat of a surprise to hear a tenor saxophone player included in the Unity Band – the first time in 30 years a horn player has featured in one of Metheny’s ensembles. Given Potter’s and Metheny’s similarly eclectic output, it is no surprise that their playing complements each other’s throughout.

Sanchez adds an extra dimension to every track on the album. Syncopations, polyrhythms and fills abound, creating a swirling and exciting rhythmic undercurrent. Williams’ playing is understated but solid; he holds the ensemble together, underpinning the tracks and maintaining the groove. When he steps forward he does so with aplomb.

Unity Band will please fans of all aspects of Metheny’s previous work; there are elements here from the nostalgic, acoustic-guitar driven ‘Beyond The Missouri Sky’ and the ensemble playing of the Pat Metheny Group albums. The virtuosic playing on display remains sympathetic to the needs of the underlying compositions, and the ‘wallpaper music’ feel that can dog jazz / fusion recordings has been banished. Unity Band nicely captures the energy of four extremely capable musicians playing off of each other, and the result is an inspiring album, full of wonderful moments and sublime musicianship.